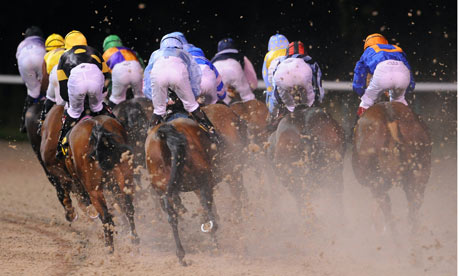 If picking losers was the aim of the game, February would be going right to plan! Unfortunately it's not and all 7 of my selections this month have ended up being defeated (two seconds). Fastnet Storm was the latest runner to fail to win and was yet another to trade low in-running, as he hit 5/4 in the home straight. This was after having a race run to completely suit him and I'm disappointed that he didn't put up a better fight in the closing stages. Regardless, I have my theories about horses who are out of form and being lined up for a punt, so I'd consider this to be his "back to form" run. He will remain of interest and should be taking advantage of his fairly low rating before too long. It's obviously frustrating to back losers but with the frost messing everything up, it's hardly a surprise. Hopefully normality returns as soon as possible.

One selection for today on what is another day of very, very modest racing. Hopefully Newbury will get the go-ahead for Saturday and we'll be able to get stuck into something decent but it's looking less likely by the minute. This month is certainly trying times for the majority of punters and unfortunately it hasn't been going our way either. Regardless, it's all about making money over the course of the coming years and we'll be able to do that without much bother. Once the flat season comes around, things will get very interesting! For now, it'd be nice if the frost would piss off and I could get stuck into some decent racing but alas, it won't just yet. Oh well, fingers crossed that this selection will win and best of luck folks.

There seems to be an exceptional amount of pace in this race and that may well hinder the chances of the rapid Grand Stitch gaining victory - if he's pressured too much after taking off in the lead. However, I don't think that he has to make the running (although he could still do it here) and should be very much suited to how this polytrack surface is riding at the moment. This 6-year-old speedster is on quite a long losing run but he's a very well-handicapped animal and is running very well this winter despite his form figures possibly suggesting otherwise. His turn is surely around the corner and with plenty to suit, 6/1 looks big.

Grand Stitch comes here on the back of a very good run over this C&D, a couple of weeks ago, when he was massively up against it in claiming company. On that occasion, he finished 5th of 8 @ 66/1 - beaten by just over 2-lengths. It's as good a run as he has produced this season and the return to handicap company, especially in a modest contest like this, has to be seen as a big plus. Quite how he'll perform if pestered at the head of affairs is beyond me but I'm sure that he'll prove a very hard horse to pass.

Of the opposition, Novabridge looks like the biggest threat, as the market is suggesting. However, he got quite an easy time of it when winning here a few days ago and I'm not so sure that today's race will be run to favour him. A 6lb penalty makes things tough and it'll be very interesting to see how he performs here, as I feel he was flattered last time out. 9/4 is a price not worth taking. No Mean Trick (3/1) is currently the second-favourite with the bookies based on his nose victory over a next time out winner when last seen but that was at Southwell and whether he's able to perform well enough to win off a mark of 70 on this different surface isn't something that I'd bank on. The race will be run to suit him at least but the very inexperienced 7lb claimer on his back would be enough for me to suggest that he's a no-bet at his price.

The rest of the field don't really interest me too much, although that's not to say that they can't win and they shouldn't be dismissed lightly. I still think that Grand Stitch offers the best value here at 6/1, even with the likelihood that he'll be forced to go off very fast at the head of affairs. Regular partner Neil Farley being on board to take off a further 5lbs is a plus and he's quite good value for his claim, especially in sprints. The Declan Carroll yard hasn't managed many victories of late (1 winner from last 40 runners) but at least the horse is shaping as if he's at the top of his game and he just needs a few things to fall his way in order to win. Today, that could well happen and I'm happy to take a chance at the current odds. I wouldn't have him as much more than 3-4/1 and hopefully he'll break my February hoodoo, along with his own losing run. This race is well within his reach, although he is the sort of horse who could drop out completely and isn't without his risks, quirks and has disappointed on a number of occasions since the last of his pair of C&D victories. Small/medium win stakes will do the job as usual given the very tricky nature of this race.