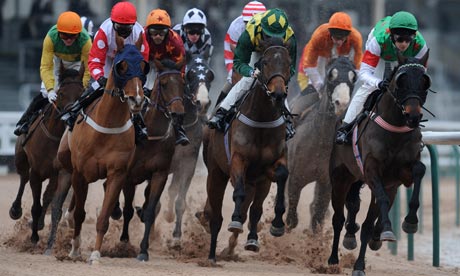 Haven't had any selections since Boxing Day so there's nothing too recent to update.

Binocular was my only winner from a total of six selections on that occasion but given how the day went in terms of the other runners, I was more than happy to get out without losing a small fortune. In truth, he was a very lucky winner and had the Paul Nicholls trained Rock On Ruby jumped the last better than he did, a very disheartening 16pt loss would have came my way eventually. Having had a near maximum bet on Binocular at the 2/1 available early on, he ensured that the loss only ended up being 4pts - which is bearable given how lucky I was.

Of the rest, Loch Ba could only manage a modest 4th place but he was heavily supported into 5/1 from 9's and connections had obviously hoped for a lot better than the end result. His jumping was poor in the first-time cheekpieces - as was the case on numerous outings without them - and once he improves in that department, there's more races to be won with him before the season is out.

Before the race he had sweated up too and got hampered near the mid-point of proceedings, so it just wasn't to be his day. Making excuses is always easy, but they're exactly what's needed to find worthwhile, value selections. I'll be on board again, albeit when conditions suit and at a track/in a race where his jumping won't be under as much scrutiny.

Both Master Minded and Knockara Beau were the most disappointing runners. The former obviously has his excuses and let's just hope that he'll see a racecourse again. The latter just doesn't jump well enough and will probably be opposed in the future, despite being a well-handicapped horse and one who could pop up at a tasty price when getting everything together.

Silviniaco Conti ran a cracking race to finish 2nd behind Grand Crus. Had he jumped better, I think he could have put it up to the high-class winner but he didn't and couldn't unfortunately. I'm quite sure that he's going to prove to be an exceptional talent over fences, in time, and it'll be interesting to see what Nicholls does with him. It's clear that he holds him in very high regard and having just turned 6-years-old, there's no rush with him at all. The only problem is that he'll never be much of a price and whether he'll be worthy of support again remains to be seen.

Like Minded was the final runner of the day and was well-backed before the race, eventually going off as an 11/2 shot. He ran a very good race to finish in 3rd place, beaten by just over 2-lengths. Given how well he made ground coming into the closing stages from well off the pace, before staying on well under pressure, I would have liked if connections made a bit more use of him earlier than they did. His hurdling wasn't too fluent either and overall it has to rate as a very good performance.

The leading trio were a nice bit clear of the rest, so how the handicapper will react shall be interesting. Given the fact that he's a Nicholls horse with a good last time out performance to his name, he's not going to be worth backing next time out unless it's in an ultra-competitive contest and I doubt I'll be on board. This was the time to catch him at a nice price and unfortunately, he just wasn't good enough on the day.

-4.00pts on the day, which ain't great but it could have been so much worse had Binocular not managed to get his head in-front.

Just the one selection for today, mainly down to how awful the cards are and the one that I've backed isn't a horse to put a whole lot of faith in either (I'm sure some will hate him!). The race should at least pan out in his favour, so it's worth taking a small chance on.

It's quite tough to find a dodgier bet than Bookiesindex Boy but he has always been a very capable animal and just needs the right man on board in order to help him to give his best - when he decides that he wants to, of course. Now, for the first time in a long time, Franny Norton is booked to partner this ultra-speedy 8-year-old gelding and if the cards can be played correctly, John Jenkins' charge could run a big race at odds of 14/1 in a contest filled with similarly tricky animals.

The risk is whether the cards can indeed be played correctly, as this animal is a notoriously tricky customer - as tricky as they come. He travels as easily as a much higher rated sprinter can, but he finds nothing off the bridle when asked to go win his races and that obviously doesn't help his chances if he has to dig deep, as he can't. You only have to look at his last two wins - both in well-run races over C&D - to see how talented he can be and now that he's a full 10lb lower in the ratings than the last of those, he could be primed to strike.

That last win was gained in February of 2011 when Bookiesindex Boy was a 72-rated sprinter. On that occasion, he beat a very useful Southwell performer in Where's Reiley, who was then rated 68 and well-supported throughout the day. He was beaten a length by my selection for today's race but went on to score by a very ready 4-lengths on his next C&D start a few weeks later, showing just what a good horse he is on the surface. Bookiesindex Boy absolutely cruised away from him and the rest of the field that day - which just goes to show what he can do when on a going day and when he's allowed to jog on without being got at by his rider.

Whether he'll be on a going day today, or not, is the risk, but I'm hopeful that his partnership with Franny Norton will eventually pay dividends if persisted with (he's placed 3 times from 4 rides on the horse). Norton is prone to some shockers but he gave this horse a cracking ride when finishing a half-length 3rd this time last year - in a similar race - when he was rated 9lbs higher than he is today and given how this contest is likely to be run at a rapid gallop, I'd be hopeful that the jockey will get to employ similar tactics. It's hard to know what sort of mid-race position he'll get from his sit in the lowest stall but I'll take my chances that it won't be too much of an issue, although burying him in the pack and running him into trouble is what's needed, so it could be tricky to do from there.

Ghostwing is the current favourite at 11/4 on the back of a solid, running-on 2nd last time out but he's a very tricky customer too. I wouldn't be overly confident about him replicating that form at all and although he could well win the race, or go very close to doing so, his price makes him opposable. I'd also question whether he's a proper 5f horse, especially at this track, and it may prove to be that 6f around here would suit him best - although this will be run to suit him at least. He's the obvious form pick but certainly can't be supported at the price (I'd want 5's at least).

Shawkantango is one that I considered strongly but his tendency to break slowly always makes him a risky proposition around here and the likely pace could see him get behind in the early stages if he's not completely on the ball. He clearly loves the surface and is a rare hold-up type who does well here but for numerous reasons he's worth taking on too. Plenty of the others are forward going runners and although that's what you want here, there's a chance that they could cut each others throats at the head of affairs - so backing any of them comes with a lot of risk too.

At least we're getting a nice price about Bookiesindex Boy and if he decides that he's going to play ball today, and wants to give his best, he could run a big race. There's no doubting his talent, you'd just have to doubt his application. Some of his recent efforts have been encouraging though (including when oddly responding to pressure at Kempton on his penultimate start) and with the yard seeming to be in good knick, it might be time to persist with this horse for a while (over this C&D only). He usually does his best in the early part of the year too and he's always sent off a worthwhile price. Anything down to around 8/1 makes him worthy of support but given his nature and unreliability, playing minimal win stakes is the safest thing. He could run a cracker, he could run a shocker - hopefully it's the former.