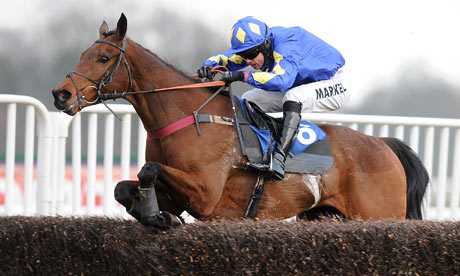 Aquarian Spirit ensured that winning ways continued with another exceptionally game performance at Lingfield. Surprisingly enough, the tactics used weren't what I expected and it hindered his chances of giving his best - which shows that he should remain competitive on polytrack despite the forthcoming rise up the weights. I actually expect that he could do much better if brought down towards Kempton.

As the race began to unfold in the home straight, Richard Fahey's charge looked likely to finish 3rd and I had given up hope of him winning as Hereford Boy blind-sighted him and went half-a-length ahead. However, my selection rallied exceptionally well to catch that tricky animal in the shadows of the post and registered career win number three, at the 21st attempt - his first on polytrack.

He also drifted in the market and given that my opinion was that 6/1 was too big, it was a surprise to see him open up at 12/1 on-course. There was a bit of money for him in the final minutes of the betting, as he went off at 9/1 - 12.5 on Betfair. It's easy to say now, but that was an excellent price and I had deemed him worthy to be no bigger than 3-4/1.

In that situation, it's probably best to go in again with another point - as I play the value game and although a drift can send out alarming signals, my stakes are based on how much value I feel the selection was. 9/1 was massive and it's a pity he wasn't at that price the night before, or I would have certainly advised a larger stake. Regardless, it was nice to get another good winner and the drift made it even sweeter.

+18.00pts on another good day. 2012 has certainly started off well and let's hope it continues. It's also very encouraging that the prices aren't being ruined either, which was happening almost daily when openly posting on the other sites I've used.

Three selections today but nothing that I can be overly confident about. Hopefully one of them could oblige and best of luck lads. Unfortunately the law of averages are scaring me and after a couple of winning days in a row, there's no guessing what may happen here...

Quite a wide-open contest in which chances can be given to many. Regardless, I feel that Rileyev is still going the right way and should be capable of getting involved here despite facing another 5lb rise in the weights for running a cracking second last time out. That leaves him a full 11lbs higher than his neck success at Newbury on his penultimate start but this game and likeable animal shows no sign of stopping his improvement and I'm convinced that today's conditions should help to see him in a better light. Whether they do or not is another thing but it looks likely and he's worth chancing at 9/2.

Rileyev finished a head behind the well-handicapped, well-backed and rallying Astracad at Cheltenham last time out and overall, I feel that form is more than decent. The only thing about Cheltenham that suits my selection is the stiff uphill finish and that run just shows exactly how capable he can be on his day, and how far he has improved throughout the last year. By right, he should have won that race and has to be considered unlucky to run into a horse who was so game and fairly treated at the weights.

A slight step up on that form at this track would suffice I feel, although I'm a little bit worried that today's contest is run over half-a-furlong shorter, as Venetia Williams' charge needs every bit of extra yardage that's available to him. At least the long run-in and stiff uphill finish at this track is going to be right up his street. The softer ground that he'll encounter today is also no bad thing and the race should be run at a decent gallop, which is exactly what he's after.

Rileyev won't be swinging off the bridle or anything like that but barring disaster, he'll be running on at the end and should prove capable of getting involved at the very least. I feel there's more to come from this improving young chaser, despite the fact that he's exposed looking, and small/medium win stakes should be played. 9/2 is hardly an amazing price but it's too big for this animal and all going well, we could see a return. Recent yard form is also encouraging and this fellow should be no bigger than 3's. Dave's Dream (9/1) rates as the second best choice and may be worth having a tiny saver on.

There's no doubting that Wymott was exceptionally disappointing at Haydock last time out as, despite being very strong in the market, he ran no race at all and finished the race having pulled-up a fair way from home. That doesn't bother me at all though, as Donald McCain's potentially very useful 8-year-old was never given a chance of getting involved in the contest. With the ground being so testing that day, no horses were making an imprint on their races from off the pace and being a relentless, one-paced galloper, this fellow had absolutely no hope of defying what others couldn't do either. I feel a massive, thick line can be scribbled through that run and we should get back to concentrating on this horses raw ability.

Wymott was originally thought of as one to contest the Championship races and he did exactly that at last years festival when running in the RSA Chase. McCain actually stuck cheekpieces on board the horse for the first time, saying that he didn't want him to pull up in front - that's how confident he was. However, things conspired against him and he ran no race at all, eventually pulling up with five fences to go. It later arose that the horse had injured himself, which explains such a modest performance from him and it's another that can be overlooked when it comes to considering him in the future - and here.

Now that Wymott has had a couple of runs since that injury, his race-fitness will have improved and given how well he ran in the Hennessy on his first outing since, where he didn't have things to suit, I feel that 144 has been confirmed as a very workable mark. I would be absolutely shocked if it happens that he can't win a race off this sort of mark and all going well, he could prove me right here. Just how well he'll be suited to going around this right-handed track is up for debate but it's a solid jumping test and he jumps as well as any when allowed to bowl along towards the head of affairs.

Connections have said that they'll be much more forceful on Wymott today and that's exactly what I wanted to hear. He has to be ridden positively and it looks likely that he'll be able to sit in behind a nice gallop here, or he could set it himself. The yard being in good recent form is also a plus and McCain is making a nice journey for just one runner. I slightly fear that he's being held for one of the handicaps at Cheltenham but it's a decent prize here and they seem to think that his handicap mark is workable, so let's just hope that it's all systems go today. If it is, this horse is capable of having a say in proceedings and looks overpriced at 12/1. I'd have him down as an 8/1 shot myself and he's worthy of support for a while yet. Small/medium win stakes will do the job again and even if he doesn't win here, I'm sure that we'll be collecting from him before too long. He's a very talented individual and this will eventually come out on the racecourse. Of the rest, I don't particularly like any of them and Donald McCain has a decent chance of picking up another winner if luck is on his side.

This is an ultra-competitive handicap hurdle and although Looks Like Slim may prove to be well below this level, he looks overpriced at odds of 22/1 and could be in the shake up if finding the improvement that I feel is there. Usually the big-field handicaps like these go to the more powerful stable and although Ben De Haan isn't the most fashionable stable about, he seems to have his small string in fine order - with 3 of his 6 hurdles runners since November ending up in the winners enclosure. It's clear that he's getting the best out of what is a limited bunch of animals and who knows, he could help this fellow to find the required improvement to go well here.

Looks Like Slim has form to turn around with Nicky Henderson's Higgy's Ragazzo - a horse deemed worthy of being a 6/1 shot here, despite going up 4lbs since his last outing. That came over the bare 2-miles at Kempton on good-to-soft ground, in which my selection was keen early and caught for toe in a modestly run race. In the end, he wasn't given a hard time of it once beaten and still finished less than 8-lengths behind the Henderson horse, who was gambled-on before finishing 2nd t0 his stablemate that day. It was obviously a much weaker race than this but I don't think it was a bad one at all and De Haan's charge showed plenty of promise despite not having the race run to suit. The way he jumped was also encouraging.

With an extra half-furlong today, softer ground and a much stiffer track, Looks Like Slim should be in his element. They should also go a quicker gallop from the off and he looks in dire need of that. The big-field should help him settle too, as he was keen early in that race last time out and with a featherweight of 10-0, a shock could well be on the cards. As I say, he may not have the class of many of these but I'm sure that there has been plenty left to work with and he's going to prove better than a 117-rated animal in time (just turned 5-years-old), so I'll overlook the quality of the race (in comparison to what he has been running in) and just concentrate on the circumstances. Everything will suit him and if he jumps like he did last time out, along with improving for having more suitable racing conditions, he could well outrun his odds. 22/1 is too big and a minimal win bet won't push the boat out too much. It's a risky one but he's not without a chance of getting involved.