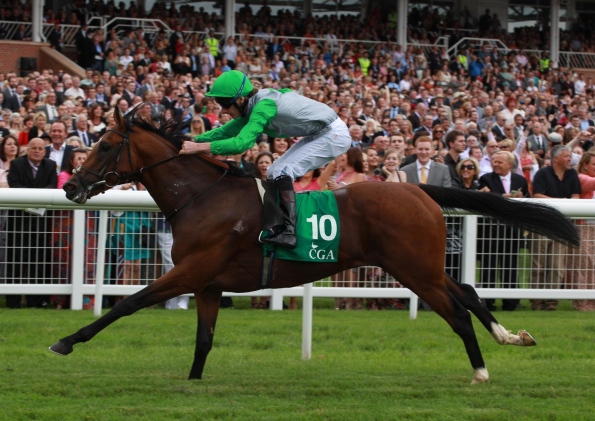 Saturday was another cracking day for us, the first really good Saturday in a while if I remember correctly. It all kicked off with David Barron's Tres Coronas bouncing back to form in impressive style at Newcastle, which was hardly surprising given how strong he was in the market. Returning the horse to a track that he clearly loves was a smart move and the ground came right for him also; that helped him to travel so very well throughout. It looked like he wasn't going to get a run through at one point - when still on the bridle - but Graham Gibbons didn't panic and timed his run to perfection, guiding his horse to a cosy win in the end. This was another career-best and he will remain of interest in the future when getting his conditions.

Saint Are again proved his love of Aintree by scoring gamely on his return to the track. The step up to 3m 1f clearly worked in his favour and although his jumping was sketchy on occasions, he seemed to be a lot happier than has been the case on his previous outings over shorter at Cheltenham. The fact that he still managed to win despite both me and Hugh Taylor posting him makes it an even better performance, as that's a 7lb penalty in itself! As a 6-year-old, there's every chance that he can improve again next season and will remain one to keep an eye on. If his jumping improved (and it would really need to), he could be a possible Grand National participant the following year. He's a work in progress, but clearly a big talent.

Plenty of money was riding on Killyglen in the National, but his jumping was very poor throughout the early stages and he eventually unseated his rider after blundering the Canal Turn. It would have been nice to get a longer spin than that, but he wasn't going to be in contention with such modest jumping and would have only prolonged the disappointment. I don't think I will ever pick a National winner to be quite honest!

Two selections for today, both coming at Windsor and both are quite decent prices. I wouldn't be overly confident with either for an array of reasons but they're entitled to run big races if on-song and hopefully one could oblige. Have a good day folks and it'd be rather nice if our recent change in luck could continue.

Paul Cole certainly knows the time of day and Moynahan will be backed if connections are expecting this tricky 7-year-old to run a big race on his return to turf. With a win record of 2-41, it's clear that this fellow doesn't find winning one bit easy and connections will be tearing their hair out, because he's not short of talent at all (rated 104 as a 3-year-old; finished 6th in 2000 Guineas). They must have been confident of ending his near 2-year losing run last time out at Kempton, where he was very well-backed in a claimer.

However, the race wasn't run to suit him at all and overlooking the run completely is the best thing to do. There's every chance that he'll come on for what was his first outing in four months. Coming back to turf should also suit and he's likely to get a much better tow into the race with so many rivals in opposition. I feel that Windsor is the sort of place that can see Moynahan to best effect and he ran a cracker on his only C&D start last year. That came off a 6lb higher mark in a better grade and he was little more than a length behind an in-form rival. Today, he looks exceptionally well-treated off a mark of 78 and this is the first time that he'll be lining up in a handicap off such a lowly mark, so he has to hold some sort of chance.

I don't think that Moynahan is regressive at all (as his last couple of efforts may suggest), he's just very reliant on everything falling his way and with ground to suit, a solid pace looking likely and Jimmy Fortune being on board again, a big run could be in the offing. A few of the main rivals look open to a fair amount of improvement, but the majority of those are priced accordingly and I'd much rather take a chance on the 12's about this fellow. He's Paul Cole's only runner, the jockeys only realistic chance of a winner from his two rides and is a class above these if he consents to put it all in. Getting him to do that is the main issue, but Fortune is one of the best jockeys in the weighing room and hasn't ridden this fellow too often. He will eventually get the horse to give best and hopefully that will be today. He should be around the 8/1 mark.

No fewer than 16 runners are set to line up for this race, which is to be run over the flying 5-furlongs and thus makes it a contest in which finding the winner is exceptionally tough. Having a double-figured stall could prove to be a modest place to be but I'm still going to chance Sutton Veny, who sits out in stall 16. At least she should be ideally suited to the likely rapid pace and she likes to race on the speed as well, something that is usually handy around Windsor, but a lot will depend on where she can be positioned. It's her first time to visit this track since her debut, a race in which it's impossible to take much out of and there's no guarantee that the layout will suit her, but I'm fairly certain it will and that she'll be right at home.

Sutton Veny has improved a fair amount with age and as a 6-year-old now, I expect that she can have even more success on the track this time around. 4 of her 5 career wins have come on the all-weather, but she is equally as good on turf and looks nicely handicapped off a mark of 85. She's now 2lbs higher than when nosed out of gaining victory in a very good handicap over this trip at Ascot in September. A run that would be somewhat similar would be enough to achieve victory here I feel and there doesn't seem to be any reason why she can't perform to that level. If anything, Windsor will suit her a lot more than Ascot.

Adam Kirby is usually an excellent indicator as to when Jeremy Gask fancies a horse and the pair have a highly impressive 20% strike-rate, with 10 winners coming about from just 50 runners. Interestingly, their partnership on turf has resulted in zero winners from 12 runners but 4 have placed and there's no point in putting too much emphasis on that. Kirby has partnered Sutton Veny to 3 wins from just 7 rides and he's well able to get the best out of her (their form reads; 1-1-1-4-8-4-4). The main risk is how well the mare can go on the back of a break, but she ran a cracker first-time-up last year and will hopefully do the same this time around. I'm worried that she won't be ridden prominently, because that could completely ruin her chances of being effective around here but 10/1 is on the large side regardless and I'll play a standard sized stake as per usual. Any market movement will be interesting and I'd have her down as a 7/1 shot.