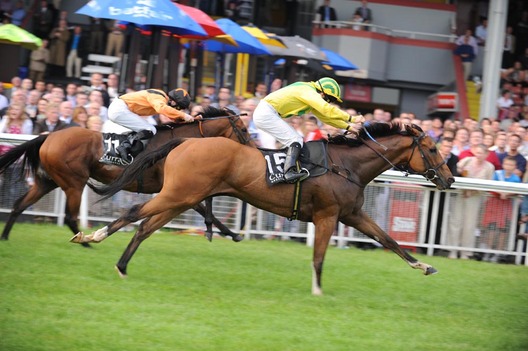 No joy with our pair on Saturday. First Post would have been in with a much better shout if he was drawn on the other side and I think that his performance was ultra-encouraging for a long time. He will definitely remain of interest throughout the season. Eton Forever also ran well, although you'd have expected that at the very least seeing that he was the favourite for the race. It just seems that he's not as good as I had thought and I'm probably going to leave him alone for the rest of the year, although I've said that before!

I'm absolutely delighted that I didn't punt on Sunday, because I would have steered myself and all of you towards losers. There were plenty of relatively surprising results, ones that I couldn't have predicted and sitting it out was justified. Doing likewise today might be the smart thing as well but I've found one bet that I'm willing to take a small chance on and hopefully he can get us off to a flyer on the flat. He could do pretty much anything though and certainly isn't one to be lumping on. The fingers are crossed and have a good day folks. To anyone who e-mailed me over the weekend; I'll get back to you as soon as is possible!

No fewer than 15 horses are set to go to post for this 6f sprint, which makes finding the winner a very, very difficult task. It seems as if a high draw could prove advantageous in this and Whozthecat looks ideally positioned from the highest stall of the lot. Declan Carroll's 5-year-old is a very frustrating sort and doesn't win near as often as his ability suggests he should (went 0-16 throughout last year), so he comes with a lot of risk straight away. He seems fairly straightforward though and it is very likely that he'll find 6f on fast ground at this dead-level track to be his optimum conditions. I don't believe that he has had his conditions too much throughout his career and it'll be very interesting to see how he fares, because he should love it.

For the first time on turf, Whozthecat will be running off a mark in the 70's and so many of his efforts last year suggest that he's capable of outrunning this mark by quite a long way, leaving him with the look of a very well-treated animal. It doesn't seem that being fresh from a break causes him to run below his best and there shouldn't be too much worry in backing him first time out. I am worried as to what connections will have planned, as the trainer is a very tricky man to predict and the market will probably indicate our chances of being successful. I'm willing to overlook that though - and the fact that the jockey on board isn't very good - because 7/1 is just too big (9/2-5/1 correct). If the horse is "on the job", he'll be running a big race and hopefully it'll be enough to see him land career success #4. Small/medium win stakes will suffice again, although I'd be tempted to have a bit more on if it wasn't such a testing part of the season.