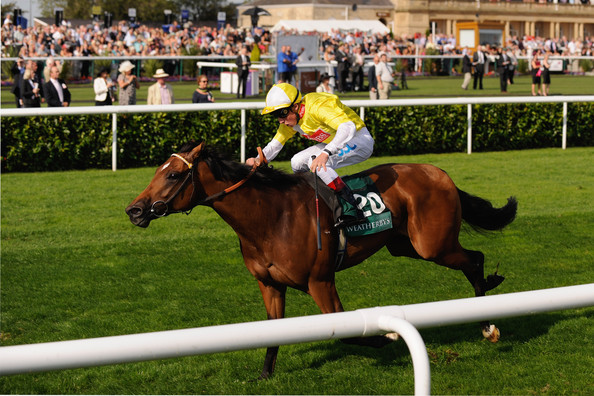 Taurus Twins ran a stormer on Wednesday and just like his previous outing, he probably went off too hard and was always going to pay for that. The raw speed that he has is phenomenal and he looks like an improved horse to me this time around, one that could be up to winning a nice handicap before too long. In the end, he finished 3rd here at 14/1 and would be of interest if he gets into the Dash on Oaks day. It's possible that he might need to go up a few lbs to get in though, but connections have enough time to try to achieve that. This is most certainly a sprinter to follow and I'm hopeful that he will be winning a good race.

Henry Candy had his reservations about whether his filly Gosbeck would handle the very testing ground, but I don't think that she had any issue with it at all. I said that I was hoping that she would be positioned more forward than usual and that just didn't come to fruition, as she was held up towards the rear. Such tactics aren't going to suit a filly like her and she had to use so much energy just to get into contention that she was spent coming into the final furlong or two. It was an ultra-pleasing return though and there'll be races for her to mow down in the coming months, with better ground being likely to help her chances a lot.

Right Step has been the bridesmaid for so long and it was brilliant to see him getting his head in-front of a very decent handicap field on the flat for the first time ever, which is quite staggering. Jim Crowley, as usual, was brilliant in the saddle and rode the horse to win just like many of those who beat him in the past have done so. As the trainer alluded to afterwards, the horse has got a name for being ungenuine when in fact he's the complete opposite and has just been so very unfortunate on numerous occasions. He won cosily here, despite drifting to 14/1 (massive 20/1 on Betfair!) and is capable of defying a rise in the weights. A good ride is all that's required to see him win and if he was mine, Crowley would stay on.

Some decent races today in terms of class but none of them are betting propositions. I've managed to find a couple of worthwhile bets in some low-level sprints, albeit tentative ones. They're nice prices at least and hopefully one could be good enough to do the job. Have a good day folks and the best of luck.

It usually pay to be drawn high over the 6-furlongs at Doncaster and as a result, Vizean becomes a rather interesting proposition despite her possibly fragile state of mind. This now John Mackie trained 4-year-old filly lined out on 8 occasions last year and remarkably filled the runners-up position on 6 of those, with all coming in maiden company. The bare form of some of those runs wouldn't be overly spectacular, but I'm fairly sure that she has the ability to defy a mark of 67 and just needs a bit of luck. Justin Newman, whom I rate quite a bit (very good in sprints), takes over and takes off a further 5lb, which is sure to come in handy.

Vizean is not sure to be at home on this quite testing ground (unraced on worse than good-to-soft), but she does look like the type who could be right at home on it and hopefully that'll be the case. Both of her runs in handicap company to date have come over 7f and around bends. Whilst she could probably get away with that trip, she's much more suited to straight tracks and this is the first time that she has got something like her optimum conditions away from maidens. In truth, this isn't much of a race despite the large field and if she's wound up after a break (off since October) then a big run could be a possible. She is also the type who should improve more this year and it'd be exceptionally disappointing if a mark of 67 can't be defied. I hate getting involved when I'm not too sure about a few of the more important aspects and a minimal win bet shall suffice. I should have a little bit more on, but this filly isn't to be trusted I'd say.

The other selection was a non-runner.