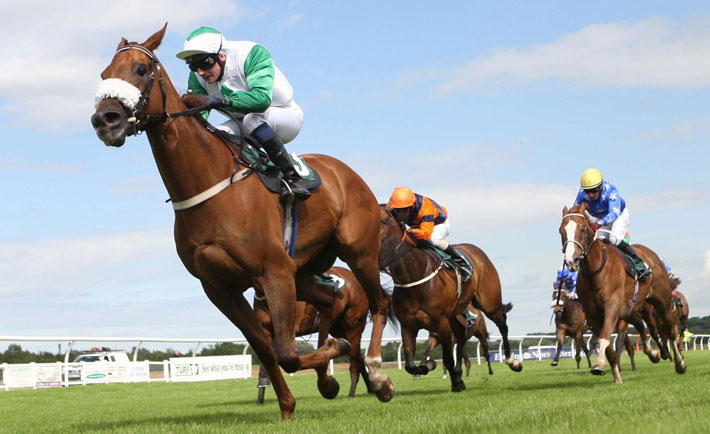 Another day in which my selections run really well but fail to win. It looked as if Highland Knight was being produced to come with a winning run in the home straight but, as he has done before, he hung away his chance and didn't look overly comfortable under pressure. There's every chance that he'll improve for the outing and there's a nice handicap for him over the summer when it looks like he'll get a race run to suit. It's disappointing that he couldn't go on to win this when it looked like he would (hit 2.10 in-running) but I'm confident that we'll catch him again at some stage throughout this season, hopefully at a tasty price.

Parisian Pyramid was very strong in the market, as he was backed from 14's the night before (although that didn't last long) into a starting price of 9/2. I was fairly confident that we'd be getting a really good run for our money and in fairness to the horse, he ran a very big race considering how fresh and keen he was throughout the early stages (also reared badly in the stalls beforehand). The race didn't really pan out as I had hoped and I think that his 4th place represents a very good seasonal return, so he'll remain of strong interest for a while yet. It's unlikely that he'll be getting the chance to run in any 7f handicaps at this sort of track and I really think that this was an opportunity missed for connections to get this frustrating sort to win a race. I'd imagine he'll be back into big-field h'caps at more conventional tracks and I'll keep him on side.

Frustrating stuff of late, because the vast majority of our runners are going really well but failing to win. I'm quite happy with my own judgement though, as I'm opposing the right favourites and correctly figuring out how the races are likely to pan out. The only problem is that I'm ending up on the wrong horses and that's a fairly big problem! With some luck, we would have had a cracking last week or two but that's how things go on occasions and we just have to ride out the storm. I had a similar run to this at the beginning of the flat last year and then hit a very hot spell, so here's hoping that history will repeat itself before too long. It's rather difficult at this time of year anyway as there's so many unknown factors but we will keep chugging along. Winning on any given day doesn't matter; it's the long-term that counts, and we will be winners.

Today's racing is rather difficult but I do like sprints and I do like punting at Musselburgh, so I've managed to find a pair of selections in Division 1 & 2 of the 5f sprints. I'm being overly cautious as per usual, and repeating myself, but neither are overly solid bets that you could lump on, so don't go mad with the staking if you're not following mine to the letter of the law! They should run well if all pans out as I expect it to and hopefully one could oblige. Have a good day folks and a good night too if you're off out on the beer! I might be heading off for the night myself, so there mightn't be anything for Monday (will update tomorrow). We won't be missing much; the only decent meet is at Fairyhouse and I refuse to get involved in Irish racing.

I don't care whether he wins or not but Arganil should never be a 3/1 shot here and taking him on is the smartest thing to do. I don't think that this easy track will help his chances and although he was a quite impressive winner last time out, that came over a furlong further on quicker ground and he looks like a horse that needs 6f nowadays. Today's slower ground won't inconvenience him but I still think that he's going to be swept off his feet in the early stages and his usual late rattle mightn't come soon enough to see him hit the frame. He could still win for all I know, but 5's is the least that I'd want and I'm opposing.

Ingleby Star is the one that I'm going to take him on with, even though this 7-year-old will have to perform to a level that he has never reached in the past. Being a 7-year-old makes that unlikely but these sprinters are very strange animals indeed and he had shaped as if being a horse on the up when landing back-to-back races for the first time in his career back in August & September. He can be rather hit-and-miss, so I wouldn't be one bit surprised if he ran a poor race and his trainer, Ian McInnes, isn't the most consistent trainer either. His yard seem in good knick though and this horse should improve for the two runs he has had on the all-weather in the past couple of months (performed badly both times but had valid excuses).

The main cause for hope is how well Ingleby Star can perform at this track when he's on song and I'd be hopeful that he'll be getting a race run perfectly to suit also. Being drawn high is vital over 5f around here, especially when there's a bit of cut in the ground and this speedy gelding has a perfect sit in stall 9 of 10. His last run here ended in an impressive 2.5-length victory over a rather decent (C4) 14-runner field and although effectively 7lbs higher here, the manner of that win suggested that he would be no forlorn hope off this higher rating if lining out in a similar vein of form. Obviously his recent form isn't mind-blowing by any means, but he does improve for his racing and had excuses as to why he underperformed. Returning to turf at a straight track will almost certainly help and I feel that he's a shade overpriced at 14/1. Plenty of risk is involved in backing this horse/trainer combination but a small/medium sized bet won't break the bank and a big run should be on the cards if he's readied to give best. Hopefully that will be the case.

Jim Goldie is a tough man to read at the best of times and this race is made even tougher by the fact that he has two lively contenders in it. Rothesay Chancer is the one that offers the most value at the current prices and I'm happy enough to take a chance on this 4-year-old progressing even further. Last season, this progressive sort never ran a bad race in any of his 11 outings and won 3 times as well, improving the guts of 20lbs in the ratings. 2 of his trio of wins and 3 of his places came over C&D, which clearly shows his liking for this track and I think that he's always likely to run a big race here if the pace is strong enough to see him perform to his best. It looks likely that there'll be a good gallop on today and with a sit in stall 10, he should be ideally positioned to take advantage if he can just go the early pace (which is a worry).

Rothesay Chancer does have plenty of form entitling him to run a big race off 73 here, as he was a very close-up 2nd in a similarly hot contest over 6f at Haydock when rated 3lbs higher and also placed here off 4lbs higher. His last victory came off a 3lb lower mark but he is the type to go on as a 4-year-old and I think that he can pick up where he left off last year by resuming his progression through the ranks. The ground will be perfect today (should help to slow down the speedier rivals) and Lee Newman hopping on board for the first time is another plus (I really rate him). Whether Rothesay Chancer will be tuned up fully for what is his seasonal reappearance is beyond me but he ran well first time up last season and hopefully it'll be the same again today. Again, he comes with plenty of risk but 13/2 is a couple of points on the large side and I don't see a whole lot of difference between him and his seemingly regressive stablemate; the booking of Fallon is the main reason for his price, although he's well-handicapped and goes well fresh. He's just simply too short for me. Small/medium win stakes on the lesser favoured Goldie runner is the call for this one and I expect a good showing. Whether it'll be good enough to win is another matter, but this consistent horse is certainly capable off his current rating and is open to further improvement, I hope!