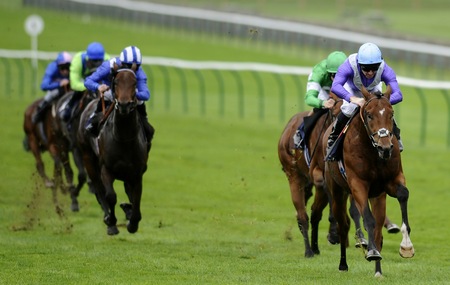 Another second place courtesy of Yurituni, who ran an absolute stormer in defeat and it was as good as she has ever performed. She showed oceans of speed to lead the field a merry dance and looked as if she could hold on when entering the final furlong, but sadly for us the favourite came bounding through with a storming run and that was that. He clearly had plenty in hand at the weights and it was unfortunate for the Johnson Houghton mare, who deserves to win again. She's yet another to keep an eye on in future.

Not many races of interest today, which is rare enough for a Saturday. We are having two anyway but I do not exactly know very much about the jockeys and that adds an obvious amount of risk to the selections. We're due some good fortune anyway, given the recent exploits, and hopefully neither of them balls up what I believe are winnable opportunities for their mounts. Have a good day folks and fingers crossed.

Edit: Found another over at Newmarket that's worth chancing.

Boom And Bust will be tough to beat if replicating his Goodwood run, in which he overcame a truly horrific draw to perform as well as he ever has and he's the obvious one in what is a competitive handicap. At the same time, it's just over a week since that outing and he could find this coming far too soon. Hopefully it will, because I think that he's the complete opposite to a value bet here and must be opposed, despite the possibility of more improvement being likely from this unexposed gelding. Stevie Thunder is the one I will plump for, in the hope that this 7-year-old will race handily and get a decent pace to run at (likely), because he will need to if he's to be seen at his best on the round course at Ascot. Ian Williams' charge does have a cracking course run to his name, albeit on the straight one, in which he finished a close-up seventh of 30 in the Royal Hunt Cup. He was a big price that day, but traded at around the 2/1 mark at one point after travelling into contention going quite well and if he's in the same form here, then he should be a big player off what is a 3lb lower mark. Since then, he raced twice, bombing out on one occasion before running a lot better last time, when second over a trip too short at Newcastle. That showed him to be on fine terms with himself and based on some of his runs towards the end of last season, his current handicap rating is far from insurmountable when the cards fall his way. Ian Williams seems to have his string in good order of late too and Yutaka Take does at least have plenty of previous course experience, though he is terrible to look at in the saddle. With some luck, Stevie Thunder should have a say and he is certainly overpriced.

Result - Withdrawn; Well-backed but wouldn't go into the stalls! Argh!

I have long been of the opinion that Desert Law is a true 5f performer and if he was mine, that'd be the trip that I'd solely campaign him over. Today, Andrew Balding's relatively unexposed 4-year-old will be having his fifth outing of the season, his third over the minimum distance, and I think that he has a good chance of getting an overdue, deserved success. We supported him when he ran in the Epsom Dash, an ultimate test of speed, and he ran a cracker to finish a half-length second, finishing behind a well-handicapped & rejuvenated rival. His other run over this trip came two weeks ago, over today's C&D and he would surely have finished closer to the main protagonists had he not slipped as the stalls opened, thus forcing him to race from the rear of the field. That's not one bit ideal, considering he's best when tracking the speed and hopefully that's what they'll send him out to do today, as he should get a nice toe into the race. The ground conditions are vital to him and the faster it is, the better, as pretty much all of his form suggests, and he's got conditions to suit today. They were ideal in that C&D outing last time out as well, but the slow start put paid to his chances of getting involved in a race where it was tough to get involved in from the rear and the fact that he was able to run on into a never nearer 2-length eight bodes very well in my opinion. This is his sort of track and with the yard, and himself, being in good knick, everything points towards a good run. I'm again not too sure about the jockey, but at least the horse isn't a complicated ride and hopefully Cristian Demuro won't be trying anything too flash. They've got a good chance anyway and a medium stake will do.

Quite competitive stuff here and the least exposed performer, Zumbi, can take advantage if managing to overcome the fact that he hasn't run since the middle of April. Sir Michael Stoute is well able to get them ready anyway and if this 3-year-old son of Dubawi is ready to roll, he should prove capable of playing a hand in this. As a juvenile, this well-thought of individual only ran twice, first winning an Ascot maiden in July before running a cracker in the Group 3 Ascomb Stakes at York. He travelled nicely on that day and looked sure to go very close when nudged into contention with a furlong to run (hit 1/5 in-running), but his inexperience told and he backed out of the equation to finish a 2-length third. I think that he was the best horse in the race and he just couldn't show it on the day, whilst connections were expecting him to be a better animal this time around anyway. He was in the Guineas as well but did not take up that entry after disappointing on his only other career start, earlier on this season. He was sent off as an odds-on shot that day, over this trip on the Rowley course, but the race simply wasn't run to suit. There was no pace on at all and when the tempo lifted, he got caught flat-footed along the rail (hadn't much room). He ran on well once switched off it and although many will think that he was crying out for another furlong, I just think that he wants a proper pace to run at. It looks like he'll get that here, with a few forward-going types lining up and that's an obvious help. The ground should pose no issues either and when Pat Dobbs rides for the yard on turf, he has a 26% strike-rate, with 6 winners from just 23 rides. It's impossible to know just whether the horse will be readied to give his best here, but he remains a lovely type who's open to further improvement and I think that his mark of 101 is exploitable, especially getting 6lbs from the older runners here. He could be anything from a handicap blot to a major disappointment, but he's worth a go in a race where there aren't too many open to as much progression as he is. Hopefully the lay-off is not an issue.