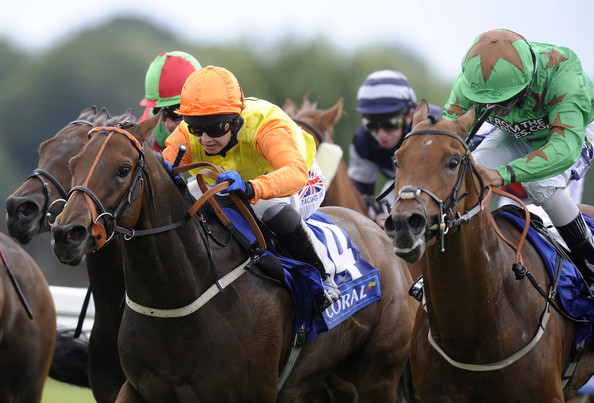 Desert Law finally got the win that he deserved, but it was quite a fortuitous one as the runner-up surely would have won if given a more vigorous ride inside the final fifty yards. Our fellow showed a lovely change of gear to hit the front around a furlong from home, then got narrowly headed before battling on gamely to get back in-front right on the line. He was ridden to perfection by Mr Demuro, who stalked the pace along the rail before producing the confirmed stayer to make use of his best attributes, and was strong enough to keep him rolling once the going got tough. He was rewarded here, but it was a lucky win in many ways.

Sadly, Zumbi did not get the same amount of luck in-running and I am convinced that he would have won rather cosily if getting a clear run through. He was held up in rear by Pat Dobbs, who did little wrong in my opinion, and was always seen to be tanking along but unfortunately couldn't go anywhere once the sprint for home developed. That cost him valuable lengths and the way that he powered home towards the end of the race, once finally getting an out, makes it a tough defeat to take. He was a Group horse running in a handicap and did remarkably well to end up beaten by little more than a neck considering how it panned out. Connections will surely step him up in class and when getting a proper pace to run at over 7f or 1m (not always the case in pattern company), he can step up again on this performance. There's also every chance that he'll come on for the run, seeing as it was an age since his last outing, and he's hardly what you would call an exposed performer either. I will be fairly surprised if he fails to win a Group 3 sometime.

The other selection refused to enter the stalls, which is a pity as he was backed from 12's into 6/1 and it's a massive positive for horses coming from that yard. The race was also run to suit, had he got his usual prominent position. Annoying, but he remains one to keep an eye on for a while. This is his time of year.

One selection for today, it's nothing to shout from the rooftops but has a chance if all is well and is worthy of support for an in-form stable (looks to have no excuses). Fingers crossed and have a good one folks.

There's no doubting that Konstantin is a quirky animal, but they're usually the ones who are overpriced in spite of getting conditions to suit and I believe that Marcus Tregoning's 4-year-old has plenty in his favour today. First off, in order to support him, we're going to have to ignore a couple of bad runs, the latest being an absolutely dismal performance. However, that came in a decent handicap at Newmarket, on the July course, and he didn't get away from the stalls too well at all. That was hardly ideal, with none of the hold horses doing too well and he usually races prominently anyway. It's worrying that he was being scrubbed along pretty much instantly, something that's very strange for a horse who usually travels supremely well. I think it's wise to just put a line through that run, because he just wasn't at the races on that day. Previous to that, he was below-par at Epsom, a track where he has won before, but was forced to race rather wide throughout due to a poor draw and again, nothing could make any inroads from the rear of the field. It is a race best overlooked as well. Back in May, the outing before Epsom, he performed excellently in a decent Goodwood handicap in which he was sent off as the 5/1 favourite. He tracked the winner throughout, in a race that was run to suit, but seemed to refuse to quicken once asked and held his head awkwardly under pressure. He did, however, keep on quite strongly to end up being beaten by little more than a length and is clearly capable of winning such a race if in the mood, so to speak. Today, he's competing in an easier event against far weaker opposition and it may prove that he's more in his comfort zone when carrying a bigger weight against inferior opposition. I don't believe for a second that he's caught by the handicapper, despite being 4lbs above his last winning mark and he remains an unexposed type who's open to further improvement. Some headgear and a drop back in trip (bred to be a sprinter) wouldn't go astray but this is the sort of track where he can be seen at his best if putting it all in and he looks to be worth a chance at a nice price. The Tregoning yard are hitting form at the right time, with three winners from just 11 runners already this month (same total as both June & July from 34) and they come down to the track with just one runner, which I doubt is for no reason. They've had success at the track in recent years, with five winners from just 25 runners and the only time they came down here this year resulted in a success, albeit with a 3/1 shot. Hayley Turner has an excellent record for the yard as well, with a 27% strike-rate on turf (33% for the owner) and even more importantly, she gets on well with this quirky individual, being the only jockey to win on him (3 from 8). It was in August of last year when he came into his own, winning twice, and I hope that history will repeat itself. The market should prove informative given the yard that he's from, but at least we know that the ground is perfect, the track will suit and the race will also be run to favour him. The only worry I have is if they don't race him prominently, as you'll rarely get away with being held up at Folkestone and he needs to be up there to show his best. It's a risk worth taking at the same time and if the horse is being sent out with the intention to try to win, he should give it a good shot. The usual stakes shall apply.