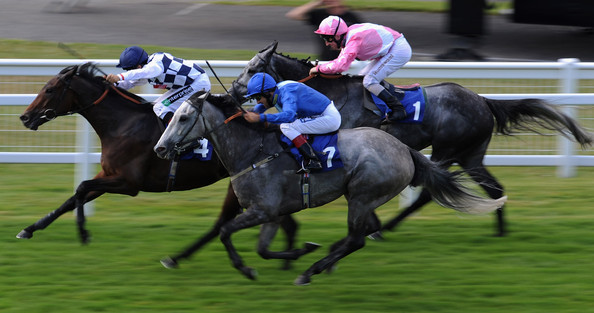 Saturday's punting didn't go to plan at all with, firstly, Fast Shot failing to land a blow after succumbing to a ride that was only going to end in defeat. You needed to be on a runner who would be tracking the pace at worst and he was held up towards the rear, tactics that gave him an impossible task. There'll be plenty of other days for him anyway, with a tilt at the Ayr Silver Cup being on the agenda next month and hopefully he will get cut in the ground, thus giving him every chance at a track that will suit. It'll be a very tough task though, with a crazy amount of runners lining up but at least that means he'll get a proper race-pace. He'll have a chance I think and should be a nice price as well, given this run, so remains one to keep on side.

It looked like it was "all systems go" for Alben Star in the feature race, as he was smashed in the betting to eventually go off as a 5/1 shot, half the odds that were available in the morning. Sadly for us, he broke away awkwardly and probably used up too much energy to get back into the tracking position that should have been already in force before then, which ultimately proved costly. At the furlong pole he lay in second place but had no chance of running down the all-the-way winner and then dropped out of contention. The chances are that he'll prove better back on a flatter track and hopefully he will turn up for the Ayr Gold Cup, where I'd quite fancy him despite this being a below-par effort. Would be nice if Tony Hamilton wasn't on board though - I just can't rate him and it'll be good if Hanagan can hop up again. Best to forgive this run.

Just looking back at the results from this meeting last year and I'd kill to be able to replicate it again. From a total of 12 selections, we landed a 3pt bet on 11/2 shot Sea Moon and 1.50pts e/w bet on Margot Did in the Nunthorpe, tipped up at 33/1. Also got place money from Lechevalier Choisi (1pt e/w @ 33/1) and a bit more from Apache (1.50pts e/w @ 12/1). The total profit to advised prices was +68.63pts, most of it from Margot but it just goes to show how quickly things can swing in your favour in this game and hopefully we will do as well this time around, though it will certainly not be easy. There's little to shout home about on day one, but we have three to cheer on, including a couple of nicely priced runners, and hopefully they will get the luck required to get involved. I see no reason why they can't (yet!) and fingers crossed. All the best.

Competitive stuff here, with plenty of runners being able to be given a chance. The favourite was one who I was really interested in, as I think that he could be a Group horse in time but the price has gone thanks to Tom Segal and the Racing Post boys tipping him up, so he must be opposed despite the obvious claims. For the second time this season, I'm going to plump for Doctor Parkes and hope that he comes here at the top of his game, because he must be a very lively contender if doing so. Apart from the favourite, there are not exactly too many unexposed potential improver's in the line up and this Eric Alston trained 6-year-old is one of the better weighted contenders off a mark of 90. Despite his age and exposed looking profile, he remains capable of running beyond his current rating when circumstances will allow and he did exactly that when running a stormer in a five-runner conditions' event at Nottingham little more than a week ago. On that occasion, he finished 2-lengths behind Dinkum Diamond when returning from a couple of months off the track and that performances reads so well, considering that he would have been a full 13lbs better off with Henry Candy's charge if it was run as a handicap. Thankfully for the sake of his connections, the handicapper didn't overreact and fire him up the ratings a bit, which I believe could be a potential mistake. The fact that he has previously rock-solid York form is another bonus, as he has run crackers on two of his three outings over C&D, including once this season when the ground probably wasn't fast enough, as well as the pace not collapsing sufficiently (winner made all). I think the one thing that could beat him is being stuck in stall 1 (of 20), as preferably he could do with being in 7 or 8, but at least there's plenty of low-drawn speed and those in the bottom half are fancied to be at an advantage, though that's guesswork as of now. Eddie Ahern being booked is eye-catching to a point and he's one of my favourites, especially when he's on board a trier! I suspect that connections will let rip in order to try and nab this £25k prize, his last outing being a perfect prep run for something bigger. He's certainly handicapped to play a part, 7lbs below his mark of this time last year and this C&D is the sort of place that'll bring out the best in him. The market is not really offering a whole lot of room for movement with his price, but I'm convinced that he's a major player and we should get involved despite the lack of obvious value. The usual stakes should do.

There's no doubting that Very Good Day was a massive disappointment when seen running at Glorious Goodwood earlier in the month, but Richard Hughes eased him right off once the pair were beaten on that occasion and that makes the distance he was beaten look a lot worse than it could have been. At least the Mick Channon trained 5-year-old didn't have to exert himself too much and shouldn't be feeling any after-effects just over two weeks later. The race wasn't ruin to suit him anyway and despite having run well at the track twice previously, it isn't really a place where he can be seen to best effect. For that reason, you're best to just strike a line through the run. On his penultimate start, under today's jockey Neil Callan (for the first time), he ran an absolute belter over C&D to win by just over 2-lengths, seeing out his race in the style of a horse with more to offer the game. I don't believe that the race was completely run to favour him either and he did remarkably well to win in the manner that he did. They should go a better gallop today and that is a sure-fire positive, as it was a lack of race-pace that contributed to his Goodwood failure. Returning to York will do no harm, given the fact that his only other run here was another cracker that saw him beaten half-a-length over 1m 4f, evidently a trip too short (though he's always more likely to get the required race-pace over that trip, and did). Overall, he has the profile of a horse who still has plenty more to offer over the staying trips and it isn't exactly a contest containing a plethora of attractively rated contenders. The form of his yard is sound as well and he holds a better chance than the odds suggest, though is not an obvious winner-in-waiting or anything like that. He could go well with some luck in-running and is worthy of a bet.

Yet another massively competitive race but Cool Macavity looks very underrated in the market and could prove capable of playing a part in this 17-runner contest. Charles Hills' 4-year-old has caught the eye on many an occasion this season and whilst he may not have the class of some of his rivals, it is at least reflected in the ratings and to say that 85 will be the ceiling of his ability would be very premature. He has only lined up to race on 11 occasions and despite not being the most straightforward at the best of times, has still conjured up a trio of successes, including handicaps off marks of 79 & 80. However, it is his runs in defeat that have caught my eye the most, especially last twice when finishing fourth at both Ascot and Doncaster on contrasting ground. In the former, he travelled superbly at a track that I don't believe would suit him completely and could have left that race victorious, though would have been very fortunate given that the second and third were luckless in-running (he avoided trouble by coming wide into the straight). At Doncaster he simply got going too late in a race where the pace-setter was given far too much rope and that resulted in a bunched finish, with our fellow beaten just a half-length into fourth. It was as good a run as he has ever produced though, seeing as the race wasn't exactly favouring the hold-up types and I can't understand why he's available at such a price today despite coming into this on the back of such a solid effort - though it may become evident after the race. This will almost certainly be run at a thorough gallop and that's going to help Hills' charge, who clearly stays well and needs such a tempo in order to relax into a rhythm, as he can take a grip when they're not going quick enough. It's his first visit to York but flat tracks definitely suit him and with the prospect of further improvement to come from him, he shouldn't be such a large price with lots in his favour. The market leaders look strong enough, but are too short to get involved with and it wouldn't be surprising to see one of the outsiders land the £16k spoils, hopefully this one.