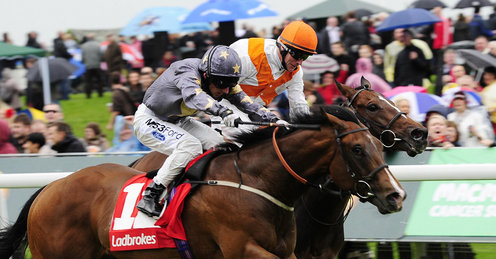 It's a pity that Doctor Parkes wasn't drawn towards the middle because that proved to be the place to be in the end and he ran so very well despite being isolated on the far side. That ultimately gave him no hope of getting involved, so the fact that he wasn't beaten far at all bodes well as to his current well-being and there is one of these handicaps in him before the end of the season, though he'll need his ground and a good draw. It's frustrating that he couldn't give best today but that was due to unforeseen circumstances and as it transpired, I called the race-pace all wrong, along with the track favouring those stands' side.

Very Good Day could have made it exactly that if he managed to get out in time, because he was stuck in behind horses when trying to come through with a run and being a dour stayer, needed to get in the clear a long time before he could. The way that he ran on into second place once getting that room suggested that he could have mowed down the winner, who wasn't exactly finding too much in front and this is yet another one who has got away from us. It's four seconds for the month now; 14/1, 20/1, 20/1 & 25/1. Sick.

The final selection, Cool Macavity, was the worst and never landed a blow. He got no luck in-running, but wouldn't have cut much ice in any regard having been too keen early on. The main issue, once again, was a lack of race-pace and you can completely overlook this run. He's eligible for much weaker contests and handles most ground, so he will be one to back again before the season is out. This was a bit too much.

Three selections today, all nice prices and hopefully one could poke its nose in front. Have a good day.

This is a lottery of a race and I rarely get involved in juvenile contests, but Annunciation looks just the type to excel over 6f on fast ground when tackling a track that suits his run-style and he's getting that here. One of the problems with him in his short career so far has been getting him to rein in his speed and that will be a lot easier to do in such a large field, as he'll get the opportunity to sit close to the speed rather than being the speed as has been the case last thrice. Two of those races were small-field events in which he had to lead but the other was the Group 2 Norfolk Stakes at Royal Ascot, in which he blasted off over the flying 5-furlongs and was never going to get home. Being the choice of Richard Hughes that day was very encouraging as to how highly regarded he is at home, with the other Hannon runner being second to the impressive Dawn Approach on his previous outing, but both ended up disappointing at Ascot anyway. It's interesting to see Hughes now jump ship again, to the horse that he deserted that day, but I believe that he has made the wrong choice, though may look hilariously incorrect after the event. Jimmy Fortune is an able deputy at the same time and has finally rediscovered winning ways after an age of riding losers. The two runs either side of the colts Royal meeting flop resulted in victory, firstly in a novices' race at Windsor (very impressive, though just a three-runner affair) and then in another one of those at Chester when last seen, at the end of June. He looked in trouble at one point, despite being sent off at odds-on, but was at his strongest in the closing stages and pulled out more when challenged, displaying a solid attitude in the process. The break since then will have done him the world of good, as he was on the go quite a lot during May and June, racing on no fewer than five occasions and that's not easy for a horse of his age. He is at least built to have an advantage over most juveniles and will hopefully return here as an even better performer, with the step up in trip being something that I anticipate him to love. Whether he'll love his sit in stall 18 is beyond me but I'm hoping that it's not too prohibitive, and it doesn't seem to be. The Hannon runners are always hard to discount in these big-field sales' contests and he should go quite well in this.

Navajo Chief has never run a bad race at York, with form figures reading; 3-4-1-5-1-0. The last figure there would make it look as if my statement is incorrect but that run, his most recent (six weeks ago), came in a similarly hot handicap but over 1m 2f on ground that his trainer William Jarvis described as "sticky", and I don't believe that he's able to give best over that trip anyway. He still managed to travel well throughout the prestigious race, the John Smith's Cup, despite having to overcome a terrible draw in 20 and also having to be positioned wider than ideal for the first few furlongs. It was simply a case that he didn't stay on the ground, as far as I'm concerned, and it's an effort that needs upgrading somewhat. His previous run was also at this track, back in June, on ground softer than ideal but he was victorious that day, proving to be as game as ever to score by a neck over 1m 1f when rallying under the Fallon drive to get back up nearing the finish. He and the useful runner-up, Area Fifty One, were a long way clear of the remainder and that horse scooted in by 4-lengths off a 5lb higher mark next time out, albeit at a completely different track on properly quick ground. There's no doubting that Alan Jarvis' charge faces a much tougher task now, as he's 6lbs higher in the weights but at least he has got Michael "Wexford" Murphy on board and he has got the most valuable 7lb claim in the country, making the horse look feasibly treated when it's taken into account. He also goes well when fresh, so the six week lay-off will do no harm and the Jarvis yard are in cracking form of late, having had 7 winners already this month (same total as April, May, June & July combined). Jarvis seems to get his horses to peak in this month and that was the case with Navajo Chief last year when he overcame a much longer lay-off to take this race off a mark of 103, with an excellent 3lb claimer on board, and there's no doubting that he will be primed to give his best once again. Whether he's going to find one or two that bit too well-handicapped is the main question, with no horse aged 5 or older taking it in the last ten running's (he's 5) but none of the younger horses appeal at the prices and I fail to see how this one is 14/1 given his ability to perform so well at the track. It'll take something like his best to win this off 105 (98 with the 7lb claim considered) but he's reported as being in "tremendous form" and should give it a really good shot if not forced to go off to quick, thus setting it up for the closers. The usual stakes will do again.

Not many horses have been as progressive as David O'Meara's Dutch Rose this season and her rapid improvement may not be finished as of yet, with her masterful trainer looking to have a bit more to work with if recent evidence is anything to go by. This 3-year-old filly comes here on the back of a very decent, running-on seventh of 16 at Glorious Goodwood, a race in which she got a few early bumps and had to overcome a modest draw. It proved to be an impossible task, with the track not seeming to totally suit her and it's an understandable performance in my opinion. The winner of the race has won again as well, off a 7lb higher mark, beating Trail Blaze by just under 2-lengths and O'Meara's filly had previously beaten that runner by 4.5-lengths, when she was 2lbs lower in the ratings, over today's C&D. The bare reading of that form isn't something to take too seriously, with many factors having to be taken into account but it does show just how well she did when landing a very truly-run apprentices race over this C&D last month, the race not looking half-bad at all. This is a different kettle of fish, but if anything it should be run to favour her and thus gives her the best chance possible of defying today's lofty rating of 86. Ladyship is beautifully bred and coming into the race on the back of a cracking performance over 6f at Ascot when beaten just a nose, but she has went up 6lbs in the weights and looks far too short in what will be an entirely different test when compared to her last outing. She may well have stacks in hand and win easily, but I'd rather let her do that at the current prices, which look based on stable prowess as much as anything that she has achieved on the racecourse to date. Dutch Rose is at least fairly priced and whilst she may not be as attractive on the book, she has solid form to her name and is better than her run last time out. Conditions won't bother her, the race will be run to suit and the yard are in good knick, so all looks poised for another big run from this improving animal. She'll have to be at her best, but at 12/1 I will happily take the chance.