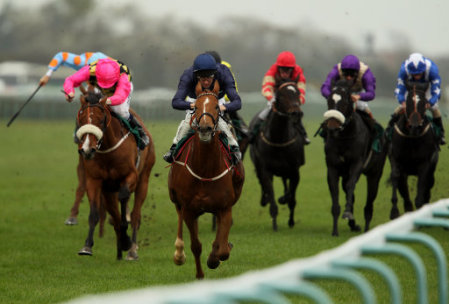 Saturday did not exactly go to plan, with Beacon Lodge being the first to run and he barely even did that, showing absolutely nothing. Usually I find it very easy to excuse a horse for a below-par effort but it's a lot tougher to do that here and he just looks gone at the game since joining up with Dandy Nicholls. No doubt that he'll go on to win soon now that I've said that but I certainly won't be advising anyone to back him until he shows a bit of the old spark. This was an atrocious run and in hindsight, a terrible selection from me.

Monshak was very well-supported in the market but she planted herself in the stalls and would not come out. The race panned out perfectly and it's a massive pity that she showed a bad attitude on this occasion.

The last horse to run was Ballydoyle's Harrison's Cave, but he needs a good gallop to chase after and he didn't get anything of the sort. That led to him under-performing drastically and we're better off ignoring the run. He's a far better horse than this and is one for the notebook. There's a nice handicap in him, for sure.

Two selections for today but it's hard to be confident as we won't have a proper grip on what the ground is like until after the first race. As long as it's genuinely good ground or faster, both of these should be up to running their races. However, if it's any worse than good then I suspect that they'll struggle to do so. There doesn't seem to be much rain expected though, so here's hoping for the best. Have a good one folks.

I won't be blowing anyone's mind by saying that I fancy Lunar Deity to run a big race here, as he's a rather short price by my usual standards but he has a seriously good chance if all is well and is a hint of value at the current odds. Eve Johnson Houghton's 3-year-old has stood a fair amount of racing over the past year and whilst he hasn't really gone on from his highly impressive 5-length maiden win, he has got pieces of form that leave him looking well-handicapped off a mark of 73. The fact that he has previous course form bodes well also and even more importantly, that was a cracking effort. It came in a Listed race at the start of June, in which he was the 25/1 outsider of 6. However, he outran both his price-tag and handicap mark to finish in fourth place, beaten by around 4-lengths. The winner on that day was Producer, who has since won a Group 3 in impressive fashion and it rates as solid course form. It also came over 7f and I believe that Johnson's charge is a better 6f performer, especially when there's likely to be a rapid gallop on from the offset. There should be one here, with a few speedy forward-going types due to line up and that will be a certain help to his chances. I am worried that he could bounce, as this comes just five days since he ran really well at Lingfield to finish in third when being unfavoured by the run of the race. Sometimes it's worth taking a chance and with Jimmy Fortune on board (riding winners again lately; positive booking too), the yard in decent knick and plenty being in favour of the horse, we'll risk it here. The usual stakes will do and whilst he's hardly a wonderful price, he is a winner-in-waiting and should have a say now dropping back a class. Heyward Girl is one who I wanted to keep on side but her price has been ruined overnight and isn't worth bothering with now, unfortunately. She may also be pressured into going off much too quick in front.

There's a decent chance that this will prove too much of a speed test for Albany Rose but the pace-setters are likely to go off like scalded cats and hopefully Rae Guest's filly will produce a power-packed finishing effort once again. The 4-year-old comes here on the back of a couple of months off the track, last seen in a Listed race at Ayr. She was below-par that day, finishing 8-lengths behind the principles but the ground wasn't quick enough for her and it has to go down as a forgiveable effort. Previous to that run, on her only other start this year, she was a fast-finishing fifth of 18 in a very decent York handicap, ending up just over a length behind the in-form winner. That was on the back of an even longer lay-off and needs upgrading, so she could well be a nicely treated animal off the same mark here (87). Connections have high hopes for her as well and she even had an entry in the Nunthorpe, though luckily they did not go down that route as she's clearly not up to that level and it could end up ruining the rest of her season. Rain could be very detrimental to her chance here, but hopefully there won't be too much. Ted Durcan being on board is not something that I'd consider to be a positive because, despite being a very nice man, he is not a very good pilot. However, he has at least guided this filly to success on three previous outings and knows how she needs to be ridden. He also has 7 wins and 4 seconds from just 28 rides on the turf for this yard and is at least an indication that they're trying to win. Overall, her chances could be ruined by many aspects but the odds are on the generous side in my opinion, and she's worthy of support in a race lacking any obviously progressive types. Long Awaited would be the obvious shout if the rain comes and the blinkers still work.