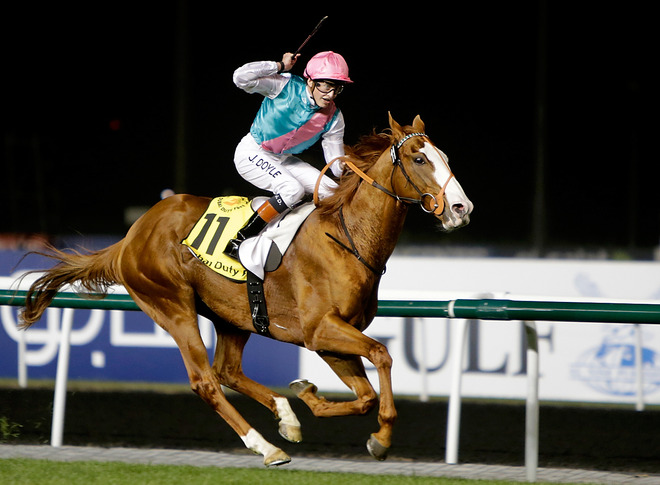 No joy on Wednesday. Bunce was encouragingly strong in the market, almost halving in price throughout the day but he failed to land a blow, seeming to go through the race at the exact same speed. The draw was a hindrance to him (though the winner came from one higher, albeit due to an excellent ride) and he wasn't positioned bang on the speed, as I had hoped and as you needed to be given how the course was riding. I know that I say it frequently but don't judge him too harshly on this run as he never had a chance due to how it all panned out. Hopefully the handicapper will be kind to him as well. He'll be winning before too long, I'm quite certain of that. Possibly at a different type of track - he didn't seem to handle Catterick.

Gaul Wood ran as well as he ever has to finish third, just losing out on the runner-up spot in the closing stages. I thought that there'd be a decent pace on but the Dunlop filly went off like a scalded cat and that didn't help matters for our fellow, who just couldn't make inroads quick enough. The winner evidently had an ocean in hand given how the race panned out but it may have been different had the pace been more reasonable, though we'll never know that now. It was a career-best from Dascombe's charge and he was just a bit unfortunate on the day. He's still unexposed and talented, so is worth following on quick ground.

Very modest stuff considering it's a Friday and the only selection requires a big leap of faith, given that he bombed on two of his three career runs. However, all looks set for a big run and hopefully that'll occur. GL.

Should the below end up defeated, August will finish with a profit of +10.50pts (20% ROI). That's just a drop in the ocean in comparison to what I have to make up for from June and July but we have been a bit unfortunate not to have done even better. 11/1, 14/1, 20/1, 20/1 & 25/1 are the prices of the five seconds that we've had and even if two of them had have managed to win, things would look a lot rosier. Added to that is 11/1 shot Zumbi who was desperately unlucky not to win. If luck was on our side, we'd be a happy bunch, celebrating a really good month but it wasn't to be. At least there were five winners in the second half and there's plenty to work with. The good times will roll again, I'm quite sure of that and if everyone's able to bide their time (it's tough, I understand), we'll be back in the good books before too long, for sure.

3-year-old's have a fine record in this race, landing four of the last five running's and Newnton Lodge can enhance that if he's ready to roll. Roger Charlton's charge is completely unexposed, having had just a trio of outings to date and only one of those came this year. Last year, he was really well-backed on his debut, which came at today's track but over a furlong shorter (7f). He travelled nicely through the race, strode into contention impressively and then powered home in the style of a horse who would make up into a really good performer but, sadly for connections, that has not materialised as of yet. His only other juvenile run saw him bomb out at Leicester, with a hood on for the first time and it's a rather mystifying performance that I, nor his trainer, can understand. It's probably best to just ignore it completely. He was put away then and reappeared at the beginning of this season, in April, but again disappointed. However, that was a very good handicap for 3-year-old's and was run on quite desperate ground, in which it proved impossible to get involved from off the pace and he was held up in rear. Added to that was the fact that he was much too keen for his own good and for those reasons, was never going to run his race. He has had four months off, has been gelded (should be a big help), returns on much better ground and has the hood back on, on what is his first attempt over a mile (bred to get further with ease). Coming back to this track is a certain help and based on that decent maiden win, he's potentially well-handicapped off a mark of 81. There's a fair chance that he may need the outing but at least he has prior of going well fresh (albeit on debut) and is worth the risk at the prices. First Post also interested me again, given his fine form over this track but he has first-time blinkers on and is a lunatic, so God knows how he'll react to them on course. Overall, I think that the Roger Charlton gelding has a lot more to give once he comes to his own and will hopefully do so here. A solid gallop would help to no end and is possible as well. The usual stakes shall suffice.