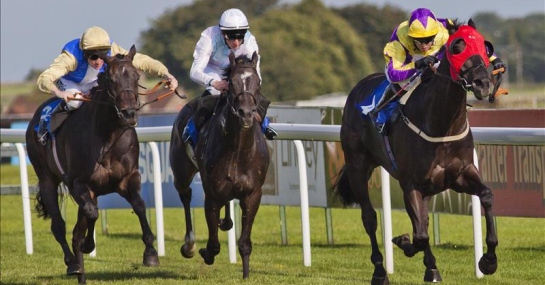 Usually the day after I have a selection who goes very close, the ones I've selected run like donkeys and Thursday was no different. Sadly, fears over Pilgrims Rest not handling the tricky track came to fruition but he didn't get a race run to suit in any regard and wasn't given a hard time of it once beaten. Racing keenly throughout didn't give him any chance of getting home after it turned into a sprint and he just wasn't good enough to land a blow on the day. There'll be other better days for him, back on a far more galloping track.

Red Art got hampered on the rails when trying to make up some ground after the turn but he wasn't going anywhere too quickly, under a stupid ride, and it mattered not. That is the last time that I will put up a horse ridden by Michael Hills. He's certainly past his sell-by and looks so weak, along with being tactically inept.

Another day where there's very few races in which I can advise anything at all, just one in fact. I was really looking forward to this meeting, but it has been a non-jigger in terms of viable betting opportunities. Let's hope that the one we have will do the business, but it's in a very competitive race and we'll need plenty of good fortune, which has been non-existent lately. The signs are a lot better though and the winners will arrive soon, fairly confident of that. We just need to be patient and wait for the right bets. All the best today.

This is a crazily competitive race, in which we're going to need a lot of luck in order to land on the winner. At the same time, I've got plenty of doubts about the vast majority of the field and it's not too difficult for me to know who I want to side with. That horse is Albaqaa, who despite being a 7-year-old, shapes as good as ever and can go very close if getting luck in-running, as is his need given his dramatic hold-up style. A lot of encouragement can be taken from his last two outings, where he was unlucky during the run in each before staying on nicely. The first of those was in the Royal Hunt Cup at Ascot and in my opinion, he is not a true straight track performer (5 of 6 career wins have come on a turning track). He travelled quite well in that prestigious race, but was caught for room on a few occasions and never had a chance to hit his full stride, only running on once the bird had flown. A month ago, he was behind Trade Commissioner, ante-post favourite for this contest, in a valuable Sandown handicap. Again, PJ O'Gorman's charge got no luck in-running, but I thought that he was ridden with an eye on future engagements and being a former really impressive course winner - over a furlong further at this meeting last year, when rated 87 - they may have had this race in mind for some time. He was certainly ridden to give that impression, seen travelling well in rear with nowhere to go before running on when it was all too late - beaten just 2.5-lengths. What he'll do here is completely dependant on race-pace and if it's not run at an overly quick tempo, then I can't see him swooping quickly enough to leave victorious. However, if my judgement is correct, it should be a truly run race and a pace collapse looks likely, which is exactly what we need to see happening. Kieran O'Neill rides, gets on very well with the horse and was the man on board when he won on his only previous visit to the course in a handicap (made debut here also). This is the sort of track that Albaqaa can show his best at and if given a chance by some intelligent race-riding, he could justify the medium sized stakes that I think should be played. Hopefully it'll be run to suit and give us what would be a deserved, overdue win.