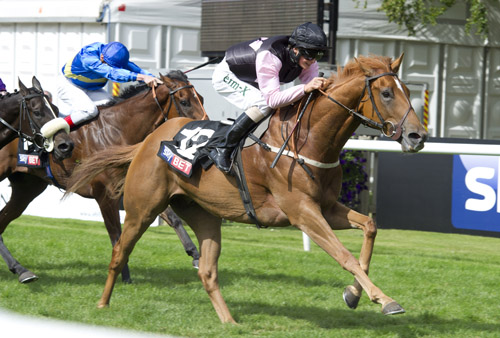 More disappointment as Grand Stitch ran no race at all, which is hardly surprising giving how easy he was in the market. I would have never expected that he'd be outpaced so easily, as he's all speed and just didn't show anything at all in this race. There'll be other days for him I'd imagine and some games must have been played given how poor this performance was. He was beaten after the first few yards - awful. February is just getting better and better! We've lost Newbury's card for today too. Not good at all.

-2.00pts on the day. Form since last winner; U-4-6-7-4-2-5-2-6-4-8. Gutting, but there are some positives. One of the most important ones in this losing run is that I'm finding selections in races where the favs are perceived to be underpriced and don't end up winning, which is half the battle. Very frustrating to back loser after loser, but the winners always come eventually - plus I'm streaky as hell. In the short-term, it's fairly sickening but these are the joys of playing the value game - we just have to grin and bear it.

Plenty of racing for Saturday but in terms of finding some worthwhile selections, it's pretty impossible. I've found one that could run well in a 5f sprint at Lingfield but the words "sprint" and "Lingfield" can make for some crazy races, so it's not one to get carried away with. Hopefully he'll go well and preferably win! Given how the last 10-12 days have gone, nothing would surprise me but surely we're due some good luck at some point very soon. Have a good day folks and best of luck with whatever you're backing.

Taajub has never been one bit short of speed and the drop to the minimum trip, in a race that should be run at a furious gallop, should play right into his hands. Whether Peter Crate's lively 5-year-old is capable of handling this trip at this sharp track is a slight worry but I'm hopeful that the booking of Ian Mongan for the first time will lead to connections riding the horse closer to the pace. Ian Mongan is an exceptional, uncomplicated jockey who does the simple things well and he should prove to be an asset to this animal, because he's not the easiest to win with, as his 1-16 record suggests.

Last time out, over 6f at Kempton, Taajub was too keen for his own good in a race that suited those up towards the head off affairs. He did the best of those held up towards the rear and it's an effort that confirms that he's still in quite good form. It's also a positive that Crate's charge was so strong in the market, as has been the case on his last trio of outings and I'm sure that his shrewd connections will be expecting him to take advantage of his attractive handicap rating before too long.

Being dropped 2lbs by the handicapper for his most recent outing is yet another bonus and he's so well-handicapped at the moment that 6/1 is just too big in a race of this nature. So many of the opposition are speedy types who like to make the running and if this isn't run at a rapid gallop - even more rapid that is usual over this trip - I will be shocked. Taajub should thrive on racing in behind this sort of pace and I expect that his finishing effort will be improved massively, as he has looked one-paced on occasions before, which is down to a lack of race-pace forcing him out of his comfort zone. Small/medium win stakes will do the job again and I'd rate him as being around the 4/1 mark if I had to price up the book. There are always plenty of risks in sprint handicaps, not least at Lingfield, so anything could happen here. The market should guide us though and hopefully it'll be positive, as Crate seems to like a punt.