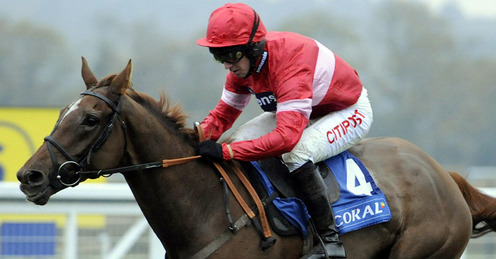 Somehow, and I'm still now sure how, Zarkandar emerged victorious in the Betfair Hurdle at Newbury, showing an exceptionally willing attitude to get involved from an awkward position. The contest was run completely different to how I had hoped and to how the horse would have wanted, so I was cursing my luck pretty much from the off as the field was crawling along. Ruby managed to get a fine tune out of him in the home straight though and he motored home to score by just over a length. The bare figures would suggest that this wasn't the performance of an obvious Champion Hurdle contender but he'll thrive on a fast pace around Cheltenham and I wouldn't be surprised to see him give Hurricane Fly a scare should they meet. I won't be backing him I'd say but it's nice to have a winner, even though it was quite fortuitous.

Minella Theatre was never involved over at Sandown but given the fact that he wasn't full of friends in the market, I doubt that connections will be overly surprised. He didn't show a whole lot having been held up in a race where being handy was an advantage and I think he's one for again at some stage. It was a very disappointing run but there will be plenty of that and enough excuses are there to still keep him on side.

Made the silly mistake of going to play in a game of indoor football, so I'm feeling slightly worse than yesterday! Still keeping the write-ups brief for the time being but hopefully it will be a good omen and sometimes less is more! Have a good day folks and hopefully one of our two will oblige. Thought that I'd have a couple more than that but a few of the races are complete headscratchers and I'm still scratching.

In all likelihood, this looks like a two horse race between Silviniaco Conti and Bobs Worth, with the former being a horse that I've got plenty of faith in and he should take all of the beating here. Paul Nicholls' 6-year-old has taken to the chasing game exceptionally well since starting out in this code earlier in the season and it seems certain that he'll develop into a high-class staying chaser in time. The same could be said for the Henderson runner but I just don't think that he's that good and has a few lengths to make up on my selection from their meeting in the Feltham on Boxing Day at Kempton. The stiffer track that the pair encounter here will suit both but it's debatable as to whether Bobs Worth will get a race run to suit and I'm not convinced that he has the pace to be fully effective in races that aren't run to suit him, especially when tackling a rival who is so talented. Silviniaco Conti is hardly an amazing price at 13/8 and not one that I'd usually get involved with but I'm sure that he only has one rival to beat here and is overpriced to do it. Medium win stakes will do the job and hopefully he'll justify my decision to back him.

This is quite a more competitive race than the previous one but Pearlysteps looks overpriced to get involved and should run a big race if he isn't inconvenienced by the quicker ground that he encounters today. Henry Daly's 9-year-old is still unexposed as a chaser having only lined out on 7 occasions and although his rating of 143 is fairly lofty, there could be a bit more to come yet. On his pair of outings this year, he should have finished 2nd on both occasions but he capsized at the last on his seasonal debut when probably held at the time but both runs suggest that there's a nice handicap in him this season and this one should be run to suit him at least. The stiffer track will play to his strengths and the recent form of the Daly yard is very encouraging. Jake Greenall, who knows the horse well, hops back on board having missed out on the ride last time out and he's taking another 5lbs off the horses back, which will surely come in handy. 7/1 looks a bit big to me and small/medium win stakes will do the job in a tricky race.