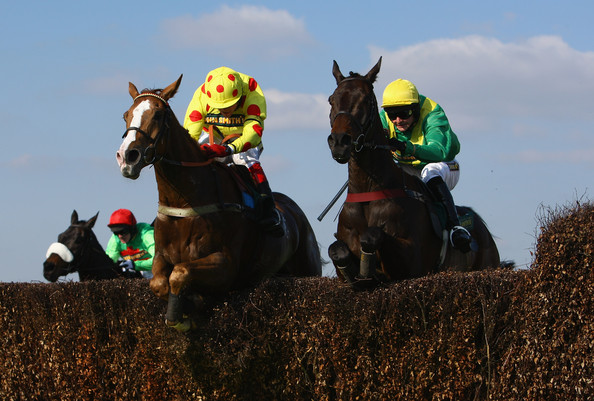 Peedeeque was fairly easy to back at Wetherby yesterday and that's not what you want to see with a David O'Meara trained animal. He travelled well as he so often does and jumped a lot better than usual, bar the odd silly mistake, but he raced very wide throughout and that hindered his chances of getting the longer trip on the more testing ground. I'd say it went exactly to plan to be honest and there'll be other days for this animal, as his current rating isn't the ceiling of his ability. Into the tracker he goes and I intend to be on board again soon, when he gets everything to suit. The market will dictate this fellow chances and it didn't speak favourably this time. Disappointing, but it was an encouraging run when all things are considered.

3 selections on what is a busier day than has been the case of late. Nothing particularly strong though, so who knows what'll end up happening and a couple of them are big-ish prices. Hopefully one could oblige and best of luck with whatever you're backing. As ever, have a very good one folks.

Plenty of the runners in this veterans handicap chase look underpriced in the market to me and the only one that is remotely interesting at his current odds is Mumbles Head, a horse who comes with plenty of risk even when you discount the fact that he's trained by the notoriously confusing Peter Bowen. Quite what intention the trainer has here is completely beyond me but with £10,000 being a fairly nice pot for the winner of this race, I'm hopeful that it'll be all systems go. This season, Bowen's 11-year-old gelding hasn't exactly set the world alight as he pulled-up on his reappearance at Aintree and unseated his rider at fence number eight in the Welsh National at Chepstow. The latter was a race in which he showed signs of his previous ability (has had problems since last running a good race) and despite his age, he isn't one bit exposed over fences just yet. I think that the return to 3-miles will suit, as will the smaller field in this weaker contest and it'll be very interesting to see how the market speaks here. 14/1 looks too big to me and with Tom O'Brien booked to ride this fellow for the first time in an age, a good run could be in the offing. Hopefully that's the case and as is usually the way nowadays, small/medium stakes will be played.

The chances of landing on the winner in this ultra-competitive handicap hurdle looks to be slim-to-none but there's a hint of value in the current price of Patsy Finnegan if Alan King's charge is "on the job" so to speak. It's rather impossible to tell at times but this 10-year-old is another that's unexposed despite his age and looks to have plenty in his favour. The ground coming up good should be a plus anyway and given how well he ran off a 2lb lower mark in a steadily run affair at Taunton last time out, I'm sure that he's handicapped to win a race, even one as tricky as this. The likely strong pace should play into his hands assuming his jumping holds up and Doncaster is a much more suitable track than the speed-demanding Taunton. Recent yard form is encouraging too, as King couldn't have his animals in better knick and this one certainly showed that he's returning to something like his best when staying on quite well when last seen a month ago. Regular partner Robert Thornton hopping back on board is no bad thing either, as he's the man who guided this animal to his last success, which came off 1lb lower in March of '09. Having run over hurdles on just 7 occasions, not all of which were when getting optimum conditions, it's very likely that 122 isn't a mark that's beyond him and I think he can go well in this race before heading back over fences, which seems to be the plan. 16/1 looks huge to me and although I may be proven exceptionally wrong, he's worthy of a small/medium bet at the price. Hopefully he'll get involved.

Island Legend is surely due to keep his head in-front at some stage soon but his current odds of 5/2 aren't appealing to me at all and I'd rather go in search of value elsewhere. With a strong pace being very likely, the often keen-going speed merchants who like to be waited with should come into the equation with quite a decent chance of glory and Estonia fits the profile that I'm after. This 5-year-old mare will have to produce a career-best run in order to win this race but her strong-travelling ways will always give her a chance of defying this sort of rating when the race is run to suit and I have to be hopeful that this one will be. Michael Squance's charge has a few lengths to make up on some of this field for her run over C&D last time out, a race in which she held every chance before finding little for pressure, possibly due to over-racing and having to make up too much ground too early after missing the kick at the beginning. Being drawn out wide on that occasion was no help either and today's draw has been much kinder, as she's allotted a sit in stall 3 and looks sure to get an ideal racing position if breaking away on terms with the field. Luke Morris being on board again is another plus given how well he's riding of late and there's not many better around this track. Hopefully he'll be able to get the best out of this speedy mare and 7/1 about the pair gaining victory is a couple of points too big. Small/medium win stakes will do the job once again.