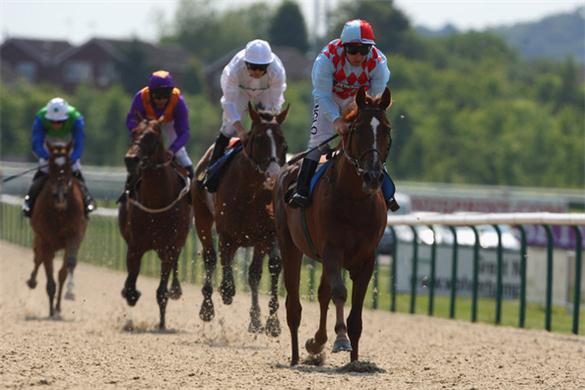 Saturday couldn't have went much better, with Baby Mix running out an impressive victor in his Grade 2 contest at Kempton and it firmly puts him in the frame for the Triumph Hurdle at Cheltenham next month. He looked a rejuvenated animal this time around and jumped very well in the main, fulfilling the promise that he had shown when winning easily on his British debut. On the basis of this run alone, I'd say that Cheltenham and the race he's entered in will help to see him in a much better light and 7/1 may not be a bad price at all. I'm not backing anything ante-post just yet (possibly not at all) but he'll be coming into the equation for sure. Regardless, it was nice to get the favourite turned over and even nicer to have a winner!

Nacarat was my only other selection and he went on to give Tom George a big-race double by winning again at the track that he loves - this time by 11-lengths. It was a real rollercoaster of a performance, as I thought he'd go on to sluice in when he took up the running going much better than them all but then the eventual second took over and looked likely to scoot in. However, that one didn't jump well in the closing stages and didn't stay the trip in any regard, so my selection got back in charge and ran out an impressive and deserved winner. He's off to Aintree next it seems and if in the same form, should be considered.

Just the one selection for today and he's no sure-thing! He's overpriced though and should give us a good run for our money, so he's worth taking a chance on. Hopefully he'll go well and have a good one.

There should be absolutely no hanging about in this contest over the flying 5-furlongs and although it looks pretty much impossible to solve, I'm going to have a shot anyway! The one I want to be with at the prices is Richard Guest's 5-year-old, Dancing Freddy, a horse who should be near to the pace, which obviously makes him a risky proposition if they go too hard from the off. However, it was a quite similar scenario on his penultimate outing - over C&D - in which he came up against Island Legend, who has to be one of the quickest animals in training. My selection for today's race chased that one throughout and looked like the only one who could go with him as they turned for home, but he couldn't get to him and eventually finished 3rd, half-a-length behind the duo in-front. It goes down as a very solid performance in my book and after running an understandably modest race at Southwell since, the handicapper now has him rated 2lbs below his penultimate run and he's on his last winning mark too. Given how strong he was in the market before the off over this C&D last time, connections must be expecting the horse to strike before too long. William Carson, who was on board for the first time on that occasion, hops back on board having missed out on the ride last time out and it could be significant that he's on. Carson usually does well when booked for this yard and rides just two of their 9 runners today, with the other being a proverbial no-hoper. It may be significant, it may not but Dancing Freddy is certainly overpriced to be victorious here and I think he's worth taking a small/medium sized punt on. It's a very tough heat, one that I'd usually pass over but he'll be back into the winners enclosure before too long and hopefully it'll be today. The market will guide our chances and if it is positive, we will have every reason to get excited. If not, we won't!