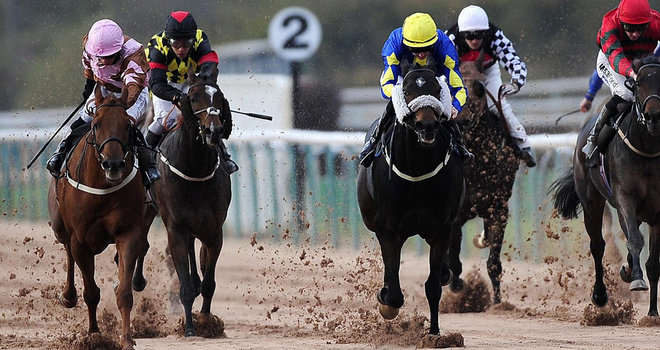 February got off to a poor start. King Of Windsor was very, very strong in the market (9/2 into 5/2) on what was his first outing for the Keith Dalgleish yard but he was never given a chance to get involved in the finish by the usually brilliant Jim Crowley. The race just didn't pan out to favour him unfortunately but it was a run that suggests he'll be winning again soon and I intend to be on, depending on whether there'll be a sufficient pace for him to run at and only if he's a decent price. This performance was obviously modest but that was due to some horrific waiting tactics being employed, nothing more. Disappointing.

Legal Legacy was fancied to go well by his trainer and I suppose he did, as he was staying on well into 4th place and just didn't really get the run of the race. A few things went against him mid-run and when asked for his effort, he didn't look to keen to help his jockey and kept lugging in behind his other rivals. I don't think he has given his true running here, despite the performance not being too bad, and I think he'll be up to going a lot closer in the not too distant future. Let's just hope that he's a nice price.

One selection for today after many hours going through the most tedious of races! This one is as dodgy as they come (for various reasons, plus it's at Southwell!) but one day it'll all click and I'm hoping that it will be today. Fingers crossed that'll be the case and best of luck if you play folks. Have a good day.

There's every chance that Shawkantango could make me look like a massive fool here given how risky it is backing hold-up horses over the straight 5f course at Southwell but this race looks likely to be run at a rapid gallop and I'm just praying that there'll be no tailwind aiding the front-runners. If there's not, there's every chance that the pacesetters will cut their throats at the head of affairs and the fast finishers could be on the scene to pick up the pieces. Derek Shaw's 5-year-old gelding is the only one that I think is capable of doing that given his usual run style and if he could just show a bit more exuberance in the earlier part of his race (which he hasn't been doing of late), C&D win number 5 could be in the offing.

Shawkantango won 4 C&D contests on the bounce last year (had a couple of runs elsewhere before the last of those), landing the first off a mark of 48 before scoring off 52, 58 & 64, the latter with Dale Swift on board (rides today). With claims taken into account, the horse is effectively still 1lb higher than the last of those successes but that came at a higher level that today's contest and he won it so comfortably that I wouldn't envisage his rating being the issue. He just needs a solid gallop to run at in order to be in with a chance of giving his best and unless I'm very wrong, he'll get exactly that today.

The recent form of Shawkantango is rather deceptive and I feel he's running better than the results would imply. His latest outing at Wolverhampton wasn't great (5f there doesn't suit) but previous to that he ran a cracker at Kempton (over 6f) when given somewhat of a tender ride from Joe Fanning. Derek Shaw's charge actually travelled well that day and if he's in a similar mood today, now dropped back to 5f at his favourite course, one would have to expect a big run given how well things should go for him in the run.

Shawkantango is also meeting some rather exposed animals here and although some are well-in on previous exertions, I don't think that they're overly good. This fellow isn't great either but he shapes as if he's coming right back towards something like his best and he's back in a C6 contest at this track for the first time in a long time. 8/1 looks very generous to me - I'd nearly go as far to say that he shouldn't be much bigger than 3/1, which is the part that may come back to bite me. Regardless, he's a good value bet at this price and worthy of medium sized win stakes. If he's on the ball and able to go the pace, I'm sure that he'll run a big race. If he's not, I'm afraid that it'll be an unfavourable result but that's life, and racing!