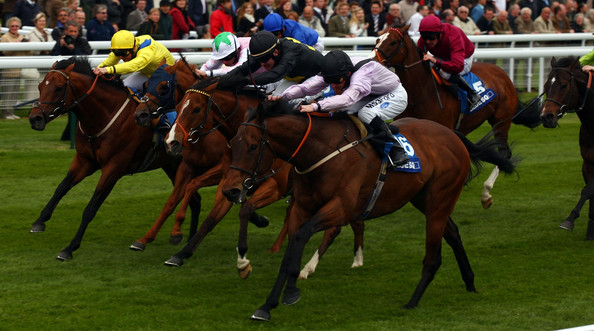 As feared, Lockantanks didn't get a good pace to run after and was never really positioned close enough in order to be suited to how the race panned out. He still ran a cracker to finish 2nd, beaten just a length, and I can have little complaints. It's quite frustrating at the moment, with my last two 3 point selections finishing in the runners-up spot and hopefully one will finish a place ahead at some stage very soon.

This one ran a great race but unfortunately, he just wasn't good enough on the day. The result is made even more annoying by the fact that we were beaten by a horse trained by my favourite trainer, ridden by one of my favourite jockeys and one that I've selected on numerous occasions - without success of course. What a great game this is! Plenty of heartbreak to be endured, but we'll win in the long run.

-3.00pts on the day. Some Saturday soon, the winners will flow... I hope. Certainly due a good one.

Sunday's selections didn't get the opportunity to strut their stuff unfortunately as Kempton was called off and I'll be keeping them in mind for again - plus they won't be posted in the open area of the site. Both have gone into the notebook and it'll be interesting to see where they head next.

Hopefully racing goes ahead at Wolverhampton today and if it does, I feel that I've found a 20/1 shot that could well outrun her price-tag. She's one of my traditionally risky value selections but a big run could be on the cards if things pan out as expected and if connections have her readied on the back of a short break. Hopefully she'll go well and best of luck if you play along. A winner would be very welcomed!

There seems to be an ocean of pace on here, which isn't exactly surprising in a 5f sprint but I think that you need a certain type of horse to win a race run like this around Wolverhampton and many of this field don't tempt me. As a result, Crimson Queen is the most interesting runner in my opinion and she looks quite overpriced to get involved at current odds of 20/1 - one firm only offers 8's, which could be correct. Roy Brotherton's 5-year-old mare doesn't exactly have great recent form on paper but a mark of 60 in a race of this nature doesn't look impossible to overcome if she gets some breaks in-running and it's quite interesting that Paul Hanagan hops on board for the first time. He's a very rare booking for this yard and only had one ride for them last year - which was backed from 14's into 17/2 on-course, but ran poorly.

Crimson Queen was sent off as a 50/1 shot last time out over this C&D but couldn't get involved in a race that suited those on the pace. Regardless, she ran on quite well in the home straight (from the rear) and the first-time blinkers that were reached for (on again) seemed to help her return to something like her old self, as it's an effort that can be marked up a fair bit. The handicapper has also relented, easing her by a further 2lbs for that run and she's now taking what is effectively a drop in grade. Actually, the last time that she ran in a 0-60 ended in a fairly impressive victory over 5-furlongs at Nottingham in a rapidly run race and she's just 3lbs higher in the handicap at the moment, which is workable when they'll go off hard.

One of my concerns is that Crimson Queen hasn't lined up to race for about 6-weeks and she could well be too fresh in the headgear on the back of that break. However, on the plus side, she has run well on the back of longer breaks in the past and it could well turn out to be a positive, although that's guesswork. The Brotherton yard don't have too many runners so it's hard to gauge their form but the booking of the in-form Paul Hanagan certainly catches the eye and hopefully it's a signal of intent. The opposition are all modest, infrequent winners and I don't think that this race will take a whole lot of winning, but the question has to be whether she's good enough to win around here at the moment (the market will tell us). I haven't a clue but she is a 20/1 shot and worth taking a small chance on at the price. Being drawn in stall 3 is a good thing too and hopefully she can bounce out, track the solid pace and saunter home after they take the final turn. That's wishful thinking but she's capable if readied to give best and looks very underestimated here.