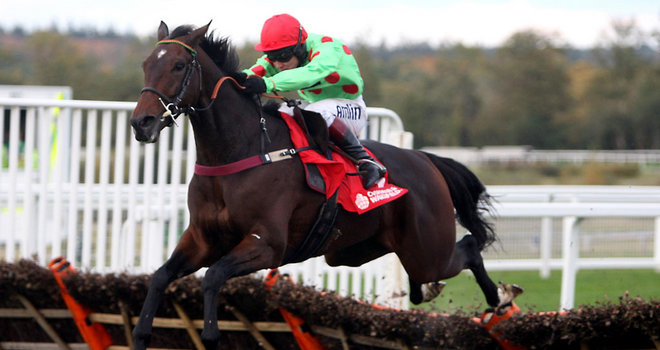 No luck on Monday with Katmai River failing to do the business. Previous worries about him breaking away slowly didn't come to fruition but unfortunately, he couldn't hold a good position in the early stages and ended up being held up towards the rear. That just isn't ideal for this animal at all and he burned up too much energy to get himself into a position to challenge over a furlong from home. I thought he looked quite threatening at one stage but he tired out of it and eventually came home in 6th place - beaten just 3-lengths.

Connections must have had a few pound on at the course as he was solid in the market having been backed from 10's into 6's just before the off. I'm quite sure that they'll be expecting a victory from him before too long and he certainly shapes as if he's running himself into form - so he's one for again. To make matters worse, the race was won by Lastkingofscotland - a horse who I selected last time out and said that he'd be winning before too long. It's just a pity that I thought that win would come around his beloved Lingfield. Unfortunately, Conor Dore is a tricky man to predict and didn't want the money down previously - he did on Monday. Oh the joys of Horse Racing!

Just one selection today. Was interested in a couple at Kempton but it looks quite tough to make head nor tail of the races there and the smart thing might be to just avoid them altogether. Today's one is a risky proposition for various reasons but he is a 10/1 shot and should outrun those odds if a few things pan out for him mid-race. Hopefully it will and best of luck if you play.

Only 6 runners are set to go to post for this contest and it looks quite tough to confidently rule out any of them. It's hard to see there being much of a gallop in these testing conditions and that could well do for the Nigel Twiston-Davies trained Rockabilly - a horse who shapes as if being a dour stayer. He's currently the favourite at odds of 13/8 and although he could win, and is potentially well-handicapped off 110, I couldn't for one second think that he's a viable bet at the price. There's no doubting that he has talent and his recent form is solid, but he's just slow and potentially vulnerable. This will be his first run over fences in which he will be going left-handed and who knows how that will suit. The easier track should also prove to be against him and as far as I'm concerned, he should be avoided at the price.

Midnight Tuesday is a recent David Pipe recruit and also looks potentially well-treated on the back of his debut run for his new stable. However, based on his showing over 2m 3.5f at Exeter last time out, I'd step him back to 2m quicker than I'd step him up to 3m - connections do the latter here. It's a trip that's well within his range but how he'll enjoy it with a big weight on his back on very testing ground makes 7/4 a risk that's not worth taking. I'd also be very wary of backing a Pipe horse with this sort of profile and he could well be one for another day. There's no doubting that this horse has plenty of improvement in him but should be taken on today, even though he could be a winner-in-waiting off his current rating.

The one that I'm most interested in at the prices is Federstar, a horse who badly needs to improve in the jumping department but he's one who has changed stables since his last run in May and that could have a positive effect. Martin Keighley is now the man who will attempt to get this 10-year-old to win over fences for the first time and seeing as he's now a 113-rated animal, that doesn't look like an impossible task. Quite how forward he'll be on what is his first run in a long time is anyone's guess but I'm sure that he's capable of running a big race on ground that he handles easily. I also think that the race will be run ideally to suit and Ffos Las wouldn't be the stiffest of jumping tests that a horse could face, which is another plus.

Federstar was a useful hurdler, rated 132 after a very easy 11-length win in a modest enough handicap hurdle in which he lined up off a mark of 120 when in search of a hat-trick back in 2010. He was actually expected to make up into an even better chaser but that obviously hasn't materialized. Regardless, he's very well-treated off a mark of 113 here in what is not the best of races and if connections have him readied to go well, I suspect that there's every chance of him doing that. When he jumps correctly, he's not half-bad at all but he's prone to getting in too close to his fences and one would hope that his new trainer will have helped him to improve in that department. It's certainly something that's needed but he shouldn't come under an excessive amount of pressure here until they set down to fight out the finish and that'll help if he's still upright at the time.

The Martin Keighley yard being in very good form is also encouraging and I'd be hopeful that they come here with a decent chance of upsetting the market leaders. 10/1 is a big price about this fellow in such a contest and small/medium win stakes will do. Anything down to 13/2-7/1 makes him worthy of support and it'll be interesting to see how the market goes, as I'm sure that it'll tell us what chance we have of collecting here. If his jumping holds up, he should run a nice race but there's always a chance that it won't and this is certainly a selection that carries more risk than most. Regardless, let's hope for the best and fingers crossed that he could oblige by landing the spoils.