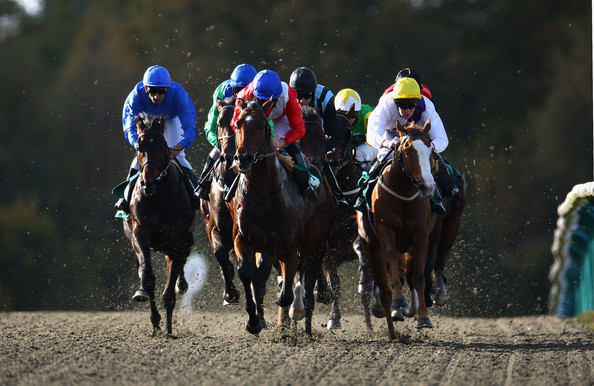 Piceno ran a cracker when well-backed at Southwell yesterday but that looked to be a sure thing once his main opposition in the pace department was pulled out of the race; there was a 20p R4 but we were still sitting on odds of just less than 5/1 about a horse who went off at 13/8. Unfortunately, he could only manage to come home in 2nd place (beaten half-a-length) but he gave it his best and probably would have won if Powell was more forceful on him from the off (they also broke a bit slowly from the stalls), as he set a modest tempo on a horse who stays further than the trip - which proved to be against him on the day and favoured the eventual winner. I can't have any complaints though, he ran well.

Two selections for today, one of which is an exceptionally risky betting proposition and the other is no sure-thing either! The racing is absolutely terrible at the moment and finding good, viable bets is proving extremely tough. Hopefully one of these could oblige and roll on Saturday, as it looks a bit better at least - even though it's hardly spectacular either. Oh well, on we go!

There's no doubting that Oscar Close showed little when pulling-up at Bangor last time out but given the yard that he comes from and how weak he was in the market that day, it can hardly be a surprise. I had actually selected this unexposed 7-year-old chaser on that occasion and previously flagged him up as being a potentially useful type in these low-level handicaps. There's a good chance that I'm completely off the mark as to what his potential abilities actually are but George Baker has the powers needed to mysteriously get a horse back to form (I wonder how!) and with a bit of luck, he'll do that with this fellow.

Oscar Close gets some leeway from the handicapper for performing so bad last time out, 5lbs in total, and that enables him to race in what is an atrocious contest. The useful 7lb-claiming Trevor Whelan is also booked to take more weight off and this thrice-raced chaser looks very well-handicapped off what is effectively a mark of 92, especially as he was a 115-rated hurdler at his best. Whether he's good enough to even win a race in this code is up for debate but I thought that his second outing over fences was very encouraging - until he fell of course. That came over 2m 5f at Ffos Las in a 4-runner affair, so even if he did stay up on all fours, the form wouldn't be worth putting much faith in. I still think he shaped like a horse with some sort of ability that day and there's bound to be a race like this in him if finding a similar level of form again.

George Baker now decides to run Oscar Close at a right-handed track for the first time over fences and maybe that could help to see him in a better light. There's loads of guesswork involved in whether it'll suit or not but his only win ever (on the flat) was when going this way around and a couple of his better runs in Irish maiden hurdles came at right-handed tracks. At least I'm sure that the extended 2m 4f at this speed track is something that he'll love and if his jumping has improved in the month since he last ran, a good performance could be on the cards. This race won't take much winning and the market leaders are underpriced, so taking a chance on this dodgy character mightn't be the worst of ideas. He's 17/2 at the moment, which is a fair enough price but given the risk involved, minimal win stakes is all that can be played. The horse could do absolutely nothing and I'd imagine that the market will tell us whether we have a chance of winning here. This is more a bet in hope than expectation but who knows in this game!

It's hard to be overly confident about anything in this race, as it's debatable as to how it will be run. There are a couple of front-runners in the field but whether they'll go a good clip upfront is beyond me. If they do, I'm quite sure that Shared Moment is capable of defying her current mark and, given the very good performances she has put in last twice, she looks ready to strike in the coming weeks. This John Gallagher trained 6-year-old mare looked very well in herself after coming back from a summer break to tackle a couple of decent Kempton handicaps and off the same rating of 61 here, with a decent 3lb apprentice taking over, a big run looks on the cards if the race pans out to suit.

Shared Moment made her return on the back of an 8-month break when lining up over this 1-mile trip at Kempton in a race that would be of a similar level to this one. They didn't go much of a gallop that day and that severely hinders this mares chances of giving her best, so to see her get within 2-lengths of the winner (back in 4th) was very encouraging. It was made even more impressive as she was held up right out the back and that's not ideal in a race run like that at Kempton (for her) - although on the other side of the coin, she does like to be waited with and isn't lacking for speed. A replication of that form at this track could well suffice if they just go a better clip from the off, which might happen.

It seems as if Shared Moment is being priced up based on her last outing, which again came over a mile at Kempton - a track that doesn't play to her strengths. On that occasion, she was beaten by 5-lengths but it doesn't tell the whole story, as she got nothing like a good run through when it was needed and that put paid to her chances of getting close to those ahead of her. The way in which she travelled was very good though and I'd also rate that as being an ultra-encouraging run - one that adds further fuel to the strong suggestion that she's going to be back in the winners enclosure before too long.

Connections now return Shared Moment to Lingfield and her C&D form is so impressive, as she has never run a single bad race when lining up over a mile here. 2-2-1-1-2-3-2 is her exact form figures over this C&D, with the wins coming off handicap marks of 54 & 58 - Julie Burke taking off 5lbs from the latter. Today, a career-best run will be required to win off what is effectively a mark of 58 with Amy Ryan's claim taken into account and it doesn't look to be an insurmountable task at all. John Gallagher's mare is clearly in fine fettle and returns to run over the C&D that she performs to her best at. The only worry is whether they'll go quick enough upfront in order to help her to give best but current odds of 6/1 makes it a risk worth taking (should be no bigger than 4/1-ish) and I'll have yet another small/medium win bet. The favourite looks vulnerable to me now that she's upped in trip again and13/8 isn't a price worth getting involved in. Gallagher's charge is certainly worth having a bet on and with a bit of luck, she should run a nice race. Hopefully it'll be enough to land the spoils, although she's a tough horse to win with.