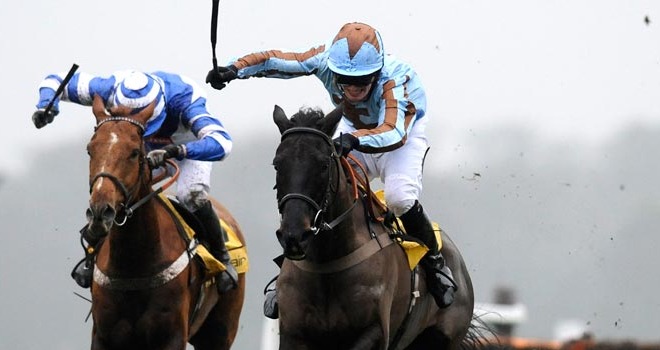 Oscar Close proved that he has plenty of ability when scooting in by an easy 20-lengths at Huntingdon yesterday. It was an atrocious contest filled with very modest chasers but the way in which he travelled was splendid and his jumping was quite decent, albeit modest on a couple of occasions - which is understandable given how hard they went at the head of affairs. Connections seem intent to get him out quickly under a penalty before a big rise in the weights is applied but I won't be on the money train again at the likely odds and it's just brilliant to be proved correct about thinking this horse had ability, as his last run left a hell of a lot to be desired. Maybe he'll be of interest again at some stage but the 1pt bet at 17/2 will do me fine!

To make things better, Shared Moment went on to score at Lingfield having been subject to plenty of support in the market (6's into 7/2). John Gallagher's mare improved on her exceptional course record, putting in a career-best performance in the process. I thought Amy Ryan gave the horse a cracking ride to send her on a few lengths clear just after they turned for home and the race was pretty much in the bag at that stage - although the horse idled in the closing stages, leaving her as fair value for further. She's a quirky type, but clearly talented and it was good to see her bounce back after getting no luck at Kempton on her previous start. A 2pt bet at 6/1 was landed in the process and all is right with the world!

It's the same story as on previous days, as I just can't find any solid bets at all and this looks to be one of the toughest Saturday's I've seen in a while. I've managed to find a total of 4 tentative bets somehow and to be honest, I'd be over the moon with just one winner. Hopefully that could happen and best of luck with whatever you play. I'd seriously urge caution though - it's not a great day for punting.

The pair at the head of the market look very skinny and Roi De Rose could well have their measure if he doesn't prove to have any issues with the drop in trip and quicker surface. David Pipe's well-related 8-year-old chaser should really make out to be much better than a 119-rated horse and it's quite surprising that he hasn't already, although it's impossible to know what this yard are at half the time. The drop in trip could be the making of him though, as he seems to possess a lot of speed and has been campaigned over at least an extended 2m 3f on the 5 occasions that he has lined out for the Pipe yard. Just how he'll enjoy the ground is a worry, but one I'm willing to overlook at the current price of 6/1.

Roi De Rose lined out over an extended 2m 3f at the stiff Chepstow track when tackling a similarly competitive handicap last time out and although he was 15-lengths behind the winner (who won next time out off 13lbs higher) in 2nd place, he ran a brilliant race until blundering 4 fences from home. He was probably feeling the pinch at that point but had travelled as well as anything up until the mistake and looked like a horse who would have little problem improving significantly on his current mark. I wouldn't think that the stiff track played into his strengths that day on what was exceptionally testing ground and he may well prefer the return to a more speed demanding course - although I still have to be cautious about the ground/trip combination.

It's interesting that David Pipe now sees fit to apply blinkers to Roi De Rose for the first time and they could help to spark out the improvement needed to be at his best over this shorter trip - as his jumping will definitely have to improve. It's not bad by any means but he's not remotely electric and will have to be at his best to play a hand here. Regardless, he's an improving horse with plenty of ability and the yard are also in cracking form, which is a plus. Conor O'Farrell is booked to take a further 3lbs off his back and that should also help. I don't think this race will take a whole lot of winning, despite a couple of impressive last time out winners lining up and the David Pipe runner is the clear value call at 6/1. There's plenty of risk involved in backing him but I'm sure that he'll be winning again before too long and let's hope that it's today. Small/medium win stakes will do the job and he should be no bigger than 4/1 or so.

Someone seems to have their eyes fixated on Barwell Bridge too, as the horse has moved from 16's into 8's in the market over the past number of hours. If they had of left well alone, and I was able to get the 16/1 about this horse, there would be a decent stake being played but having missed plenty of the value, it'll only be a small/medium sized bet again. 8/1 still represents a certain amount of value about this talented 6-year-old hurdler and if the horse can put it all together here, Warren Greatrex could be adding another winner to his seasonal tally - as I'm sure that he has a nicely handicapped animal on his hands. It's an awfully competitive race though, so missing the price may well prove to be a blessing in disguise.

A few weeks ago, Barwell Bridge ran a very eye-catching race when finishing a close up 3rd to a useful Paul Nicholls trained runner when lining out for his seasonal reappearance over 2m 6f at Wincanton. The race wasn't really run to suit a horse who does stay quite well and although the soft ground probably helped in ways, I feel he's better when it's not so testing underfoot - I also don't think that the track would really play to his strengths. To see Greatrex's charge get within a few lengths of the progressive, strong-staying winner represents a very good run and it's made even better by the fact that an inexperienced 10lb claimer was on board that day, which wasn't a help if his modest jumping is anything to go by. He should also improve for having had the run and ran a lot better on his second outing over hurdles last season.

Noel Fehily hopping back on board Barwell Bridge for the first time in a while should help and the 3m 1f trip at this speedy track should be right up his street - assuming they go quick enough from the off, which looks likely given the amount of runners in the field. A mark of 137 shouldn't prove to be beyond this animal either and although he has lined up on 10 occasions over hurdles, I don't think he's remotely exposed when getting ideal conditions. This should at least play out in his favour and he looks to be a much more solid option when you look at the prices of some of the others - many of whom have to deal with sizeable rises in the weights for winning moderate enough contests. 8/1 is still a good price about this fellow, despite not being the price that I'd like to be on at, and I'll have a small/medium sized stake again. Hopefully his jumping will improve and I expect that he'll run a good race barring disaster.

They don't come much tougher than this race but Act Of Kalanisi is a horse who I expect to prove to be ahead of the handicapper before too long and Richard Newland's lightly-raced 6-year-old hurdler could be the missing piece in this very tricky puzzle. I was so very impressed by how the horse travelled in the slowly run Ladbroke hurdle at Ascot, a race that is run over 2-miles. That trip wouldn't be close to what brings out the best in him in a race of that nature and in the end, a 5-length beating represented a very creditable run. It was also on ground softer than ideal and a combination of returning to 2m 5f and better ground should see this fellow in with a chance of running an even bigger race.

With Act Of Kalanisi having run on just 6 occasions over hurdles, he's not remotely exposed and should have plenty to give the game yet - despite being on a fairly high rating. He hasn't went this far since disappointing in a Grade 1 Novices' hurdle at the end of 2010 but his only handicap win came over a trip just shy of 2m 4f at the fairly stiff Ascot track at the beginning of last year when defying a mark of 130. That was on ground softer than ideal too and it was a performance suggesting he'd have little problems with getting even further again. This track should be right up his street if he sits prominent behind the likely strong pace and the booking of Barry Geraghty for the first time is exceptionally interesting. He should prove to be an ideal partner for this animal and the pair look to have a decent chance of getting involved here. At current odds of 8/1, he's worth a small/medium sized bet and should run a good race.

This looks to be an exceptionally tough race to call but an outside chance can be given to Fredo, an Ian Williams trained performer who is quite talented on his day. Whether he's remotely good enough to win a race of this nature has to be debatable but a mark of 130 would see him of interest in plenty of the staying handicap chases and I feel that he has a few past performances that make him an interesting contender here. It's also encouraging that there's a fair chance that he hasn't reached his peak over fences yet, as he has only lined out in this code on 8 occasions and just 3 of those were in handicaps - all of which came on ground quicker than is his want.

Fredo has run a couple of times this season (reappeared over hurdles), the last coming 2 months ago in a decent handicap chase over 3-miles at Ascot on quick ground. On that occasion, he jumped very well for a long time, travelled well and looked a solid bet to be involved in the shake up before capitulating after they turned for home. There's a fair chance that he was still in need of the outing and given the fact that he was sent off as an unfancied 16/1 shot, it was probably a run that was expected. That trip would be shy of what would bring out the best in him and the return to both a longer trip and softer ground should help to see him in a better light.

Ian Williams has his string in fine order and that's another plus to the chances of Fredo, who returns here on the back of a couple of months off the track. He missed out on a couple of races since his last outing due to overreaching in that contest but I'm sure that Williams will have him readied in an attempt to land the £31k prize here. If he puts it all in and performs to the ability that I think is there, a mini shock could be on the cards here, as plenty of the field look similarly vulnerable. It's pretty much impossible to be overly confident about anything but this one could outrun his odds and 20/1 is worth having a minimal bet on. By right I should probably take a watching brief but I've been keeping an eye on this one for quite some time now and there'll come a day when he'll land a nice prize - hopefully today.