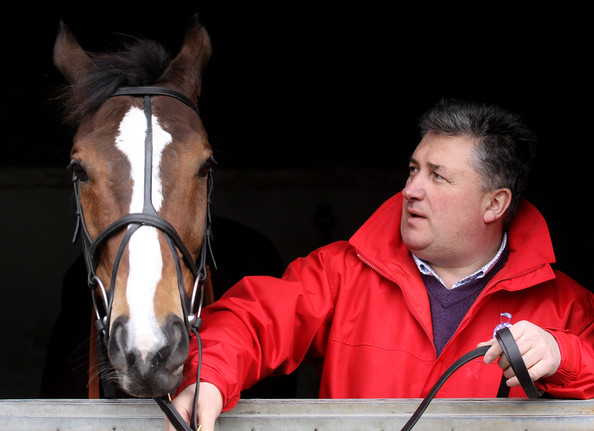 Sound Stage was far too keen for his own good yesterday and having been held up towards the rear, he had pulled himself to the head of affairs after just a couple of flights - which was hardly ideal! He was still travelling well coming towards the business end of proceedings but he had run his race by then and wasn't asked a whole lot by Tom O'Brien, understandably. Unfortunately, he came down at the last fence when looking booked for a place and let's hope that this doesn't dent his confidence, as he'll be back in the winners enclosure before too long. He was just too fresh on this occasion and should be up to giving a lot more quite soon, assuming he is none the worse for the fall. It's always disappointing to have a loser but I'm sure that we'll be collecting from him before the season is out and hopefully that'll be the case.

Spent many an hour going through today's cards and yet again I can only find a single bet, one that's not overly solid either. Regardless, he should give us a good run for our money if all is well and best of luck if you play. I was interested in a couple at Wolverhampton, especially Snow Dancer at 20's in the 6:30 but it's a very tricky race and I don't particularly like backing horses from stables who I wouldn't consider to be very good. She may be worth having a cheeky tenner on, but I'll avoid this time.

It's clear that Express Leader isn't exactly a horse to trust but if he can eventually put in a clear round, avoiding his usual mistakes, there's no doubting that he can win off his current mark of 117. Paul Nicholls' lightly-raced 9-year-old hasn't stood too much racing in his career so far but there's plenty of talent in his locker and I'm sure that his masterful trainer will get him to cut out the jumping mistakes that have caused him to disappoint in his 7-race hurdling career so far. Connections are now stepping him up to an extended 3-mile trip at this sharp track and I'm certain that he'll appreciate this trip on decent ground, if he settles - which isn't a given based on previous outings.

Express Leader was sent off as a well-backed favourite on both of his seasonal runs, the first of which was over 2m 4f at the stiff Chepstow track. Under Daryl Jacob, who is also on board today, Paul Nicholls' charge could only manage to finish 2nd despite moving into contention as easily as anything before they sat down to fight out the finish. He was unable to repel the fast-finishing winner but the race wasn't really run to suit and it goes down as a good performance, despite the result not being too favourable. It was made even better by the fact that it was the horses first outing for nearly 18-months, so I feel that it can be marked up significantly.

Express Leader was similarly strong in the market when upped in grade and dropped in trip for his next outing, which came over a month ago at the stiff Exeter track on heavy ground. I don't think that he's all that good on such testing ground and the way he travelled into the race before making a very costly mistake 3 out shows how good he can be, as he has so much travelling speed for a hurdler and just needs to cut out the jumping mistakes in order for him to reach his full potential. The bare form of the race ain't half-bad either and if he can move with similar authority around here (where his speed will certainly stand him in good stead), he's bound to be on the scene. His jumping will have to improve but his trainer is surely capable of helping him with that and I think this track/trip combination will suit him down to the ground. I'm a bit worried that he won't settle in a race that shouldn't be run at a rapid gallop but I'll take my chances at the current odds of 6/1, as he shouldn't be much bigger than 4's. Smallish stakes for me, as per usual with a selection like this, and hopefully he'll get involved.