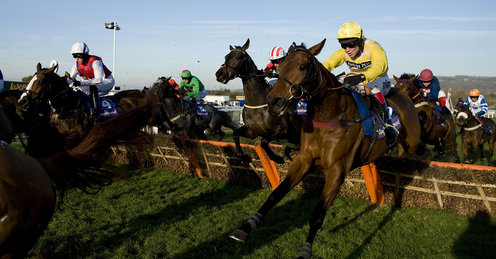 Express Leader was strong in the market (6's into 3's) on Thursday but unfortunately he wasn't so strong in the jumping department, again, and refused to settle for the majority of the race. Nicholls' charge still held every chance going to the final few flights, at which point he was trading at around 1.7, but his earlier exertions took their toll, as could have been expected, and he weakened out of the equation once again. Disappointing effort from a horse who is looking very disappointing given his raw ability and that'll be the last time I side with him - which means he's bound to win soon.

I usually love sitting down to try and solve the racing on Saturday but like most of them this week, it's bloody impossible. I've got 2 tentative selections for today and if one could manage to win, I'd be over the moon. I certainly won't be counting my chickens just yet though and from a punting perspective, it's a day to avoid. Best of luck if you play and I just wish I had something resembling a solid bet to offer you.

Have a good day folks.

I can't pretend that I think Pateese is an overly well-handicapped animal or anything but I'm finding it fairly easy to think that most of his rivals are in the same boat and he looks worthy of taking a chance on at his current odds of 14/1 in this competitive handicap to be run over a trip just shy of 2m 4f. Philip Hobbs' 7-year-old hurdler is hardly exposed given the fact that he has only run on 10 occasions over hurdles but he got hammered by the handicapper after an impressive win over an extended 2-miles at Sandown and that leaves him on a mark that's very tricky - because he's now effectively 15lbs higher for that win.

Pateese was exceptionally impressive when winning that race and it was a performance worthy of seeing him sent off as a well-supported 9/2 favourite in the Greatwood Hurdle at Cheltenham next time out. The basis for that price may be that he was ahead of the handicapper, as Hobbs' charge got to line up off a mark of 133 in that race and was due to go up a further 5lbs afterwards. However, he proved not good enough to win that contest and I think it's completely understandable, as he's just not quick enough to enjoy a race that was run at such a strong gallop. He gave it his best though and only gave way completely when falling short of room before the last flight, which he blundered (had jumped modestly throughout).

Connections then stepped Pateese up to 2m 4f for his next and most recent outing, which came on very, very testing ground at Haydock. He ran well for a long time in that race but couldn't keep up to his work on that ground and eventually faded, making it seem as if he just doesn't have the stamina for this trip. I think it's more a case that he just couldn't handle the ground/track/trip combination and the return to better ground over this trip is going to help. 138 will be a tough mark for him to overcome but he's talented, should enjoy how this race is run and looks very overpriced at 14/1. The Hobbs yard are also in good form of late and I'm sure that they'll have eyes on this near £23k prize. Small/medium win stakes will do me and hopefully the horse will give a good account of himself, as he's more than capable of getting involved.

Tricky contest to get a hold on but The Sawyer shaped as if coming right back to something approaching his best when running a very odd race (looked like he would drop away but ran on strongly in the closing stages) over the extended 3m 2f trip at Cheltenham last time out (3 weeks ago) and should love today's conditions, which are exceptionally testing. Quite whether Bob Buckler's 12-year-old is as good as he once was has to be the question but there was plenty to like about his most recent outing and he comes here as a potentially well-handicapped animal, having dropped 5lbs since his first run of the season. It usually takes him a while to get warmed up and I suspect that if he's not up to winning soon, he'll find it exceptionally tough to ever land another race.

Bob Buckler has also reported that The Sawyer is in fine form, flying at home and that he is "very excited about it", it being this race. With the ground being so testing, I think that the horse will love how this race pans out and he seems ideally suited to this track. The opposition are no mugs at all but this horse is capable of holding his own in this company and has a lovely weight to race off, which could be important given what the ground is like. Nathan Sweeney being on board is another plus, as he takes off 5lbs and gets on very well with the horse. It's quite a while since he rode a winner but at least the Buckler yard are in fine form and he's hopping up on a horse who should be hitting his peak with regards to fitness. It'll be a tough race for the horse to win but 9/1 looks big and I'll play another small/medium sized stake in the hope that he can give his best - because if he does, he should go mightily close.