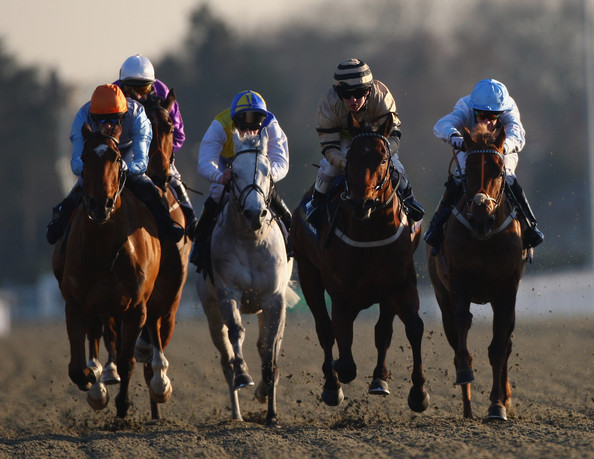 Disappointing stuff on Saturday. Pateese was well-backed at Ascot, moving from 14's into 6/1 throughout the day but it proved to be money wasted as he couldn't follow through with his effort over a trip that may just stretch him. It was a fine run for a long way though and he jumped well, travelled relatively well and looked to hold every chance before he weakened in the closing stages. I can't complain really and hopefully the handicapper will relent a bit, as he'll prove to be stuck in the mud off his current rating.

The Sawyer was subject to a bit of support over at Haydock but he put in a below-par performance and was beaten a long way from home. The horse looks to be crying out for a proper stamina test nowadays and getting hassled at the head of affairs just wasn't to his liking. He ran on gamely under pressure to get back up for 4th place, albeit a distant one, but it still has to go down as being disappointing. I doubt that I'll be putting money on him again but hopefully he can land another race, as he's a most likeable animal who deserves one last moment in the sun.

-4.00pts on the day. Disappointing but this week has proved to be a real struggle anyway (could only find 4 bets in total) and hopefully a nice winner will pop up before too long. As long as we continue to back value selections, we'll be on the right track and it will pay off in the long run - which is all that matters.

One selection for today and it's one that we sided with a couple of weeks ago. Can't be overly confident in such a tricky affair but he should give a good account of himself, barring disaster, and who knows, we might even get lucky enough to have a winner! Best of luck if you play and have a good day folks.

I selected Katmai River on his penultimate start when he could only manage a 3-length 6th of 12 over this 7f trip at Wolverhampton a couple of weeks ago but that represented a very good run in a race that wasn't run to suit him. Mark Usher's 5-year-old gelding has since run a quite decent 2nd over today's C&D when chasing an enterprisingly ridden winner in another contest not run to suit him and I'm convinced that he's ready to strike, although today's race does look quite tricky. Being sat out in stall 10 is hardly ideal but at least there looks to be a bit of pace on and that's exactly what he's after, especially if he's ridden fairly prominent himself - which is what'll need to happen if he's to land the spoils.

Katmai River is now a well-treated animal off a mark of 57, having went close off 4lbs higher in a couple of similarly competitive C&D contests last year. He's also on his last winning all-weather mark, which also came over C&D in a race that wasn't run to suit him, showing that he can be quite useful at this level even when things don't go in his favour, although that was a 6-runner affair. I'd question whether he's as good in these big fields but at least there's a very fair chance that the race will be run to suit and he's handicapped to strike before too long. David Probert being booked again is also a solid hint, as he has guided this horse to his last couple of wins and has C&D form figures on board the horse reading; 1-2.

Probert is also riding quite well of late, with 4 winners and 5 places from his last 20 rides. He has an exceptional record at this track and does well when riding for Mark Usher, who has his string in good order. It all looks quite positive and with a bit of luck, Katmai River will run a big race. The market will probably guide our chances here, as connections seem to back this fellow when he's on the job and if it doesn't speak in our favour, the money could be gone before the race is off. Regardless, 10/1 is too big (7's fair) and placing a small/medium sized stake doesn't look like a bad idea. The market leaders look vulnerable to me and I couldn't have them at their prices, so hopefully this is the one to oppose them with.