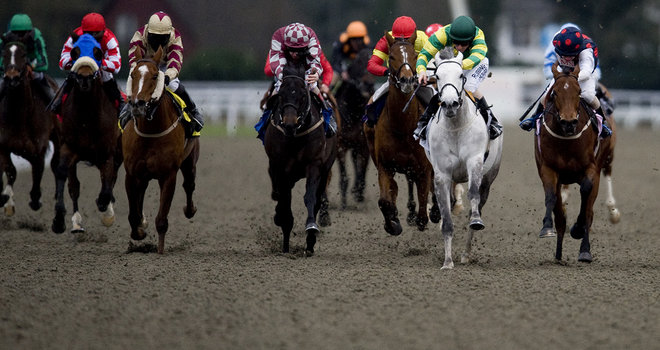 Salient gave it his best shot at Lingfield yesterday but couldn't repel the opposition despite getting a race run to suit and eventually came home in 5th place - not beaten far. It was quite a disappointing effort given how well he shaped last time out and having had everything run to favour him, I was expecting him to go quite close before they swung for home. It wasn't to be but he'll remain one to keep on side for a while yet and I'm sure that connections will find a suitable race for him in the coming weeks. Even if he ran to his best here, it's extremely doubtful that he'd have beaten the winner anyway, so it probably doesn't matter a whole lot and we should continue to get a nice price about him.

One selection for today and he runs in a sprint at Kempton. The words "sprint" and "Kempton" usually scare the life out of me but this one should be in with a decent chance of making the frame if it's all systems go. I'd say that the market will show what sort of chance we have of ending the losing streak and let's hope that it's a positive one. Winning in the long-term is all that matters to me but a few people have signed up since the last winner and I hope to have ye off the mark before too long (it's proving a very tough task at the moment unfortunately). Have a good day folks and best of luck with anything you back.

Another tough race to solve but the lightly-raced Whaileyy could be the solution if putting it all in and given his sires excellent record on Polytrack, and over this C&D (7-21; 33%), he could take a lot of beating on what is just his second start for the Marco Botti yard. This former Sir Michael Stoute trained gelding hasn't lived up to his original 120,000gns price-tag but he has shown some promise in many of his races, not least his final start for the Stoute yard (June) when he dropped in trip to go sprinting. That came over the speed-demanding 6f at Goodwood and although he could only finish 2nd (off 1lb lower than today), half-a-length behind an easy winner, it showed that he had absolutely no problem in plying his trade over 6f.

Whaileyy then wasn't seen for over 6-months and switched stables in the meantime, joining up with the masterful Marco Botti. He had one run for Botti so far, which came nearly a month ago over 7f at the sharp Lingfield track. He was sent off as a relatively weak 13/2 shot and ran as if needing the outing, as he was still bang there pressing the leaders with a furlong to go before fading out of the conclusion quite tamely. It was a very encouraging effort though and I'm not fully convinced that Lingfield would suit him regardless of how forward he was on the back of a break and he should do better today if connections have decided that it's all systems go - which is what I'm hoping (the market will guide our chances of success).

Botti also decides to fit Whaileyy with first-time blinkers and that's a quite interesting move, as he ran so well with a visor applied for the first time on his final outing for Soute. They may just be needed in order to keep his mind on the job, as he has looked awkward in the past and if the desired effect comes to fruition on a surface that his breeding suggests he can excel on, a big run could be in the offing. The Botti yard are in decent knick of late too and Adam Kirby takes the reins for the first time. The Botti/Kirby combination has a 26% strike-rate at this track (8-31) and this is their only runner/ride today. I think that they've a nicely handicapped animal running in a race that should be favouring his run style and hopefully it could come together for this relatively frustrating animal. 6/1 is a nice price about him and I'd mark down his realistic chances of winning at around the 3/1-7/2 mark, even though that may sound a bit mad. It's a tricky race, but he could be a league above if readied to give best and hopefully that's the case.