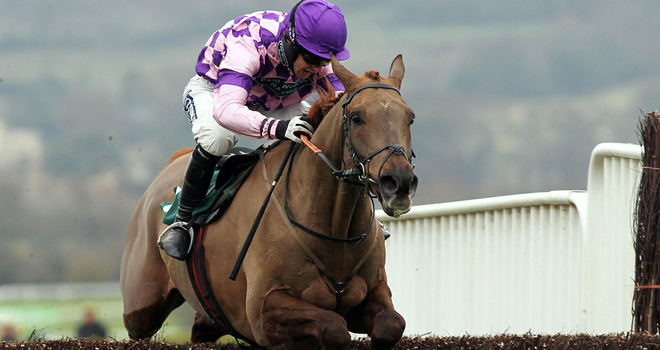 A return to winning ways was provided by Whaileyy on Thursday as he landed a 3pt bet at 6/1 when scooting in at Kempton, proving that he was thrown-in off his rating of 82. The first-time blinkers obviously did him the world of good and he travelled brilliantly on the back of what was a modest gallop. Once set down for the drive, it took him a little while to pick up but he flew away from the opposition once hitting his stride and won by just shy of 4-lengths. The handicapper will hit him hard for this but I'm sure that he'll be even better in a race that'll be run at a ferocious gallop over 6f and he could be one for again at some stage in the future.

I usually like to have a few throws at the board on a Saturday but it looks rather impossible to do so today and as a result, I'm only backing two. One is an outsider who could do anything and the other is a shorty running in a hot Grade 2 chase, so God knows whether I've managed to find a winner. Hopefully I have and best of luck if you play folks. It should be a good day of racing regardless but it looks like one that's not worth getting heavily involved in.

This is an atrocious race to be betting on but Saint Are is a horse who has more than enough ability to win a race like this off top-weight (140) and he looks overpriced to do so at 20/1. Tim Vaughan's 6-year-old was a Grade 1 winning novice hurdler last year and his trainer fully expected him to make up into a very useful chaser - something which hasn't developed as of yet. However, there has been enough promise in some of his novice chase outings to suggest that he'll be up to landing the spoils in a useful contest once he cuts the jumping mistakes that have blighted his career in this code thus far.

Saint Are comes here on that back of a run in Grade 2 novice company over this C&D nearly a month ago and although he was beaten a long way in the end, it doesn't tell the whole story. Tim Vaughan's charge was jumping and travelling well in the main before he made an error at the fourth-last, one which caused him to slither on landing and that was his race run. Had he not made that mistake, I think he was going to fight out the finish in what was a very useful contest, although that's only guesswork. Regardless, he looked like a talented horse on occasions and giving weight away in this race mightn't be an impossible task for a horse with undoubted talent and potential to improve.

Ground, trip and track all suit and my only worry is the really poor form of the Tim Vaughan yard, who just aren't firing at all. Overlooking that, there's plenty to suggest that Saint Are will be right at home in this race and hopefully Richard Killoran can get him into a nice jumping rhythm, as that'll be key to whether he has a chance of even running well. It's an awful race to try and gain an edge but I'm quite sure that 20/1 is a very nice price about this Grade 1 winning hurdler and he could outrun that price-tag if he gets a bit of luck. Very minimal stakes are all I can advise and hopefully he'll get involved at the business end.

Another open looking race here in which it's hard to separate many of them. Time For Rupert is a horse that I've always rated highly and it wouldn't surprise me if he ran a stormer in the Gold Cup at the festival, so he obviously has to come into the equation for this race. Paul Webber's stable star hasn't exactly set the world alight this season but he got a nice little confidence booster when winning easily over 3-miles at Newbury last time out in a modest graduation chase and hopefully that'll have him spot-on in order to run a cracker now that he's returning to the track where he always gives his best.

In that race at Newbury, Time For Rupert had to cut out his own running in a 4-runner affair and he put in an exemplary round of jumping in the process, which meant he never had to see another rival. The winning distance wasn't very far but he won as he liked and the second horse is one that I've always thought a fair amount of, even though he's just a very good handicapper. I wouldn't think that a slowly run race over 3-miles at Newbury is exactly the sort of test that Webber's 8-year-old is after, so it has to go down as a very good performance given how easily he went about his business.

Previous to that, Time For Rupert has disappointed in the Betfair Chase over 3-miles at Haydock but again, that's never going to be a test that'll see him perform to his best against such high-class opposition and he wasn't exactly disgraced, despite finishing a long way behind those at the head of affairs. The return to Cheltenham is absolutely key and apart from his forgiveable run in the RSA Chase at the festival last year, his course form reads; 1-2-2-1-1. The extended 3m 1f trip here will bring out the best of him I'm sure and the race is likely to be run at a good clip, so he won't have to set off in the lead as he has done on 2 of his 3 runs this season. The opposition are no mugs and he'll have to prove himself as an exceptional talent to win this but I'm confident that he is and 7/2 isn't a bad price. Small/medium stakes will do, as there's plenty of risk attached but hopefully not enough to make him lose!