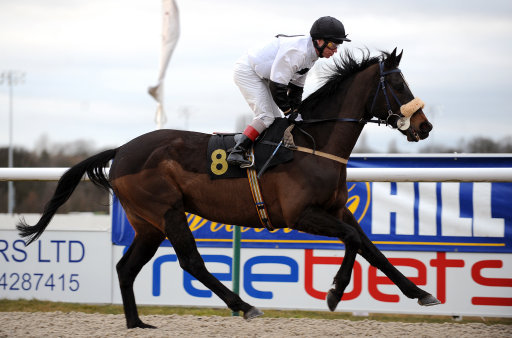 Saturday was a fail, unless the intentions were to pick non-jumpers. Saint Are was fine in that department for a long time but eventually came a cropper when blundering and unseating his rider at the 13th fence. It's quite possible that he was beaten at the time (despite still being in the leading group), as he was in need of a lot of rousting along to hold his position but as a horse who stays further, who knows really. He's not the type to do everything on the bridle, especially over that trip and I think he would have posted a respectable effort at the very least, had he stayed upright. I'm sure that he'll be able to land a nice contest over fences but returning to further on a flat track may be what he's in need of and at least we'll continue to get a nice price about him given his dodgy form figures.

Time For Rupert's recent form received a nice boost with The Giant Bolster routing a good Grade 3 field earlier on the card but it didn't matter a jot as Paul Webber's charge put in a miserable performance in the Argento Chase. His jumping was poor in the latter half of the race and he never had a chance of landing a blow, although he did stay on again having looked likely to drop way back at one stage. I've no idea what to make of the horse now and it looks like he's not going to reach his obvious potential unless some miracles are performed. The Gold Cup is likely to be off the radar altogether now and I was exceptionally disappointed with his run on Saturday, as he should be more than up to winning that type of modest race.

-3.00pts on the day. Saturday winners are deserting me, which is annoying as they're usually my forté!

Today is pretty uninspiring stuff and I'm surprised I've managed to find a selection at all. He's as risky as they come given his overall profile but could be up to outrunning his price and is weighted to get involved. Hopefully he does exactly that and best of luck if you play. Have a good day folks.

This is a really tricky low-level handicap and I'm just hoping that it'll be run at a good clip, which is a possibility but far from a given. If it is, then Twice Red should have some sort of say in proceedings if he isn't the regressive animal that his form figures suggest. Having made an impressive winning debut for David Barron (only run) at the beginning of last year, this relatively well-bred 4-year-old hasn't went on to do anything in handicaps for Derek Shaw and certainly hasn't justified his £15k price-tag. I'm not totally convinced that he's a forlorn hope just yet though and plenty of excuses can be found in the 6 races that he has had for this yard - many of which have seen him being completely ignored in the market.

Twice Red lined out in a Lingfield claimer - last time out - over this 7f trip having failed to run his race over a mile at Southwell the time before but he was completely unsuited to how the race panned out and did quite well to finish just over 3-lengths behind the enterprisingly ridden winner - who he meets on 8lb better terms today. I wouldn't think that the sharp Lingfield track plays into his hands at all and when the race is slowly run, he's never going to be seen at his best - so it must go down as an encouraging effort.

The handicapper has also dropped Twice Red by 4lbs for that run and he's now 9lbs lower than when running an encouraging race on his handicap debut at this track, over an inadequate 5f, in June of last year. Wolverhampton is much more suitable for him and I'm just hoping that they'll go a good clip upfront, as he'll need that to be seen at his best. Being drawn in stall 1 is no bad thing either and he should be able to get a good position if he can just break on terms with the rest, which hasn't always been the case in his career. The massively in-form Joe Fanning being back on board is another positive and the pair look quite overpriced to do the business at current odds of 14/1. It's hard to know with a horse like this but I'm sure that there's ability in his locker and he's worthy of taking a small/medium chance on. It may be the case that he's just regressive and not very good but his last run was encouraging, despite being at a modest level, and a more suitably run race would see him in with a chance off a career-low rating.