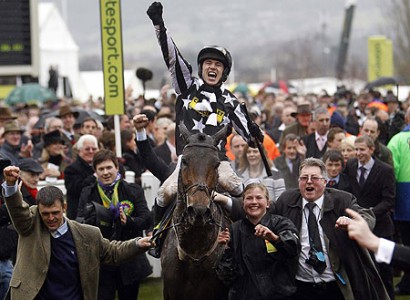 Unfortunately Lastkingofscotland got away from the stalls too quick for his own good and ended up in a very prominent position during the opening stages of the race, which isn't ideal for him nowadays. He was then reined back by Hayley Turner in order to drop him back into midfield but it set him alight for a little while, something which I wasn't hoping to see.

In the end, he never made an impression on the leaders but wasn't disgraced, nor beaten by very far. I wouldn't imagine what he had to endure mid-race was overly helpful to his chances and he'll be one for again over that C&D. It was quite a modest performance but I'm sure that Conor Dore will have him ready to strike before too long. The horse was also weak in the market before the off and maybe it just wasn't going to be his day. No harm though, it could always be worse!

-2.00pts on the day. If I could just get that bloody elusive winner I'd be flying! Hopefully it'll come our way soon.

Another day with just one selection. Can't find anything solid and yet again it's a risky one, but one who could go well depending on a few things. Fingers crossed that he'll run a good race and any market support would be significant.

Taking on the trio at the head of the market looks like a good idea here, as I feel they're all underpriced and can't be supported with any sort of confidence. A couple of the outsiders look lively and Stormhoek may prove to be the best of the lot if he can put his best foot forward on what is just his second outing over the larger obstacles. This former Alan King trained bumper winner has often flattered to deceive, travelling strongly in his races before finding little off the bridle. I don't think there's a whole lot to it really and he remains an animal with plenty of improvement to come.

Having left the King yard, Stormhoek joined up with Nigel Twiston-Davies before making his chasing debut at Ffos Las in November. That was his first outing for around 18-months and one would imagine that it may have been needed. He certainly ran as if it was and didn't travel as he can, eventually fading out of the equation a long way from home. It's quite possible that the very testing ground wasn't what he's after and his jumping was modest too. His stablemate, who was gambled on before winning, looked the second string based on jockey bookings and maybe it was just a case that connections weren't expecting a whole lot from this fellow that day - even though he was sent off as a 3/1 shot. He should come on for the experience anyway and being a horse who has only lined out to run on 7 occasions, he remains lightly-raced and open to further improvement.

Since then, Stormhoek ran in a decent looking novice handicap hurdle a few weeks ago - run over 3-miles on testing ground at Ascot. He was ridden much more forward that day and although he was beaten a long way in the end, he had travelled and jumped well before attempting to quicken the pace a long way from home. I suspect that his questionable stamina for the trip (on that ground) gave way and once beaten, he wasn't given an overly hard time of it. Also, he sent off with a BSP of 84.47 and it's obvious that nothing spectacular was expected. It was still a very encouraging run for a long way (he looked much better in himself), despite being beaten so far, and his fitness should have improved for the outing too.

Stormhoek made his debut over fences off a mark of 110 but, as a result of being beaten a long way in his pair of outings this season, the handicapper has dropped him to a mark of 100 - which is very workable for a horse who hasn't given his best yet (he's bred to be a chaser). Connections are now dropping him back to the bare 2m 4f at this sharp, right-handed track and I feel that's going to suit him to no end if his jumping has improved, which I'd assume it has. He's also wearing a tongue-tie - which was on last time out over hurdles - for the first time over fences and that should help him keep up to his work when the going gets tough.

I'd prefer if they rode him a lot handier today, as that's what's needed around here and he seems like a relentless galloper who will definitely appreciate being ridden that way - unless they go off very fast at the head of affairs. The market will probably tell what's expected here but as it stands, 12/1 is too big. This horse has ability in the locker and given that he's the type to improve with experience, I expect that it'll come out before too long. The ground should also be more suitable today, unless it rains a lot, and I find it very hard to believe that those prominent in the market are any value at all. 7/1 would be the price that I'd have Stormhoek down as and if he jumps well, I expect to see him in with a chance. Small/medium win stakes will suffice and although it may prove to be a tough ask for him, he's one to keep an eye on and should be up to winning more races in this code. He's too well-handicapped to ignore and the Twiston-Davies team will hopefully get him to realise his potential - preferably in this race, which is quite modest really.