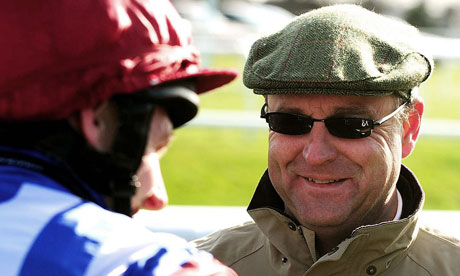 Stormhoek ran a very odd race at Ludlow yesterday, as the last thing I expected to see was him struggling for pace in the early stages of the race (he usually has a very high cruising speed). However, he warmed to the task nicely and began to move menacingly on the bridle in the latter third of the race. His jumping wasn't great in the main, as he was slightly out to his left at plenty of them (not ideal on a right-handed track) but it was markedly improved - and solid enough - when compared to his debut run over fences.

Having been backed at 12/1 the previous night, he returned at an SP of 10/3 - so connections must have got fairly stuck into him given such a large move in the market (the price had held up very well throughout the morning - barely moved until about midday). I suspect that there'll be a lot more to come from him in time and he really should improve for the experience. It wasn't a great race, far from it, but he's capable of defying higher marks still and could be of interest in the future - although he won't be much of a price next time out in the type of race that he has to contest. Regardless, it's great to get the service off to a good start early enough in the day and I hope that everyone made a few quid there.

+24.00pts on a solid and pressure relieving day at the office! I just wanted to get the first winner out of the way early and it's great that it was a worthwhile price too.

Only one selection again for today. It's not a great day of racing at all but the one I've selected has a chance of going well and hopefully he'll do exactly that.

Some interesting contenders in this 6-runner handicap that's to be run over a mile at Lingfield and although it's hard to split a few of them, Aquarian Spirit looks to be the clear pick from a value point of view. If connections decide to make use of him from the off, I feel that he'll get the chance to dictate a nice, steady tempo and could well knick it from the front. It's not exactly ideal to be at the head of affairs at Lingfield but if he is sent on and gets left alone, I'm quite sure that he'll prove to be a very tough horse to get past. Richard Fahey's 5-year-old gelding is as game as they come and although his record is 2-20, it doesn't exactly do him justice. One thing he'll do is try, and his efforts could well suffice here if he gets a bit of luck.

Another interesting aspect is how well Aquarian Spirit can go fresh (hasn't run for the last 97 days), as he achieved his last career win on the back of a very long lay-off when scoring over this 1-mile trip at Redcar in April of last year. That was a decent race, better this this one, and the game Richard Fahey animal beat off some decent company to score by half-a-length in a race that he looked beaten in at one stage. That was off a mark of 76 and he's returning here off 2lbs lower, so he is well-handicapped at least. I rarely pay much attention to the bare form of races but the 3 in behind him that day went on to score next time out and the form of the race looks solid - even though it doesn't have much of a bearing here, it does show how capable he is off this mark.

Aquarian Spirit will be running on the all-weather for the first time but there's plenty of hints in his breeding to suggest that running him on polytrack is not a bad idea. I also feel that this speedy track will play into his favour if Tom Eaves - who's on board for the first time - can gauge the fractions well enough. Eaves has a cracking record around here in the past 5 years, with 12 of his 49 runners entering the winners enclosure and he shows a level-stakes profit of +18.37 from them. He's an interesting booking for the Fahey yard, who only send one horse down to Lingfield (Hanagan rides 2 at Wolverhampton), and it could be the day for this horse if all goes well.

Overall, it's not a great race. My Kingdom being a 7/2 shot (and shortening) shows this, as his recent efforts have been diabolical. However, he has only had one outing for the Ian Williams yard (went off very big price in a much better race) and if he works his magic with the horse, there's no doubting that he's absolutely thrown in here off a mark of 74 (12lbs lower than last winning mark; rated 92 just over a year ago). He's still a very risky proposition despite being so well-handicapped and at the prices, isn't worth taking a chance on - even though he may well win. The market will tell the story here but I wouldn't go near him unless I got a significantly bigger price.

Perfect Mission is as low as 2/1 in places and that's nowhere near a price that would represent his realistic chance of success. He's far too short in the betting to get involved with. Hereford Boy is potentially on a winning mark if he puts it all in but he's frustrating, looks moody and shouldn't be suited by how this race pans out unless something runs completely different to how I expect. Aquilifer is also too short at around the 7/2 mark and doesn't strike me as being overly well-handicapped in this race, even though he does run well at this track and isn't without a chance if everything falls his way.

Aquarian Spirit, despite not having the best strike-rate in the world, looks worthy of support here at 6/1. The market will probably indicate how he's expected to run but at the moment, I feel he offers a bit of value and shouldn't be much bigger than 3-4/1. Small/medium win stakes will do the job again and I just hope that Eaves is instructed to go forward and dictate the tempo, as the horse should be seen at his best around here when employing such tactics if left alone in this small-field race (his form in them is solid). I'd nearly go as far as saying that he won't win if he's not coming into the home straight with a bit of a lead in-front, which makes him a risky selection. Regardless, every single horse out there is risky and this one could be up to doing the business if ridden as I hope.