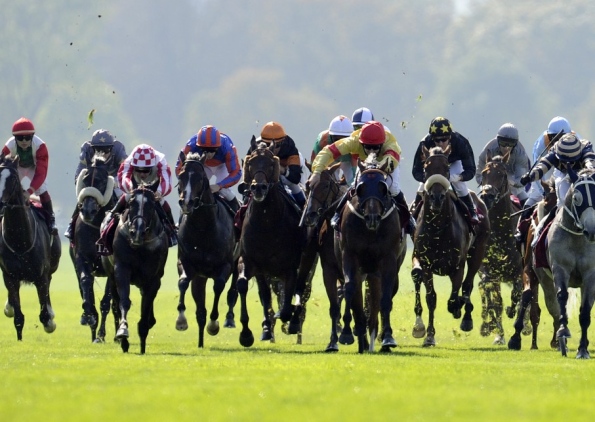 No luck on Saturday unfortunately. Rileyev was bang there with every chance when they had a couple to run (hit 2.58 in-running) but he hadn't jumped too well up to that point and made a shuddering error at the second-last, nearly unseating his rider. That put paid to his chances but the gambled-on and well-handicapped Paul Nicholls trained winner wasn't going to be for catching and I can't have any complaints at all. My selection wouldn't have beaten him regardless and although he was a fair way back by the time he came up to the finishing line, it wasn't a bad run. He could be one for again, depending on conditions , but may well be in the grips of the handicapper.

Wymott shaped a lot more encouragingly despite fading out of the equation in the closing stages of the race and I'm still quite sure that he'll have his day in the sun before too long. The one worry has to be how awkward he looks, as he just doesn't seem to want to know at times and holds his head like a horse with issues. Regardless, some sort of headgear could work the oracle with him and at least the raw ability is in the locker. The handicapper will probably relent now, after a couple of seemingly poor runs in a row, and he will most definitely remain of interest. He ran well for a long time here, hitting 4.30 in-running and just couldn't keep up to his work. It was another race in which my selection wouldn't have beaten the winner anyway and I feel that there'll be money returned from this fellow before too long, even though many good judges completely disagree with me.

Looks Like Slim was my outsider of the day but he ran the best race of the lot and looked at one stage as if he was going to play a big part in the finish. Having travelled and jumped as well as anything under the brilliant Wayne Hutchinson, this young hurdler made an encouraging move with a couple of flights still to go - at which point he traded near even-money in the run. When push came to shove, he just couldn't go on in the testing ground and faded out of the equation, which was a recurring theme with my selections on Saturday. I'm quite happy that I didn't have an each-way punt though, as he lost 3rd place in the closing stages and would have had that wrapped up at the very least if he didn't get so tired in the ground. This animal is well-handicapped when getting his optimum conditions and could win a decent race for his small stable before too long. It was a solid performance and no complaints here again.

-5.00pts on the day. Would have been nice to get one in on my first Saturday of the year but that's racing and we'll have plenty more days that go the same way. Being patient is the key and hopefully we'll end up rewarded.

Just the one selection for today. Was going to avoid any racing and have an easy night but having went through the cards whilst bored, I was quite taken by one. I'm hopeful of a big run, but he isn't without his risks and let's just hope that he breaks away with the group - as he has fluffed the start before and that'd ruin his chances around this track. He'll have to be prominent to win and the market could guide.

The class-dropping Bandstand looks sure to have a say in this contest if all is well and looks overpriced to gain his first handicap victory at current odds of 5/1. Being a 6-year-old who has only lined out on 10 occasions - the first of which wasn't until 2 years ago - it's clear that Bryan Smart's sprinter has had his problems in the past, but he remains open to further improvement. He also looks to be an exceptionally well-handicapped horse if putting it all in on his first run on fibresand since his opening pair of career outings, both of which were in maidens - obviously I suppose.

Those runs came over C&D and on both occasions, he ran into useful prospects - the first of which was when he finished 2nd (despite being held up in rear, which isn't ideal here), 4-lengths in behind my former winning selection Poet's Place, who went on to win a C&D handicap off 75 in the most impressive fashion on his next outing (got an RPR of 99) and was last seen running in a Listed contest when rated 102 in April of last year. That form has no relevance now, but at least it shows that he handles this unorthodox surface and some other hints in his breeding suggest that he's going to prove fully effective on this surface.

Bandstand returned from a short lay-off to run in a much better race than this at Kempton and given the fact that he was allowed to be sent off as a 16/1 shot that day, I doubt that too much was expected by connections. In the end, he finished in 8th place in the 10-runner contest but that doesn't tell the whole story, as he looked like a big danger coming into the closing stages of the race and only weakened out of the prominent positions late on - eventually beaten by just 2-lengths in a blanket finish.

That run was most encouraging as to his current well-being and now, Bandstand is deemed worthy of a 2lb drop in the weights from the handicapper - which I feel is exceptionally generous. He's now able to race in a much weaker contest and has the extra assistance of Justin Newman on board - a very capable rider who takes off 5lbs (21% strike-rate for these owners - Eaves has 7% and rides the trainers only other runner at the track, his only ride; it may be significant). Newman knows this horse well having been placed on him twice from 3 rides during the summer and the weight that he takes off must leave the horse in with a massive say in this race. The opposition who are ahead of this fellow in the market are too short for my liking and although I've missed 7/1 about this animal (thanks RP Spotlight), his current odds are too big. Medium sized win stakes should be played and I'd have him down as no bigger than 3/1.