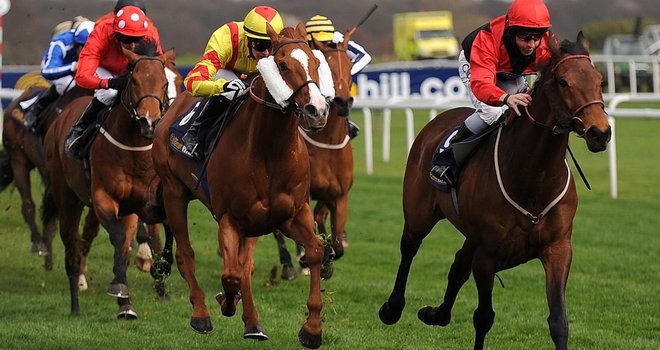 Mince was bitterly disappointing at Newmarket, being completely unable to land a blow and I cannot find any obvious excuses. Being held up clearly didn't help, but she still should have performed much better than that on ground that she would have had no issues with and she simply didn't given her true running here. For what reason, I don't know but I still think that she's up to moving beyond her mark and keeping her on side is the right thing to do, though it's rare that I'll be too interested in punting in 3-year-old h'caps.

There's very little that I can say about Racy, as the hilarious start ended his chances before it began. He dipped in the stalls, thus making Phil Makin have to delay the removal of the horses blind and that made him miss the kick badly. You can't get away with that in a 5f sprint, especially as York on such ground and this was nothing more than a spin for the horse in the end. Write it off, it wasn't his true running, obviously.

Three selections for today, another that has been Pricewise'd and one that may seem mad on the face of it given the task that he faces, but they're all overpriced and that'll do me. I'm pulling the stakes down for a while in order to try and find my judgement again, as it has completely deserted me since this ground has come out to play and I now look clueless, though we've been unfortunate on many an occasion as well. It has happened before, a fair few times in the past few years, but I do understand that it is unacceptable seeing as I'm someone who's supposed to know what he's at and that certainly doesn't look the case at the moment. We live in hope though, and long-term, we will be winning, as is usually the way it goes and this is just a blip, albeit a bloody massive one. I do apologise, and will try my utter best to make it up to all.

If Hamilton gets the go-ahead, Fast Shot will be running for toppin' money in the Scottish Stewards' Cup and he will love running through the swamp, though again I won't be backing him as I don't think there's much room for moving at the price and I don't want to jinx him (some prize money would more than cover what I'd possibly win anyway). Again, he seems to have got a grand draw with the possibility of getting a proper toe into the race being good, but it's a real pity that Paddy Aspell is on board as I just don't rate him at all and his record at the track is crap (0-37). This post is just to say that I wouldn't put anyone off a punt on him if they're following him, but the price is skinny considering it's a much tougher race than when he had an ocean to suit at Newcastle and if I wasn't involved with the horse and was wanting to support him, then I'd be holding out for a bigger price (about 10's). I'm fairly sure that he's capable of winning off this mark when the ground is like this (and the track will suit), so if you think he's a good bet at the price, then don't be put off by the lack of me backing him. Tim's horses are flying at the moment as well and he will be trying at least. Hopefully he'll do himself justice and secure a place in even bigger money races for the rest of the season. I really, really want to see him get his ground in the Ayr Gold Cup. I'd LOVE to win that.

There's no doubting that Belgian Bill hasn't won as often as his ability should reflect, but he twice caught the eye when running a pair of big races in the space of just a few days at Royal Ascot and a welcomed return to winning ways may not be too far off for George Baker's 4-year-old colt. Today, he tackles another lucrative handicap, having run in both the Royal Hunt Cup (1m) and Buckingham Palace Stakes (7f) at Ascot last month, showing up really well in both before fading out of contention. The first race was over a mile, for which he was well-fancied and looked likely to play a big hand in at one point (traded 2/1). That was as a result of pulling his way to the front going nicely with about 3f to run and he was simply produced far too early. He doesn't do a lot in-front, so to see someone with the skills of Fallon send him for home that far out in the big-field handicap was rather mystifying and resulted in the horse predictably fading out of contention (not given a hard time). It was a similar story a couple of days later, when he led well over a furlong from home and ended up getting beaten by 5-lengths on testing ground, but it was encouraging at the same time and to run so well in such demanding races over the space of a few days bodes very well. Richard Hughes being booked is something that I'm delighted to see, as he'll surely give the horse a ride full of confidence and that's what is needed. He travels so well and will need to be waited with, which is the type of horse that Hughes does so well on, plus he's 3-4 when riding for Baker. This C&D will suit his charge too, he ran a cracker as a juvenile here, and the ground will pose no issues. Being drawn near the stands' side shouldn't be a problem either, though you never know in these big-fields and I can't get too much of a handle on how it could possibly be run. Overall, 10/1 is a decent price about one who should be up to running a big race and hopefully he'll get the luck required in order to leave Newmarket victorious.

Again, there'll be no prizes for originality but the improving Media Hype looks just the type to land a big pot like this off his current mark and the price on offer is just about good enough to warrant a bet. Karl Burke's 5-year-old is very lightly-raced for his age, having run on just 8 occasions since making his debut on track last season, when trained by Luca Cumani. The reason for his lack of outings is apparently due to having problems with his feet, which his new connections have obviously sorted out and he's finally fulfilling the promise of his nice pedigree. Since joining this new yard, he has lined up on 4 occasions, winning twice (very easily off 70 & 83, latter over C&D) and finishing a fairly unlucky head-second at Haydock on testing ground. The other run came a couple of weeks ago, off today's mark of 91, but it was on genuinely quick ground at Newmarket and he didn't get the best of luck in-running, nor did he look comfortable over the ground. The return to a track like this will suit more, as will the big field and the softer ground, assuming that doesn't lead to a bias favouring those on the speed because he likes to be waited with. He travels beautifully though and still shapes as if being a bit green, so there could be plenty to come from him yet. Worries are there to be had due to running just a couple of weeks ago, as connections thought that he may need a penalty to get into the race but he's in now and runs off what could be a workable rating. His draw in stall 2 mightn't be ideal based on the stats (higher drawn runners usually do well in this race) but I don't think that there's much point in putting too much emphasis on that and at least the race is likely to be run to suit. Graham Gibbons taking over in the plate for the massively in-form yard is a positive in my book too and he looks the perfect man to ride this horse patiently, as is likely to happen. There's not much room for error at the price but the horse has an obvious chance and looks capable of further progression, so the standard sized stakes should be played. Right Step is a lively outsider if the draw isn't a problem.

Plenty of doubts are there to be had with regard to the market leaders and I've got no interest in going with any of them. Shocks in sprint races happen aplenty and The Cheka may well be capable of causing a real upset here, with no doubts to be had with the ground and potential improvement to be had with him over a testing 6f. Campaigning this 6-year-old as a sprinter seems like an afterthought on the part of his trainer but he has looked better than ever this season, last time out aside, and doesn't exactly have an excessive amount to find on ratings with a lot of this field. His run at Royal Ascot last time out would suggest that he is a no-hoper here, as he showed nothing of note. To be fair to him, he dwelt from the stalls and had to be rushed up, which wasn't ideal and I'm just going to overlook it as it just wasn't his true running at all. His two outings before that were very decent though, first winning a Listed race at Doncaster on his first race over 6f, before running a head-second in the Group 2 Duke Of York (joint-fav Society Rock a neck behind). In all reality, he will have to step up a good bit on each of those runs but I believe that this track will favour him even more, as will the ground which he clearly has no issues with. It will be very tough for him to get involved here, but he should be ridden to have every chance of giving his best and taking such a big price about his best being good enough is not a bad idea given what the ground is like. His trainer also reports him to be in cracking form and his price is massive when compared to many of the others, most of whom aren't much better. A visor is applied for the first time as well and hopefully that will have a positive impact.