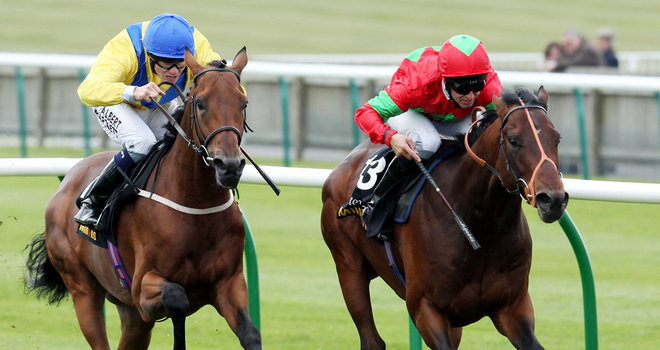 Sundays goings-on would have been tough to take even if occurring in the middle of a hot streak, and to say that it is devastating would be a massive understatement. We had three selections, all of which could have won and we should have been wiping out a nice portion of the recent losses. Instead, we've another trio of losers to add to the slate and that's rather harsh, typical of recent fortunes. Tinshu was a sickening one to take, as she would have won but for being denied a clear run on a couple of occasions, all made worse by the fact that she was sent off as a 20/1 shot. There's not much to add, though clearly Ascot suits her perfectly and if she's ever a big price around there, take it. Disappointing stuff, but that's how it goes.

I wanted to see Cill Rialaig ridden prominently, but she was held up and that was very frustrating seeing as the race would have panned out perfectly for her if she was on the speed. At the same time, she moved beautifully into contention and was produced to have every chance, coming there with what looked to be a winning run only to find a game winner not for passing. That wouldn't have been the case if she was seen to be ridden up there from the off, as she would have been the one not for catching. It was her final outing on a racecourse, as she's in foal, and it really was an opportunity missed for connections to say goodbye on a winning note. 'twas a cracking run though, no complaints and hopefully she'll have some nice foals!

Mass Rally did exactly what our worst fears were, coming into the race cruising along like a real top-class horse before finding one too good for the seventh time in his career. Paul Mulrennan gave him a brilliant ride, exactly what the horse needs to be seen at his best, but it's a real pity that he didn't let him down a couple of strides earlier as he delayed the challenge that bit too long. His mount consented to go by just shortly after the winning post and for all his flaws, he may have done so in time if produced slightly earlier. No complaints though, it was an excellent piece of riding and nearly paid off. It's such a pity that MR does not consent to find off the bridle, because he'd be able to show the world what a talented individual he is.

Not much of interest for today, despite plenty of racing being run on proper ground for a change. There is a selection for us to get stuck into, though he is quite reliant on things falling his way (watch his recent runs) and it's possible that they may not here, so don't be shocked if he runs below-par. His price is far too big at the same time and hopefully everything will be run to suit. Have a good day folks and the best of luck.

Pretty much all of this field can be given a chance, but it's Freddy Q who appeals most at the prices and I think that he could win this race handily if getting a race run to suit. To win, he is going to be in need of a proper race-pace from the off, as he's quite a free-going sort who wants the pace to collapse in front of him and I'm not convinced that it will be run to suit, making him a risky proposition who could potentially bomb out of the race altogether. The price more than makes up for it at the same time and I'm convinced that this Richard Hannon trained 3-year-old has the scope to improve beyond his current rating of 85. The main reason for his price is that he disappointed in grand style on his last two outings, but there's plenty of excuses for them and taking a chance on this colt resuming his previously progressive ways looks like a worthwhile venture. He only had one run before disappointing on those recent outings, but that came over C&D in a race that has worked out quite well, and was victorious despite being the apparent Hannon second-string (sent off at 20/1). The way that he went about his business was impressive I thought, after being set plenty to do by Sean Levey (then claiming 3lbs). He was still a bit awkward under pressure, but powered up the hill to win a shade cosily and looked like one to keep an eye on. He's effectively rated 7lbs higher today, but coming back to a track like this on quicker ground will be a massive plus and Pat Dobbs being up is no bad thing either (solid record when riding for Hannon here; most rides vastly under-bet). It won't be an easy race to win, with some potential improver's from top stables lining up, but this colt has more to offer the game yet and will be much happier in this contest than he was last twice. If all goes well, then he should go well and hopefully justify medium sized stakes. Fadhaa is a danger if back to his best.