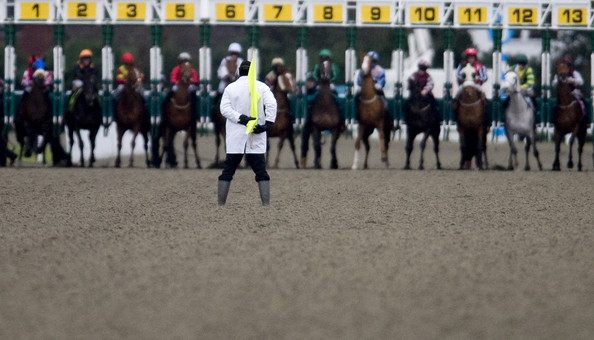 Merchant Of Medici needs nice ground, at worst, to be seen at his best and the rain coming at Pontefract ruined any chance that he had, as conditions ended up being very testing. That made it impossible for the vast majority of horses to get into the equation from off the pace and he missed the kick, which made it an uphill task from the offset. Given how conditions went, he wouldn't have won regardless of how it panned out and although it may not seem like it now, it's better than he didn't run an overly good race as we'll get the chance to back him again soon at nice prices. He must have good ground, the quicker the better, and will be winning a race before too long, now that he's able to run in these Class 5 events. It's annoying to back a loser but he is one to keep on side and I am even more certain that his winning turn is on the way.

More modest turf races today but one of our past selections lines up on the all-weather at Kempton, in a decent race, and looks worthy of a bet at the prices. He'll have a short-priced favourite to turn over if he is to leave victorious but he's capable if the race pans out as I hope and will hopefully do so. Best of luck with today folks and roll on the better stuff, because this racing is tedious and boring to say the very least.

Opposing the odds-on Ibtahaj may look like a bad idea after the event but for now, he looks underpriced to say the least and taking him on is the right thing to do as a result. Prince Of Burma is a horse that I have long thought a bit about and Jeremy Gask's 4-year-old colt should not be such a big price now that he is back on the all-weather off a decent looking mark. This also represents a drop in grade, having had his last six outings in C3 company (only ran one below-par race) and that's a sure-fire help. We backed him last time out, when he raced on quick ground at Haydock and although he could only come home in sixth place, it represented a fine performance in a race that I did not believe to be run to suit him. The way that he travelled throughout was eye-catching (traded at evens mid-run), but he proved to be one-paced under pressure and an all round stronger gallop would have helped. Today, he should get that gallop with both old-timer Megalala and the favourite Ibtahaj being go-forward types who will ensure that there will be no hanging about. That will undoubtedly suit our selection, as it did when he got a good pace to run at when landing a C&D handicap off 75 in January (followed up readily off 81 at Lingfield next time out). He also ran well on his other 2012 visit to the track, when coming a fast-finishing fourth off a 3lb higher mark (in a better race) back in March. That race wasn't run to suit, with the pace being modest and he could only get motoring in the closing stages, which proved to be too late over a trip that's simply too short for him. It at least proves that he can run right up to his best around here and if getting a nice toe into the equation, as is likely, he should be up to running a big race. The game is all about value and Ibtahaj offers absolutely none under his penalty for winning here a week ago (he was impressive, admittedly), so I must take him on. Jeremy Gask's headstrong runner is the one to do it with and Ian Mongan being back in the plate is another big positive, as he's a rare booking for the yard but has ridden this fellow to victory twice from five tries. He's a brilliant jockey and will have a good spin on the horse that should be the second favourite.