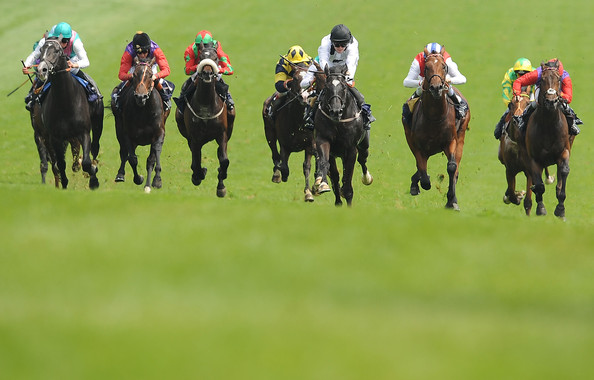 The ground softening up at Chester put paid to the chances of Kyllachy Star, who doesn't mind a bit of cut but certainly doesn't want it so testing. The race also wasn't run to suit him, with a stop-start gallop being the opposite to ideal and I thought that he ran really well to end up beaten by less than 3-lengths. It's quite clear that he's a difficult horse to win with nowadays but he will always be of interest around Chester and his winning turn is not far away. This was a solid run and I've got absolutely no complaints for a change.

Tariq Too proved what a classy, improving handicapper he is by winning at Doncaster under a rather fine ride from Harry Bentley, who is excellent value for his claim. The pair travelled menacingly well throughout and although Amy Weaver's charge took a while to pick up after he was let down, he eventually prevailed in an exciting finish, getting the better of the giant Godolphin trained Scarf, who could be really interesting in the Wokingham at Royal Ascot if the ground came up on the soft side. This was a cracking performance in my opinion, with the pair well clear of the rest of the field and it's nice to get off the ice-cold list as well.

As usual, there was one that got away and that was Anatolian, who bounced back to form with a brilliant second. He also travelled brilliantly throughout and looked likely to win coming into the final furlong, only to be outstayed by the fairly useful looking winner. Frankie Dettori looked as weak as water in the finish, but maybe I'm being overly harsh there. He certainly doesn't look like the same rider to me anyway and this animal really should have added to his brilliant record on the July course. With the pair being 5-lengths clear of the rest, the handicapper is going to hit the runner-up quite hard as well and the cat is truly out of the bag, meaning that we're unlikely to get a value price about him any time soon. Heart = broken, again.

More modest racing today and it's probably one that we should be sitting out. Though, I have managed to find one runner that's worth taking a chance on at the current prices and hopefully he could oblige. He's a tricky animal all the same and it wouldn't be surprising to see him run well below his mark, but it wouldn't be surprising to see him win a shade cosily and that makes it a risk worth taking. The market will tell us more and if he's strong in it, we've a chance. If he's not, there's a sizeable chance that he will be a non-trier and won't be on the job until another day, as he's got the profile of one that's being lined up for a punt and his connections like to have one as well. He's got a chance though and fingers crossed. Best of luck.

Favourites have emerged victorious in the last few running's of this race but I am keen to take on the one for today's race, even though she could be a handicap blot. However, 6/4 about a filly who is having her fifth run in as many weeks is not remotely appealing and she's also up in grade carrying a penalty for her latest success, leading me to believe that she has plenty on her plate. Chookie Royale is the one to keep on side at the current prices and it wouldn't be remotely surprising to see him perform well enough to win this, especially if the first-time hood has the desired effect. The hood is replacing a pair of cheekpieces, which were worn on the last four outings that this 4-year-old had, the first two of which came last year and led to a couple of fine performances, including one where he beat a progressive sort in cosy fashion on the all-weather. He's just 3lbs higher today and although back down to 6f, I feel that a stiff test at this trip is what he's in need of and he gets that here, where he won his maiden (over C&D). There will have to be a strong gallop from the off if he's to be seen at his very best, but that's a possible and will hopefully come to fruition. The main reason for his price is that he didn't post overly impressive figures on his two outings this year, with the first one being an atrocious attempt (was very weak in the market). I think that his most recent run was encouraging though, as he travelled nicely for a long way over 7f at Newcastle in a contest that didn't really pan out to suit. He stuck to the task quite well also and is likely to have improved further for having had the run. Paul Mulrennan being booked to ride for Keith Dalgleish is an interesting one, due to his very impressive record when riding for the yard and hopefully it's a solid indicator as to their horses chance. He's not a winner waiting to happen or anything and this will not be an easy task at all, but he is weighted to get competitive and is quite simply too big at the current prices. The market will tell us more..