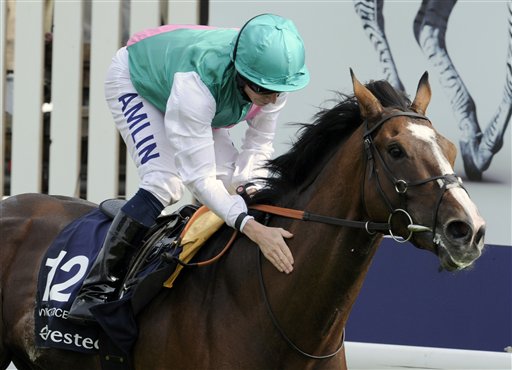 Piazza San Pietro didn't travel through his race as I had hoped but he was picking up nicely at the furlong marker, at which point he was badly hampered and that ended all chance he had of running a good race. There wasn't a hope in hell of him catching the winner, but I think that he would have finished 3rd at least and anybody who plays the selections each-way can feel a bit aggrieved. From a personal point of view, I prefer to see them run good races without it being too obvious as that leads to them being nice prices in their next engagements and that helps if they're deemed a worthwhile bet. This fellow is one to follow and will be up to winning a nice handicap before too long. The race that he contested here didn't really pan out for him in any regard and the bare form is rather deceptive, because he done a lot better than his finishing position would suggest. Again, we got the right race as York Glory ended up running below-par, failing to justify his position at the head of the market and it's as clear as day that this animal needs to go 5f and no more. Keep an eye on him as well, because he's capable of bolting up over the minimum trip off his mark.

Two selections for today, both of which come in really tricky handicaps and we'll need some luck to grab a winner. However, they are both handicapped to win their contests if getting the breaks and are up to going well at the very least. Hopefully one could oblige and have a good day. It'd be nice to nail one before Ascot.

There will eventually come a day when everything falls together for the frustrating Racy, who remains an ultra-talented animal with just a solitary maiden win to his name and is yet to score in thirteen attempts since joining the Kevin Ryan stable at the beginning of last season. There is nothing wrong with this 5-year-old's attitude though and he has been rather unlucky on a number of occasions, getting beaten by less than a half-length in 0-105 handicaps no fewer than three times throughout 2011. Things have not exactly went his way this season either, as he has run really well on his last couple of outings but again came up a couple of lengths short, the latest in the Scottish Sprint Cup over this 5f trip at Musselburgh. We supported him that day and unfortunately for us, the worries about a modest draw hindering his chances came to fruition and he never could force his way to the front, despite his best efforts. It was encouraging though and he was smashed in the betting, which is always interesting given the yard he comes from. It seems as if he's in as good form as ever and off of a rating of 93, he can get his head in front before too long. Today, he drops back to C3 level for just the second time since he's been with this yard (only other run came on this seasons debut; needed the run/ground too soft/track too stiff!). He will almost certainly get a race run to suit as well, with so many speed merchants in opposition and hopefully that will lead to Phillip Makin (back on board after Amy Ryan taking the ride last time out) being able to drop him in rather than sending him off up top without cover as he did on his penultimate run, which came over C&D (ran very well, as he always does at this track). The ground won't hinder his chances and the draw shouldn't either, although we won't know more until race-time given the usual biases that pop up in these big-field sprints. With so many rivals in opposition, it certainly won't be an easy task but he's a class above most of these if on song and I'd mark him up as the clear favourite for this. Medium sized win stakes should be played and if he didn't run well at least, I will be very disappointed. Hopefully this will be handicap win #1.

Quite an interesting race in which chances can be given to many, but White Frost looks the liveliest at the prices and should be up to putting in a bold performance if all is well. This Charles Hills trained 4-year-old colt was ultra-progressive last year, winning his first three outings (a maiden and two handicaps; 80 & 86) before running really well during the following three outings, although failing to trouble the judge on each of those. They were all very encouraging runs and led to him being sent off as a 10/1 shot in the 24-runner Victoria Cup at Ascot last month, which was his seasonal debut. In the end, he finished well behind the main pack and just failed to fire, possibly needing the run more than connections had expected. It's also likely that the very soft ground at Ascot just didn't suit him in a race of that nature (certainly didn't travel with his usual impressive fluency) and he should be much happier back over today's better conditions. Going back around a bend is something that I think he will enjoy as well, especially as there should be a decent pace on from the off and if readied to play a part, there are no obvious excuses for him. Connections have also seen fit to acquire the services of Ryan Moore to hop on board for the first time and that's interesting to say the least. There certainly aren't too many stronger men in the saddle and seeing as White Frost is a bit sheepish in a finish, Moore should prove to be an ideal partner. Charles Hills also makes a 400-mile round-trip in order to run just this fellow, and it might be with the intention of getting a penalty for winning the race as the horse still holds an entry for the Royal Hunt Cup at Ascot next week, in which he won't get in off his current mark. Whether that's the case or not is beyond me but the horse is a bet at this price and should be up to running well. It certainly won't be easy given how many horses are in opposition but he will have come on for that run last month and is given the chance to drop in grade due to the handicapper easing him by 2lbs to a mark of 90, which is very exploitable. The usual stakes will apply and hopefully the market speaks positively, as that would be very encouraging. Also, hopefully Fast Shot will run well, as I've got a small stake in him! I'm not sure about the trip for him when running around a bend and his position in stall 18 makes things close to impossible. A decent showing would be nice, before going back over 6f.