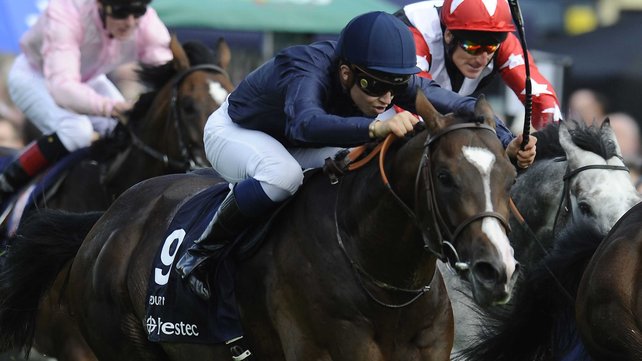 I expected rain at York, but was hoping that it wasn't going to change the ground so drastically. Sadly, it did and that ended up putting paid to our chances by making the usually bias filled track even more laden with bias, and you weren't going to get away with being badly positioned. Racy wasn't terribly positioned if you take into account where the winner came from but that animal has so much speed and could match those running down the middle, who held a massive advantage throughout. Our selection just couldn't show his usual early speed and ended up fading out of the equation, which is understandable given how the track was riding. It was a very, very disappointing effort but I would not judge him too harshly on it, as you really need the rub of the green (a lot of it!) in order to land these big-field sprints and he just didn't get that here. He also needs better ground, so returning to that will help. I wouldn't mind seeing him back over 6f either.

We got on board the White Frost train at the right time, as he was smashed off the board, eventually going off as a 5/1 shot. Annoyingly for us, the ground had went wrong for him and Ryan Moore also brought him to the wrong part of the track in order to make his challenge, but his goose was cooked before anyway, as he was never in with a chance of getting a nice racing position. That was costly, and those on the speed dominated the race, where I was hoping he'd be positioned, as he usually is. As with the earlier selection, there's little point in taking this run literally and he remains a horse to keep on side, one that should be up to winning again before too long, hopefully when we're on board. It's quite disheartening, but that's racing.

Quite a boring Saturday in prospect, with plenty of racing but the majority of it being modest or impossible to view as a betting medium. I've found a couple of selections that are worth our cash, though with the way that I'm picking them at the moment they're probably not. We are due plenty of luck, bang on time for Royal Ascot and hopefully it could begin here with a winner. They should run quite well, if getting the breaks and fingers crossed that they will. Have a good day folks and roll on Tuesday, it should be fun. It's an awful pity that the ground is spoiling everything though, because it massively increases the amount of good fortune that you need to win a few quid, with notorious track/pace biases popping up - as seen at York yesterday.

Not too many horses who are obviously well-treated line up for this 1m 1f contest and you could probably give chances to the majority of the field. However, it does look as if York is favouring those who are on the pace throughout and hopefully the case again here, as Halfsin should prove to be a lively candidate if it is. Marco Botti's 4-year-old was very progressive throughout last year, winning a maiden before landing two handicaps off 83 & 88, the latter impressively against a horse who has turned out to be very useful. Since the turn of the year, he hasn't exactly pulled many trees but I thought that he ran exceptionally well for the majority of the City & Suburban Handicap at Epsom, where he eventually finished in 6th having weakened badly inside the final furlong (had them all working 2f out). The fact that he stuck to the inside rail did not help him in my opinion and having kicked for home a fair way out, it's no surprise that he weakened out of the equation on ground that was heavy, at least. Today's ground isn't ideal, but it won't be as bad as it was at Epsom and he should enjoy this track even more, with the possible pace-bias being a big help. A mark of 97 makes things tough, but if everything falls right then I'm sure that he can defy it. He should also have improved in the fitness department for having had a couple of runs this season, the last of which came at Listed level and he performed as well as could be expected given the weights. This is easier and with Mickael Barzalona booked for the first time, a big run could be on the cards. The usual stakes apply.

Some interesting types line up in an attempt to win what is a very decent prize and Sam Sharp might well be the answer to this tricky equation. Ian Williams' 6-year-old has looked an improved animal in his pair of outings so far this season, finishing 2nd on both occasions and he was rather unlucky to do so. The first of those, which came after a long break since failing to run well over hurdles, ended in a half-length defeat over today's C&D when tackling similarly testing conditions. It was quite simply a case of hitting the front too soon, as he didn't do anything from there on in (hit 1.01) and let the eventual winner take advantage. It was good to see that he has no issues with this type of ground though and seeing as it was his first run since December, he would be expected to come on from it. Indeed, he did exactly that when lining up four weeks later over a mile at Newbury, where he was again unlucky and probably would have won if it wasn't for being denied a clear run in the dying stages. He was flying all the way to the line under Jamie Spencer, in a race that he was strongly supported for and he yet again showed his current well-being, this time on much quicker ground. The handicapper has just put him up a pound and although this is a tougher race, he's likely to get one that's run to suit (last race was run to hinder him) and hopefully that will lead to what would be a well deserved win. Backing any Ian Williams trained runner makes me feel a bit ill, as it's near impossible to tell when they're going to be "on the job" so to speak. There's over £21,000 for the winner of this race though and it looks very winnable, so hopefully that will ensure that the horse will be trying. The booking of Royston Ffrench to ride for the first time is a strange one and not overly awe-inspiring, but he's picking up some decent rides for the first time in an age and should be riding with a bit of confidence at least. Overall, this won't be an easy race to win but the horse is capable of doing so if a few things fall his way and like us, he's surely due a bit of luck. Now we just need to see the market speak in our favour...