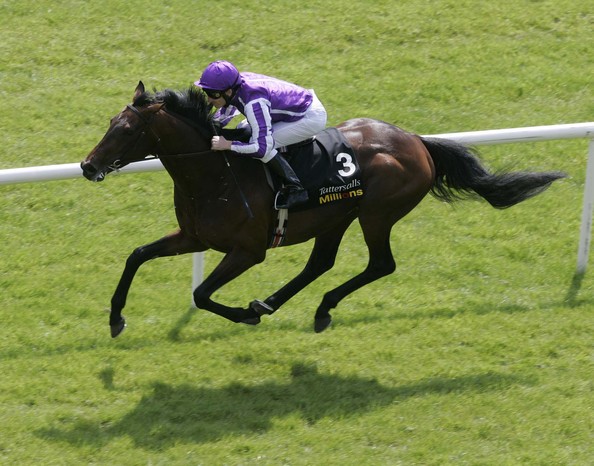 The ground quickening up at Salisbury on Sunday was in Gosbeck's favour and she also got a race that was run to suit, which leaves the end result as being nothing short of disappointing. She's not an animal that I expect to see coming there swinging off the bridle but she came off it a lot earlier that I hoped here and didn't stay on as powerfully as she can. It's possible that this run was also needed, due to it being on the back of another short lay-off and it'd be wise not to give up on her solely based on it. She's a lot better than that and has the ability, in my opinion, to sluice in off her current mark at some point, hopefully soon.

Summerinthecity was easy to back but ran very well before tiring inside the final furlong, possibly down to using up his energy too early in order to work into contention. I thought that he was going to go very close during the run, as he made good headway coming into the closing stages and is the sort who can finish off his races very well, but he didn't on this occasion and understandably so. He has got a race in him off his current rating and will take advantage when the cards fall right. He just wasn't good enough this time.

Now begins what will be a hectic week of punting for us and hopefully it won't all end in tears, depression and many more bad things. We can do little but try though and a bit of luck wouldn't go astray. For day one, I've found four that are worthy of support and fingers crossed that one of them could pop up. Have a good day folks and the very best of luck with whatever you're picking out yourself. It won't be easy, but I suppose it never is and at least this time the right horses will come to the fore, and there won't be many non-triers!

I don't think there's much point in searching for a giant priced winner of this speed testing contest and the market leaders are fancied to come out on top. Wizz Kid is the one that catches the eye, despite being a lot shorter now than she was when the market was first formed. However, we now know that this French trained 4-year-old filly will have plenty in her favour, with the draw seeing her positioned close to a lot of speed and that's a sure-fire positive, as she needs a nice pull into her races. Trends are something that I rarely pay a whole lot of attention to but each of the last 7 winners of this race finished in the top 2 last time out and that statistic is in our favour, with this filly coming here on the back of an impressive G2 victory over in France a couple of weeks ago. She is yet to win at the highest level but was unlucky both times that she has run in Group 1's and is clearly capable of winning one before too long. A stiff 5f suits her perfectly, as will the ground unless it quickens up somewhat and she's got course form to her name, having finished second to Deacon Blues in the British Champion Sprint here last October. That was over 6f and I think that she's better granted a proper 5f pace to run after, though her reliance on luck in-running increases a lot at this trip given that she needs to be waited with. Further improvement is something that's likely, as she's a lightly-raced animal with just 10 outings to her name and quite a lot of sprinters improve for experience. A few things worry me, including whether she's drawn on the right side in stall 15 and it's also possible that making inroads into the pace won't be easy, but she is a class act and remains worthy of support at the prices. Medium sized stakes should be played and I'd be a bit surprised if she does not run well at least.

There's no doubting that Hermival was disappointing over in Ireland when contesting the 2000 Guineas but he returned home as a sore horse and putting a line through that effort might be the right thing to do. Previous to that, this also French trained 3-year-old finished a gallant third to the brilliant Camelot in the English equivalent, beaten by just over a couple of lengths. In all reality, he was massively favoured due to racing on better ground, but he was racing in a smaller group of horses (four) and wasn't getting a lot of cover as a result. He travelled sweetly though and also quickened well, despite not overly handling the undulations of Newmarket and won his mini-race cosily enough. If he was coming into this race on the back of that performance, then he'd be a lot shorter than his current price and as far as I'm concerned, the Curragh run never happened. Obviously he will have to be over that issue in order to give best here but his trainer seems confident that he is and I'll have to take his word on that. It's clear that this four-times raced colt is top-notch and if he's coming into this at 100%, a good run would be the least we can expect. How he will handle going around a bend for the first time is beyond me, but there's hope in his breeding as to how he'll handle Ascot, as he's a son of the excellent Dubawi and he has a 22% strike-rate here in recent seasons, with 4 winners from 15 runners in 3-year-old stakes races (though Makfi twice flopped here at the same age; his only career defeats). This race has been extremely good for favourite backers in recent seasons, with only one of the last seven getting defeated but I don't think that Power represents any sort of value at his current price and he must be opposed, despite Ladbrokes giving out solid vibes by having him priced up shorter than anywhere else. Fencing also interests me but I was hoping he'd get quicker ground, though stepping back to a mile is a massive positive and he's going to make up into a cracking animal. The jockey bookings on Gosden's trio of runners has me confused at the same time, so I' will be hoping to see him beat. Mikel Delzangles' charge is the one to be on at the prices and should have a say.

I'm very hesitant to back anything in the juvenile division, especially when there's over 20 runners lining up and added to that is the fact that this is usually a favourite's race, one in which each of the last 10 winners were victorious on their previous racecourse outing. New Pearl will have to smash that trend into pieces if he's to give David Brown another lucrative Royal Ascot juvenile winner, having guided Frederick Engles to an impressive victory in the Windsor Castle last year. Brown has gone on record to say that his runner in today's race is every bit as good as that one and that's high praise indeed. It would look like a rather mad statement if judging this fellow solely on his most recent outing, because he was beaten a length-and-a-half in a 3-runner conditions race at Pontefract, getting turned over at odds of 1/6 and leaving his hopeful connections nothing short of shocked. I'm not really sure how you can excuse the defeat, but it is possible that he found the quick ground too much at what isn't the most conventional track out there. Previously, on his only other start, he looked very impressive when running away with a 5f Newmarket maiden. He was really well away from the gates that day, showing plenty of early speed before drawing away in impressive fashion once encountering the uphill finish and although it wasn't much of a race, he looked to be a real stand-out performer, one that could potentially pull some trees in stakes races. The way he motored away from his rivals that day suggests that 6f is going to be his early trip - despite disappointing over it last time out - and with a potentially useful draw in 20, he could be hard to peg back if persisting with front-running tactics. The excellent Johnny Murtagh being on board is a positive to any animal and it wouldn't be much of a surprise to see this potentially very useful colt bounce back with a better performance. Whether he's quite good enough to take a race of this nature is something that I'm not sure of, but he should give it a good shot and is worthy of minimal win stakes at the current prices. Cristoforo Colombo would have been worthy of a bet at around 6's if it wasn't for the draw scaring me off. He'll make up into a really good horse.

The National Hunt horses are out in force in an attempt to enhance their solid record in this race down the years but it's one of the regular Flat horses that I am siding with. Cosimo De Medici is the one in question and Hughie Morrison's charge looks the just type to find even more improvement as a 5-year-old. He was a very good performer throughout last year, winning a trio of handicaps off marks of 76, 79 & 84, the latter in very taking fashion over 2m 2f at Newmarket. If he's coming into this race in similar form then he should be running a big race despite his higher mark of 89, as he moved wonderfully throughout before asserting impressively to beat a horse who has progressed a hell of a lot since and overall it was just a rock-solid performance. He bombed out on his next and final start of 2011, in the Cesarewitch, but had a tricky draw that day and it's a forgiveable effort. The ground when he won at Newmarket was on the fast side but he's by no means ground dependant and seems to handle pretty much everything. This course would be the main concern, as he may need a longer home straight in order to hit top gear but I'm hoping that Darryll Holland will be wise enough to get him motoring earlier than usual, although it's not like he will not have enough time to get into position in a race that's 2m 4f. Still, if he's waited with until they're turning for home then it will be game over, that's a sure-fire certainty and jockeys do some crazy things. He will, at least, be coming to Ascot in tip-top shape, having had a really encouraging reappearance run at Goodwood a few weeks ago, when running over 1m 4f. For a horse who stays as well as this one does, that trip was never going to suit, never mind when he's being keen at such a sharp track. As a result, his 5-length 4th of 9 in what was a top-notch handicap reads very well and Hughie will have left plenty to work with. That should also have taken the fizz out of him somewhat and he should not be as keen as he was there, which will give him a much better chance of seeing out the trip. One thing that he does is stay all day and that's as good an asset as you can have in a race like this, but he will require a lot of luck in order to win from the rear should those tactics be used again (they usually are). His price is decent enough to have a play on at least and he should go well. Elyaadi and Twin Soul were the other runners that interested me at the odds.