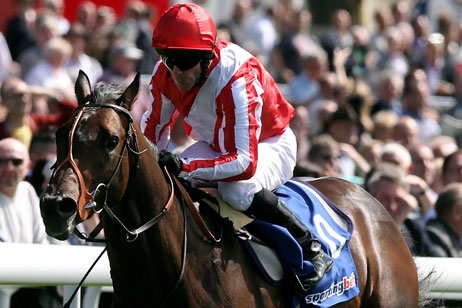 King Of Eden produced a much more encouraging performance yesterday, one that saw him finish in third place. There are no massive excuses for the defeat, as he finished 5-lengths behind the winner but I don't think that Paul Mulrennan gave him a good ride and I have a sneaky suspicion that there will be other days planned for him. This was much more like it though and hopefully we will catch him on a going day soon.

We got a nice price about First Post, who was fairly strong in the market, and it's just a pity that the contest was run at a crawl. This caused our quirky selection to over-race throughout, and it's very hard to get away with that in a race that will to turn into a sprint for home. Surprisingly, he was still travelling nicely with just over a couple to run, at which point the race had turned into a dash. Unfortunately for us, he just failed to quicken when asked and only began to charge at those ahead of him within the final furlong or so, which was too late. The race-pace being too slow for him was so costly and although it hindered the chance of a few others in the field as well, it would have got interesting for us if it was indeed run to suit. This one will be up to winning a nice handicap during the season and I can't help but feel that another has gotten away.

Yesterday brought an end to what was a cracking month, despite some silly mistakes on my part, and we got a total of 7 winners throughout May (5/1, 11/2, 6/1, 6/1, 11/1, 12/1, 16/1). At the same time, it could have been so much better with a couple getting done on the line, and they were both 12/1 shots. Then there's my mentioning of Nomoreblondes, who I stupidly left alone and watched go in at 22/1, and then follow up next time out at 16/1! Crackentorp was another that went so close, at 20/1 and the day that I finally left the talented Oriental Scot alone (to back a 12/1 shot that traded evens), he bloody won at a decent price! You couldn't make up the stuff that we have to put up with in this game but all in all, it was an enjoyable one.

Now it's time to kick on and achieve some good profits throughout June, which was by far my best last year. Unfortunately it's starting at Epsom, a notoriously tricky track and one that I can't say I enjoy punting at. It's made even worse by the fact that the only two races that I can advise a selection in today are ultra-competitive handicaps, in which we will require plenty of luck to find a winner. I think that I've managed to find a couple of lively ones though, both of whom are vastly overpriced, and hopefully they will prove up to the task. Value is very hard to come by in the pattern races more often than not, in my opinion, and there's nothing standing out in any of today's - there isn't in The Derby either. We'll stick to the handicaps and hope for the best. After all, we only need a few winners every month at the prices we play in order for it to be a decent one and after that, everything's a bonus. I'm feeling ultra-confident as well, so the next few months should be enjoyable - though there will be plenty of ups and downs I'm sure! Have a good day.

Quite an interesting race with some very interesting contenders, thus making it difficult to decide who is the best bet at the prices. The one that we should on side is Borug, a Godolphin cast-off who does look attractively handicapped off a mark of 82. This now James Tate trained 4-year-old has lined out on a trio of occasions this season and ran decently each time, which leaves me wondering why the handicapper has dropped him a few lbs. Every little helps though and the horse gets to line up in this competitive handicap with a nice racing weight of 8-6, with Kieren Fallon doing his minimum to hop on board for the first time (3-16 for yard; 2-13 for owner). I have my doubts about whether Epsom will suit him fully but he ran quite well over C&D a year ago when finishing second, albeit a 3½-length second, to the Group-class Slumber. The ground should at least see him perform to best effect and interestingly his previously regular cheekpieces are back in operation for the first time this season, which looks a solid indicator that the horse is fancied to run a big race. His most recent runs all came in easier races than this, but he's up to performing well in high-class handicaps off this sort of rating and comes here on the back of an encouraging run over this trip at Newmarket, where things did not really pan out for him. If they do here, and he gets a solid pace to run at, then he should be seen finishing off his race quite well under the Fallon drive. Odds of around the 12/1 mark are on the generous side and he should run well. Cry Fury and Pivotman were also of interest.

Being drawn out in stall 16 is hardly an ideal position for Kay Gee Be, but the pace is likely to be a solid one in this big-field handicap and that will give him a chance of overcoming it. This race is usually taken by an improving sort, but all of those that fit the bill this time around are just too short in the betting for my liking and it's worth our while taking a chance on Richard Fahey's 8-year-old, who still has plenty to offer the game despite his age. Looking through his form last year wouldn't exactly get the juices flowing, but the vast majority of his form over a mile was quite good and he clearly has the ability to play a hand in big handicaps. I thought that he ran a cracker at Thirk last time out, in the Hunt Cup, when hit with a similarly poor draw. That caused him to sit wider throughout than is ideal and although the form says he was over 8-lengths behind the winner in fourth, that winner is up to plying his trade in Group races, quite evidently (won by 6-lengths off a mark of 100). The ground being good-to-soft on that occasion was far from ideal for a horse who loves genuinely quick conditions and I would mark that run quite a lot. Returning to this sort of ground will be a massive help and although the draw hasn't done him any favours, he is at least likely to get a race run to suit. The more worrying thing is that Tony Hamilton is on board and he has little to no experience of this tricky track, which would usually be enough to put me completely off of a potential selection. Hamilton has won on this animal before though, and is a decent enough jockey, so I think that it is worth taking a punt seeing as the horse is a big price. He's not the most obvious winner out there, but can play a hand in this off a mark of 87 and is certainly underestimated at 16/1. The usual stakes will do.