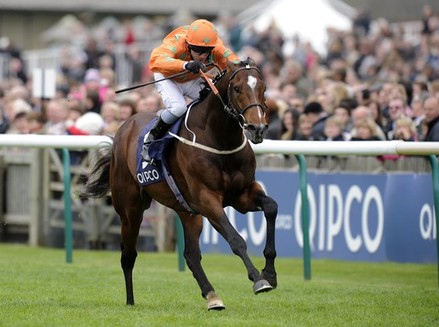 Sirvino ran a solid race yesterday, beaten by just over three-lengths and would have finished closer to the main protagonists if he wasn't held up so far back by Richard Hughes. I was hoping that he'd be running in a similar position to where the Varian horse was, as he doesn't have that instant turn of boot to be seen to best effect when trying to make up ground coming into a short home-straight and ultimately, that was costly. A lack of a good position also forced Hughes to wait for a run in the straight, which is even more of an inconvenience and it just wasn't to be today. I stand by my claims that he is better than ever though and can win off this mark before too long, possibly going back around York if getting his favoured soft ground.

Decent Fella again ran a stormer in the Buckingham Palace, eventually coming home in fifth place and it would have been a better result if he didn't get worried out of the equation when the favourite was edging badly off to his left late-on, causing Balding's charge to go off a true line. It made absolutely no difference in terms of winning as the winner, who raced on the far side, was clearly a class above on the day and it would have taken a mammoth performance to beat him. It was a really good run from our selection and although he's very unlikely to improve for the run given his preference for running when fresh, he's one to keep an eye on if given enough time between now and his next outing (has a C&D entry in four weeks).

God knows when this current awful form will end, but I'm strangely confident that I'm putting up the right horses at the moment and everything will, eventually, return to how it was for the first five months of the year. It's obviously tough when everything's going arse-ways and all of our accounts are taking a hit, but I'm in this for the very long haul and we'll keep with the tried and tested methods that have got me through the past few years, which have seen numerous losing runs quite similar to this. We will be winning again, before too long I hope, and thanks to everyone for the very encouraging messages. People of sheer class.

For today, we go handicap-hunting again at Royal Ascot and I think that I've found a pair of lively runners, though I've been thinking that for the past month. Hopefully one of them could do us a massive favour by winning and the second one is particularly capable if he's on form here. I haven't a clue anyway but they're too big in the market and should be backed. The fingers are well and truly crossed. Best of luck everyone.

Considering the size of the field, there's a shocking lack of true pace and that makes things difficult from the off, even though they should be taken along at a decent clip regardless. The trends again suggest that you must side with younger, unexposed types, with 9 of the last 10 winners being either 4 or 5. I don't like any of the runners who fit that bill though and Mac's Power looks worthy of taking another chance on at the prices, in a bid to give James Fanshawe back-to-back victories in this ultra-competitive handicap. He took this last year with the impressive handicapper turned Group horse Deacon Blues when that one was rated 98 and today's runner lines up off the same rating. Indeed, he ran one of his best ever races to win the stands' side race in this contest last year, when rated 100, and would surely have troubled his classy stablemate if racing on the same side as him. After that, he ran a great race to finish third in a solid C&D handicap a few weeks later and then repeated the trick by coming home in the same position, unluckily, in the Stewards' Cup at Goodwood. Loads of his form simply suggests that despite being more exposed than a lot of runners that you'd want to side with in a race of this nature, he can get competitive when he is readied and his masterful trainer is sure to have him at full-tilt for this. He comes into this on the back of a solid third at Newbury last month, in which he didn't have much luck (again) but shaped far better than he did on his seasonal debut when disappointing in a small-field conditions event at Warwick. I've no doubt in my mind that each of those runs were just preps for this and at least he should be peaking at the very right time. The problem again could come from the draw, as he's running from the highest one of all (31) and whether that is a positive or negative in this field is beyond me. At the same time, being alongside the rail is no harm and taking a chance that it will suit looks justified. Kieren Fallon being in the driving seat is certainly no bad thing either and he has an excellent 20-100 record when riding for the yard. Undoubtedly the reason he's been on board for each of the horses runs this season has been to familiarise himself with the animal before their tilt at this race and that's encouraging. With a bit of luck, a pace to aim at and no issues conspiring against him from the draw should all see him get the chance to run his race and at his best, that'd be enough to see him go close. 12/1 is a nice price and the usual stakes should be used.

Joe Fanning seemingly had the choice between the Mark Johnston trained trio and I've got no idea why he hasn't decided to ride the talented Ithoughtitwasover, who looks like a tough, improving 4-year-old with more to give the game despite his now lofty rating of 102. Johnny Murtagh ain't a half-bad replacement at the same time and this will be his first Royal Ascot ride for the yard in 8 years, one that I think holds rather outstanding claims if not bogged down by the soft going. He shouldn't be, having gained both of his wins this season on good-to-soft ground, though there is a lingering worry that he could repeat his Epsom run which saw him bomb out completely in very testing conditions. It may have been the track that did him on that occasion and hopefully that proves to be the case. He has been a very busy horse this season, as is usually the case with Johnston's runners, and comes here having run no fewer than six times since the middle of April. The best of those outings came in the space of less than a couple of weeks last month, when first winning a big-field Newmarket handicap (91) a shade cosily before heading off to Hamilton to contest the Listed Braveheart Handicap (94), which he won even easier, but it was just a small-field event. After those runs and another solid place at Goodwood on quick ground, the handicapper rose him to 102 and he then attempted to win a valuable contest at Newmarket, though on the July course this time. I'm not sure whether connections would have wanted him to win that, as he wouldn't have got into this race had he done so and they've been talking about it for a while now. All the same, he did run a cracking race despite getting shuffled back early on and even came with what looked to be a very good attempt coming into the closing stages, only to see his effort understandably flatten after using up far too much energy just to work back into contention. That is the run that gives me most hope as to his mark being workable and hopefully he won't have such in-running issues this time around. It's a bet that comes with a lot of risk though, as he will need to be prominent throughout. If he's not and comes into the straight with plenty of lengths to make up, then it was certainly be game over (doesn't have the right attributes to be held up at a course like this). He is a usual prominent racer though and Johnston will know exactly what to do with him, having won the race three times since the turn of the century (inc. two of the last three). I think that he has a very overpriced runner this time around, one who should be up to running very well at least and after that, who knows. He also goes really well at the track, having finished second here twice (should have won both) and had an ocean of excuses on the only other occasion that he ran around here. It certainly won't be easy but with the genius that is Johnny Murtagh on board, a good draw to get well-positioned from and a race that is likely to be run to suit, we should be getting a good run for our money at the least. Knowing what Johnston's runners can do is worrying (along with my own "judgement" currently) and it wouldn't be a shock if he bombed out completely, but he is a very talented animal and most importantly, is underrated in the market at the current odds. Medium sized win stakes should be played; here's hoping.