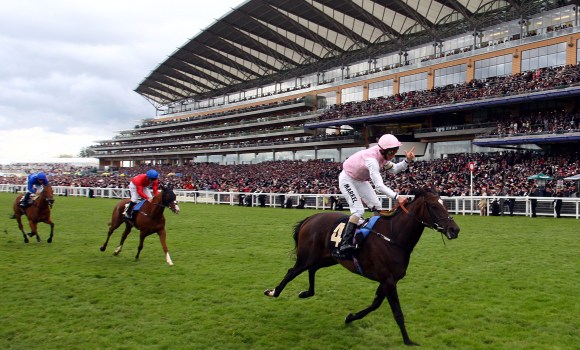 Bless You never showed up at Folkestone on Thursday and looked nothing like the filly that I was hoping to see. It didn't really matter anyway, as she wouldn't have troubled the leading two given the fact that they were well-drawn and she wasn't, so at least we'll be able to get a price about her again due to this poor run. Henry Candy stated before the race that she's quirky and wasn't sure to be suited by the ground, so maybe she's one to bear in mind when it's not as fast underfoot. I get the impression that she would be better running around a bend as well and it'll be interesting to see where she goes next. This was a very poor run, but isn't reflective of her ability and it may have been that too much was against her to run well.

June is testament to how I could stop a train at the moment but we're getting some fast ground at some of the flat meets today and that's good to see. I'm leaving Newcastle alone because of the ground and also none of the races are of real interest to me, though hopefully my fellow Fast Shot will run a big race. With my luck of late, he will, as I'm not backing him (don't want to be a jinx!). He should love the ground though, won't have an issue with the track and seems well-drawn. It's a horribly tough race at the same time, but I wouldn't put anyone off having a few bob on him at fancy prices. There will be four "official" bets, coming at Newmarket and Windsor, all in quite competitive races. No doubt that we'll end this month how we began, but we can do little more than try and I think that they all have fairly attractive claims. I would be absolutely over the moon if we could get just one winner and go towards July with something to work on, as this has been the worst betting period of my life and I look like nothing more than a clueless mug when taking the bare losses in isolation. We'll be back though, I can assure you of that and I'll work crazy hours throughout July to ensure that we will. Again, I can only apologise for the past month but I will make it up to everyone, that's a promise. Anyway, have a good day folks and the very best of luck - it will return. Now, please?!

Fast Shot won, of course. Genuinely - swear on my life and on anything - hadn't a single penny on him.

Backing any Richard Guest trained runner is something that I don't enjoy doing but Barnet Fair is a very useful sprinter and looks likely to put up a bold show in a bid to win this near £19k prize. He has been an unbelievably consistent performer throughout his career, including in some very good races last season. He's got three wins to his name, but just one of those has come on turf (from 12 outings) and definitely deserves to showcase his talents by winning a nice turf handicap. I think that the test he faces here will be right up his street, with the pace likely to be rapid throughout and his typical fast-finishing effort might be enough this time, which usually isn't the case as the line is always coming too soon. Guest's speedball pulled no trees on his seasonal debut in a hot York handicap but could have been expected to be in need of the run and duly stepped up on that when dropped to 5f at Musselburgh for the Scottish Sprint Cup. He was strong in the market that day but had an awful sit in stall 3, which ruined his chance of getting fully competitive. To his credit, he ran a great race to end up being beaten by little more than 2-lengths and it represented a nice return to form. Coming back to 6f on quick ground will suit (was softish last time out) and I think that he'll love it around here when the pace is likely to be frenetic. Declan Cannon also hops on board for the first time and takes off 3lbs, to leave the horse effectively running off a mark of 86. That is an attractive, workable mark if he comes here in tip-top condition and he really should be with those two runs under his belt. The market will tell its own story but the favourite, Pearl Ice, is too short for my liking and is one to oppose. Richard Guest's gelding has more to offer the game yet and is worthy of the usual stakes.

Quite a tricky affair here but Unex El Greco strikes me as the type who's badly in need of a step up in trip and he's getting exactly that now. John Gosden's 4-year-old gelding is often slowly away from the gates but has finished off his last two races in fine style, the latest over the extended 1m trip at Epsom. He was held up towards the rear that day, in a race where it proved very difficult to get into contention from off the pace and the fact that he was able to come a fast-finishing 3rd of 17 is testament to the raw ability that he does possess. It was a similar story on the Rowley course the time before, where he found his stride all too late and was doing his best work at the finish in a race not run to suit, though he wasn't all that badly positioned throughout. To my eye, they're runs that suggest that this 1m 2f trip won't inconvenience him but his sire wouldn't be the biggest stamina influencer that you could find. There's plenty on the damside at the same time and that being combined with his run style makes this look like a trip that he will enjoy running over. His handicap mark of 89 is definitely workable, but the booking of Tony Culhane is rather strange and worrying (can perform the odd "questionable" ride). William Buick cannot ride because he's off to Ireland for a ride in the Derby but why Culhane is up is certainly beyond me (only had one ride for Gosden before; in a maiden in '05, beaten 2-lengths). He is a rather decent pilot when he's "on the job" though and will hopefully be on it today, with a view to getting his mount into some better races. The horse is capable of winning this at least and there's a bit of room for movement on his price, so we'll take a punt on the intentions being favourable today. He should get a race run to suit and will hopefully get involved.

The beautifully bred Borug was one of our recent near-misses, when losing by a half-length to Gatewood at Epsom earlier in the month, possibly a bit unlucky not to win in my bias-filled opinion, and that form is very good to say the least (came over 1m 2f). James Tate's 4-year-old colt has turned out since, just a few days ago when sent off as a 4/1 shot on the all-weather at Kempton, over 1m 4f. Sadly for his supporters, he just refused to settle and then got badly hampered on the rail by a weakening rival with half-a-mile to go, which caused him to drop to the rear of the field. He rallied after that, but could never make much of an impact on those ahead of him and could only post a respectable result in the end. He wouldn't have won regardless of what happened but I'd credit that to his keenness rather than a lack of ability. This contest is much tougher and we have no idea how he'll handle the quick turn around, but he'll love the ground and ran a cracker over a mile here on his first run for connections since leaving Godolphin. A mile really isn't his trip, so to see him run so well in a race that doesn't look to be bad form is very encouraging. That was also off a 2lb higher mark that today's and if his Epsom outing is anything to go by, he will truly relish this extended 1m 3f trip. The fact that he was so keen last time out isn't too good but the run should have got the freshness out of him and if he settles better for Martin Lane, who's on board for the first time, then he should be finishing off his race quite well. This track isn't one bit ideal for the hold-up types, but it looks as if there could be a decent pace on and that would be a big help, though he doesn't seem inconvenienced when races turn into a relative sprint. He's a horse that I really like anyway and he should be winning before too long, so we'll keep him on side for a while when it looks like he'll get enough to suit. He should do so here and is definitely overpriced to get involved in the finish. Also keep an eye on Rock A Doodle Do in the market. He will be winning races this year but I think that this may be in preparation for a later date.

The Godolphin filly could be a class above here if readied but she's running on the back of a long lay-off and the price means that she should be opposed. Diverting is the one that I'm going to side with, as I think that William Jarvis' 4-year-old filly has more to offer off her current rating of 86 and should be seen finishing well at this stiff track. She caught the eye of many people when being unlucky at Sandown last month, having been denied a clear run by the horse that I selected that day. Whether she would have won is guesswork, but she was only beaten 2-lengths in the end and seemed to lose at least that amount of ground/momentum when stopped in her tracks. The race wasn't really run to suit her that day either and overall, it was a cracking effort from this game, consistent and progressive filly. It definitely suggested that her current rating was something that she could take advantage of when the cards fall her way and they may do so here, with the track being likely to suit if all is well. The ground should be exactly as she wants it and Ryan Clark being booked to take off 3lbs suggests that it could be full steam ahead. Two of the 3-year-old's are all that I'd be overly worried about in the "who's well-handicapped" department and if they fail to prove their potential then Jarvis' charge could be the one to take advantage back amongst her own sex. 6/1 is a decent price and the usual stakes should be played. Hopefully career win #5 is achieved.