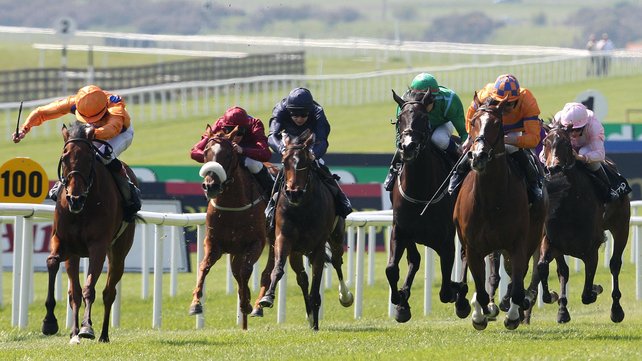 More places to report, but no winners. Racy was so very strong in the market on Saturday, which is always encouraging given the yard that he represents, but he couldn't justify it and only managed 4th place. It was a very good run and it is a pity that the draw was not kinder to him, as it seemed to be a big inconvenience. That elusive handicap win will eventually come around and hopefully we will be on board the money train.

Desert Law relished the speed test that he got in the Epsom Dash and unfortunately for him, the winner relished it even more, forcing him to take the runners-up position. He was a bit unlucky in ways, as he only got beaten by a half-length and had to wait for his run, at which point the winner was setting sail but it may not have made much of a difference. All in all, it was a cracking performance and he's a talented sprinter.

The race that Oceanway contested was run as I had hoped, but she didn't and showed next to nothing. A combination of track and ground may be to blame, although I'm not finding it too easy to excuse this utterly dismal run and she's probably one to avoid in such competitive races. She's better than that, though.

One selection for today. She's a sizeable price, but should be able to outrun the odds and looks capable of winning a race of this nature when the cards fall her way. If they do today, she'll go close. If not, she is likely to show very little but I suppose that's the case with them all! Have a good day folks and hopefully we'll return to the usual winning ways before too long. Losing runs are annoying as hell, but by God have we been unlucky not to land some cracking bets in the last while and there are plenty of positives to be taken from it all. We're backing the right horses more often than not, and that equals long-term success.

Mick Channon can do no wrong at the moment and Fork Handles looks to hold a decent chance of giving him a second victory in this historic handicap. This 4-year-old filly was my selection in last years running of the Oaks, in which she ran no race but was a 40/1 shot at the end of the day. Indeed the whole of her classic season was a wipe-out but that was put down to her having some muscle problems and judging her strongly on that season would be harsh. Previous to that, she was a very useful juvenile when running over trips that I don't believe suited and she was always going to be the type to improve with time. On her return to the track this season she ran a stormer to finish a half-length second in a big 1m 3f handicap at Kempton, her all-weather debut. That came in a steadily run contest, which would not have suited and it goes down as a clear indication that she's a well-handicapped animal off her current rating of 90. It's safe to say that you can ignore her most recent outing, which came on soft ground over a straight mile at Ascot. She will be much happier stepping back to this 1m 2f trip and should equally enjoy the quicker conditions. The flat, galloping nature of the track will also suit and I doubt that connections are making this 500-mile round-trip for the fun of it (their only other runner is in a gutter handicap). Danadana will be hard to beat but he's a laughable price as far as I'm concerned and I'll happily oppose his type without much hesitation. It is hard to know whether I'm on the right one but she's certainly too big at the current price-tag and taking a punt is well worth our time, with the usual stakes being sufficient. Hopefully she'll run a big race, and win!