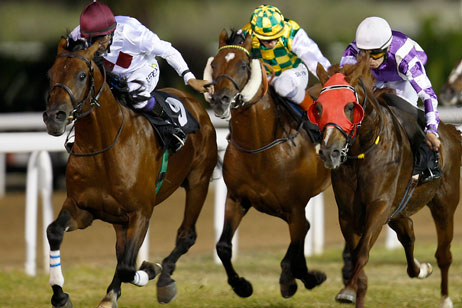 We correctly opposed the short-priced favourite in Parc De Launay's race, but unfortunately I put everyone onto the wrong horse. Tom Tate's quirky 3-year-old just didn't seem to want to know and this was despite the ground coming massively in his favour. The headgear that was applied for the first time may have had the opposite effect, as he was beaten by halfway and even accounting for a potential below-par effort, that was just too bad to be true. I doubt that he would have got near the winner anyway given how things went in the run, so it's actually better that he didn't post a respectable performance because he'd be no price in this type of contest in his future engagements. Jamie Spencer let him coast through the closing stages, so he didn't have a hard race and that'll stand him in good stead. The assessor may give him another few lbs of leeway and although this was a dismal performance resulting in nothingness, I would advise that people don't give up on him just yet. He's a really talented animal on his day and will win before too long.

A trio of selections for today, although each come attached with plenty of obvious risks. They are the type of bets that will prove rewarding in the long run though and that's all that we need to find. The winners will sort themselves out in good time and hopefully there's one or two lurking in the mist for today, as I cannot stand losing runs! I'd take a winner at any price just for a bit of confidence but at the same time it would be stupidity to go down the "I need a winner at all costs" route and we'll stick with the proven methods until all comes right again, which it always does - it just takes a while to happen. Have a good day, take it easy.

Trying to second guess Ruth Carr is something that I don't enjoy doing but she has her string in fine form, does really well at this track and looks to have a chance of enhancing it all with Klynch in this 6f sprint. As a 6-year-old gelding with no fewer than 64 previous outings under his belt, there's no doubting that he's a thoroughly exposed performer and expecting him to defy a mark of 80 - something which he's never done before - doesn't look like a great idea on the face of it. However, he was better than ever last year and put in numerous performances that would have lead to him winning off this sort of rating and it's far from an impossible task, in fact it's very possible. In order to back him here, we have to forgive his latest no-show, which came over 6f at Haydock. That was on rapidly quick ground though and on a straight course. He is very much happier going around a bend nowadays and his previous two outings before that suggested that he wouldn't be waiting too long for career win number eight. On both occasions he ran over 7f, which he doesn't seem to get and he was in the lead looking likely to win both until half-a-furlong from home, at which point he began to paddle and was headed. They were ultra-encouraging though and showed that he retained all of his enthusiasm, as he ended last season with a few below-par efforts. He will be a far better proposition now back at 6f and the ground coming up on the softer side - which is likely here - is a massive positive. The market may tell its own story and Carr does have another runner here, but I feel that she has a good chance of taking this with Klynch and he's worthy of support at the current prices. If it was not for the inclusion of some other prominent racers who could ruin his chances by going off too fast, then I would strongly advise this as an excellent bet but I can't and must advise caution, with the usual stakes being what should be played. This fellow will either run a cracker or a terrible race, but that will be down to what others do and not what he does, because he'll give his all if connections have sent him out to win.

Quite an interesting race is in the offing here and Mubtadi is likely to be a very lively contender if getting a bit of luck during the race, as he's likely to be waited with throughout. This Ismail Mohammed trained 4-year-old hasn't lived up to expectations (originally well thought of when with David Simcock) but he's still open to further progression this season and should be up to winning a handicap or two. Whether he will be able to compete at this sort of level has to be up for question and connections could have found him some much easier opportunities, but his best run last year came when running the progressive Chef to a head in a slightly better race than this for 3-year-old's and maybe he's at his best when carrying lesser weights against superior animals - although that would be strange seeing as he is a big horse himself. The way in which this colt can travel is impressive, suggesting that he should be better than his rating of 80 would imply and I think that he's capable of running well above this mark when the cards fall his way. He has plenty of form on quick ground, but  has shaped really well on the couple of occasions that he has got cut and today's likely ground conditions may be close to his optimum. He comes here on the back of a run a couple of weeks ago, in which he was unlucky in-running over a mile at Newbury. Returning to 7f at a stiff, straight track is something that will suit him if there's a decent gallop from the off. That doesn't look to be a certainty by any means, but the horse is simply too big of a price in the off-chance that the race is run to suit. The experienced Royston Ffrench takes over from a 5lb claimer - who gave an atrocious ride last time out - and that's quite positive, even though his record at this course leaves plenty to be desired. It won't be easy for Mubtadi to win this, but I'm quite certain that he's capable of putting up a bold show at least and hopefully that will happen if he doesn't find this race coming too soon. The usual stakes will do.

Like the previous selection at this meeting, Cara's Request will perform to whatever level based on what others in the race do and that makes him a risky proposition. If he is overly pestered at the head of affairs, then there's little chance of him getting home and he will run a modest race. If he's not forced to gallop too quick too soon, then he will be very tough to peg back at this real front-runners track and could gain a third C&D victory. Recent form isn't on the side of Dandy Nicholls' speedy 7-year-old, as he completely bombed out at Haydock last time out. That came over a mile though, in a race where he and another blasted away from the gates like scalded cats, thus leaving themselves with absolutely no chance of getting involved in the finish. Adrian Nicholls wasn't too hard on his charge though and it looked like a workout as much as anything, at a time when the stable was in dire form. The horse has been off since then and although he could be in need of this, I cannot let him go unbacked due to him getting his conditions and being able to run off a mark of 64. He has won twice over C&D, off marks of 75 & 80, so it's clear as day that he is well-treated for when he inevitably returns to form and with the Nicholls yard being back in good knick over the last couple of weeks, that return to form may be immanent. There's nothing too well-treated in opposition either and this is a nothing race, one that this speed-laden gelding could win doing handstands if he was given a handy time of it up top and coming into it in top form. Whether he will be or not is the big sticking point, but he's a bet at these prices and will hopefully show up well. He's a real all-or-nothing performer, so it'll be a shameful run or a cracking one - hopefully the latter. The market will tell its own story as well.