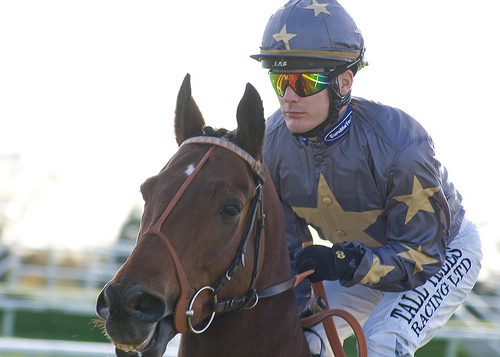 Sheer failure on Friday, although Klynch did run a good race despite being held up throughout, which isn't ideal seeing as I backed him under the assumption that he'd be ridden forward as he usually is. That just didn't happen unfortunately, but it was a performance full of encouragement and he will be winning soon.

Mubtabi never landed a blow at Newmarket, with those on the pace being favoured by the run of the race and he wasn't best placed at all, but was not good enough in any regard. He's one for lesser handicaps.

The other selection was Cara's Request and he drifted before running no race. Just an awful selection.

There was four selections, but one was a non-runner and is removed from below.

Dr Marwan Koukash loves having winners around this tricky track and with a couple of his animals being very prominent in the market, it would be no surprise to see him celebrating yet another Chester victory. His best chance, in my opinion, lies with the Richard Fahey trained Kyllachy Star, a horse who has form to turn around with a couple of these from his C&D run four weeks ago. On that occasion, he finished just 2-lengths behind the winner despite the race not being run to suit and the ground being that bit too soft for him, so it's an effort that you can mark up somewhat. He's also better at the weights with both of the rivals who finished ahead of him and also with the one who was just a short-head behind him in 5th, which is a sure-fire positive. He held every chance coming into the final furlong, but had not travelled well through the race and was lugging away to his left on the run for the line, indicating that something was not right and it was almost certainly the ground. Today's conditions will be soft enough, but not that testing and he does seem to have no problems with good-to-soft ground. That race wasn't run at much of a gallop too, which was understandable given the conditions, and that wouldn't have suited this 6-year-old gelding. Whether he will get a good race-pace to chase after today is up in the air somewhat and adds to the risk involved in this selection, but it is a possible and that being combined with the decent price on offer makes it a risk worth taking in my opinion. The horse is handicapped to strike off 91 at the moment (C&D winner off 3lbs higher in May of last year) and has run cracking races on both of his starts this year, hinting as if his turn isn't far away. Personally, I think that he should be the favourite here and medium stakes shall be played.

No prizes will be won for originality here as I'm siding with Tariq Too, who is the current market leader in his race and looks to have a truly obvious chance of gaining career success number five at what will be the fourteenth outing of his career. Seeing as he is a 5-year-old, he's still in the lightly-raced camp and although now forced to run in very good handicaps off his lofty rating of 91 (20lbs higher than his handicap debut for David Simcock), I fully expect that there's more to come from him. Amy Weaver got a real bargain with this one, as he cost just 13,000gns and won the most of that back for connections with a bloodless victory on his seasonal/stable debut, when routing a good field over 7f at Thirsk. The way that he made ground through the pack at a course favouring the handy type was so impressive and he won the race with consummate ease, despite being off the track for 223 days. That run led to him being sent off as the 8/1 favourite for the 24-runner Victoria Cup, which represented a completely different test to the one he faced a few weeks previous. In the end, all he could muster was a 9th place finish but it was a solid run and he was bang there until tiring at the furlong pole, possibly finding it all that bit too much against some really talented rivals. The return to an easier track will suit and with Harry Bentley on board to take off 3lbs, the horse is effectively just 3lbs above his last winning mark. It's entirely possible that he's better going around a bend, which he does not get here, but this is an easier race than the one he tackled four weeks ago and I fully expect to see a good performance, as does his trainer Amy Weaver. As with the majority of runners around this price, there's not much room for error but he offers plenty of value at the current odds and a medium sized stake should be played. Of the rest, Prime Exhibit should be watched in the market.

Result - Winner @ 7/2; Travelled beautifully and got the job done. Phew.

Frankie Dettori has an excellent 25% strike-rate on the July course over the years and he has got a decent chance of adding to that with the potentially very useful Anatolian in what is a valuable 1m 4f contest. This 4-year-old colt comes here on the back of one run this season, in which he shaped really well for a long time on the Rowley course around five weeks ago. He didn't look entirely straight-forward under pressure, but it was his first start for 225 days and a lack of fitness probably took its toll, as he moved into the race going really nicely before fading out of contention when coming into the dip. He will have improved for that run, as he will have had to and I am quite hopeful that we'll be seeing a more polished performance here, although a few of today's rivals look potentially well-in. This fellow has only raced on 6 occasions though and has looked like the type who will improve for his experiences, so further progression is very possible in due time. He will have absolutely no problem with the cut in the ground and should be nicely positioned throughout the race as well, which looks important given how yesterdays races were favouring those who were ridden handily. The trio at the head of affairs - High Jinx, Mulaqen & Spifer - will be hard to get the better of seeing as they've got plenty to offer the game off their current ratings but all are too short for me to advise as selections and the one that I am siding with may have as much in the locker as they do. The big problem is getting him to show it, but he's likely to have come on plenty for that run last month and looks the clear value call at the current odds, although I'm going to play the usual stakes due to my inability to pick a guitar string at the moment, never mind a winner at the races. He should be up to running very well.

Result - 2nd @ 10/1; Travelled beautifully as well but found one too good.