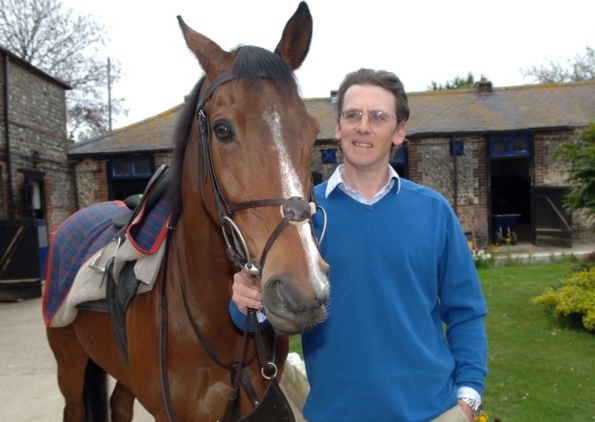 West Coast Dream was quite poor on Thursday but given how easy he was in the market, it's hardly a surprise. He was allowed to stride on as I had hoped and looked to have a chance a couple out but then he faded tamely and could only come home in 6th place. Off his current rating, I'd say that he's being waited with for a turf campaign and he'll remain of interest, especially when the slower ground comes out to play. For now, this goes down as a modest effort but one that wasn't too surprising.

I didn't back anything on Friday but mentioned Hildisvini as being one that I was interested in at 14/1, and typically he went on to win having been strong in the market. Time to start being less cautious, because everything I mention as a possible seems to run well/win. The other I mentioned also ran an eye-catching race but we'll keep him under wraps until again, because he'll be winning before too long.

Another rather impossible day in the offing here. The Imperial Cup at Sandown is just confusing me to the point that I have to leave it alone completely and the few good quality races over at Wolverhampton are so phenomenally tough that I could spend days on them and still end up getting it completely wrong. I have managed to find a couple of selections but both come with plenty of risks and the chances of us landing on a winner today wouldn't be overly strong. Keeping the powder relatively dry until Cheltenham looks like the way forward and we're not too far away now. Have a good day folks and be lucky.

Nick Gifford landed the spoils in this contest back in '06 and Kuilsriver could have an outside of giving his trainer another victory in the race. With no fewer than 18 runners being set to line up, this isn't exactly a great betting opportunity but Gifford's 5-year-old hurdler looks to be on the improve and there's every chance that he'll be at his best in a race that's likely to be run at a good clip over this 2m 4f trip. It's quite debatable as to what he achieved when getting within a couple of lengths of a reportedly decent Nicky Henderson trained horse last time out, but I don't think that Fakenham is the sort of track that overly suits him and flying around Sandown may just suit that bit more. Connections are also reporting that he'll be ridden fairly forward and that's what I'm hoping for. The big field shouldn't pose an issue either as he ran fairly well in the Triumph Hurdle last year and also in this years Lanzarote Hurdle at Kempton in January, a race in which he didn't get too much luck in-running. I'm not sure whether he's good enough to win this race but he has a lot of attributes that I want in a horse for a race like this and 16/1 looks a bit big to my eyes. However, big-field novice handicaps wouldn't be my strong point to say the least and I'm playing it really cautiously by just playing minimum win stakes on him. Hopefully he'll run a big race and go close.

Plenty of disappointing horses lining up for this Class 3 Chase and Sound Stage is once again catching my eye. Caroline Keevil's 9-year-old has proved to be a shadow of his former self on his few outings this season but I think he has had a few nice excuses and his seemingly regressive profile may be a bit harsh to him. One of his trio of outings came over hurdles and on the way to the course there was a long delay, leaving him stuck for a number of hours and it resulted in a complete no-show. He was then off the track for a few months and was in the process of running a decent race back over fences until he came down at the final obstacle over 3-miles at Newbury. His most recent outing was at this stiff track, over 4-furlongs further, a race in which he was ridden rather strangely. James Best, who's on board again here, had him positioned wide throughout and I can only think that it was to give him a good look at his fences in order to gain some confidence. It didn't work though, as he began to make mistakes once the tempo lifted and ended up finishing towards the rear. It was quite an encouraging run for a long way though and now connections are dropping this strong-travelling animal back in trip, which is no bad thing. The ground will be fine and I think the smaller field could be key, as he won't have to go too fast and will get plenty of chances to look at his obstacles. How his recent exertions will be affecting him now is beyond me but the handicapper has cut him some slack and the price makes it a risk worth taking. His jockey is fine value for his 7lb claim too and overall, 11's are a few points on the large side. Small/medium win stakes will do the job and hopefully this previously progressive chaser can return to something like his best.