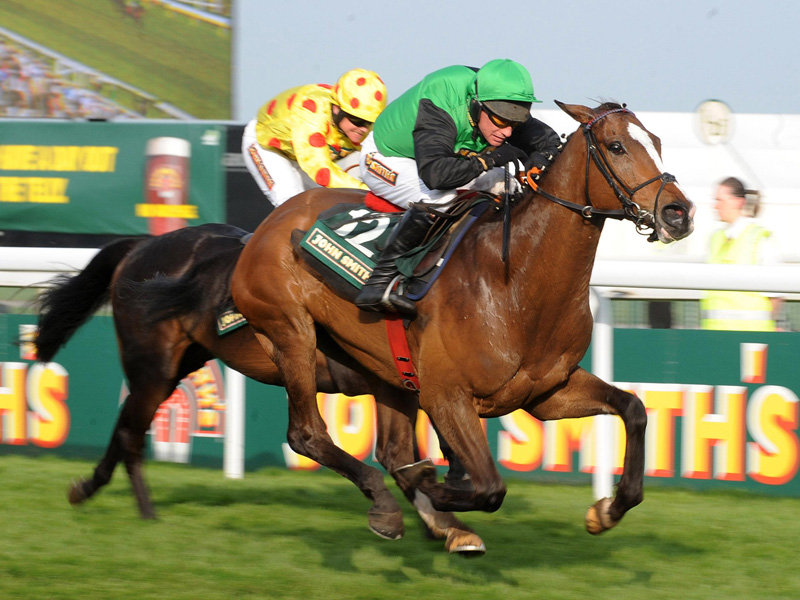 Nothing to shout home about on Saturday I'm afraid. Both Kuilsriver and Sound Stage were defeated, with the former being particularly poor. He was so bad that it can't have been his true running and he's one to keep on side for a while yet. The latter ran a cracker, holding every chance as they sprinted for home but he just got done by a couple of speedier rivals. It represented a nice return to form though and I'm sure that he's back to something like his best. Whether he'll have optimum conditions any time soon has to be a risk but he'll enter calculations any time he's lining out, as he's too well handicapped to avoid.

I don't think I've ever been as nervous about a race meeting ever, mainly because this is seen as the be-all and end-all of the National Hunt calender. At the end of the day, this can either go well or badly and instead of trying to pick the obvious "winners" (which offer little reward for the risk involved), it's value all the way as ever. I just hope that I can give you all some nice-priced winners, some decent profit and a few happy moments! Fingers crossed, because we'll need some luck if it's to end well - last year didn't.

For today, I've got 3 selections in probably the 3 toughest races to get involved in. One is particularly good bet who I expect to run a big race and the other pair are outsiders who could do anything really. Let's hope that one obliges and gets us off to a good start. If not, there'll be plenty more opportunity to get back ahead of the bookmakers before the festival is out. Best of luck folks and pick many winners!

I'm not going near the Arkle because I think Sprinter Sacre will win but he offers no value at the price. Binocular could run a cracker in the Champion Hurdle if all is well but he's not big enough at the current odds, so I'm leaving that alone too and the Cross Country is just a race in which I've no edge (although I'll be roaring on Fortification). The Mares race should fall to Quevega and it's a pointless race as far as I'm concerned. Alasi could run well though and might be a bit of value in the "without fav" market.

It's a bit disappointing that my original selection isn't running in this race, as I thought that he was the real value call beforehand but the highly talented Steps To Freedom doesn't look a bad second choice, even though his price is hardly outstanding in a race of this very competitive nature.  I'm still quite certain that Jessie Harrington's 6-year-old is very good value at 7/1 and he should be completely at home in a race that's likely to be run at a frenetic gallop from the off. As a previous C&D winner, there's going to be no issues with regard to the horse being able to handle the course and the ground will be absolutely ideal.

When he won here, on his last outing in November, he was just a neck ahead of Prospect Wells in a race which hasn't worked out, but that wouldn't worry me and nor is it a surprise to see the bare form being let down. They went very slow up front on that occasion, which is completely the opposite to what Jessie Harrington's strong-travelling gelding would be in need of. Despite this, and a modest jump at the final flight, he battled back up the hill in very game fashion to make it 3 from 3 over hurdles.

Previous to embarking on his hurdling career in September, Steps To Freedom was on the go for a long time after landing the Grade 2 Bumper at Aintree with ease on his seasonal reappearance in April - when trained by Gordon Elliot. It was no surprise to see him given a break since his last outing and seeing as he has no issues with being fresh, it shouldn't pose much of a problem at all. Harrington is more than capable of getting them readied and she has been raving about this fellow for some time now. I think that he has everything needed to win this race and it'll be very disappointing if he doesn't run a cracker. His jumping is very solid, he has loads of speed and he has no problem with staying a very truly run contest, which will be badly needed here. Medium win stakes should be played and hopefully he'll justify them.

I wasn't going to get involved in this race, mainly because it looks a very tricky assignment, but taking a chance on Nigel Twiston-Davies adding another Cheltenham winner with Billie Magern doesn't seem like a bad idea considering what a massive price he is. This frequent front-running 8-year-old is a bit of a character, one that can't be trusted to give his best, but he's very useful on his day and taking on the relative shorties in this ultra-competitive handicap is the best thing to do, as they're too short for me.

Last time out, Billie Magern ran a more than decent race when finishing 3rd behind runaway (17-length) winner The Giant Bolster (a horse whom I rate very highly) in a very good Grade 3 handicap at this track, for which he was 5lbs 'wrong' at the weights. Twiston-Davies' charge had looked more likely to tail-off than to place at one point but he stayed on strongly past beaten horses in the home straight and seeing as that race was run over 2m 5f, the step up to this extended 3-miles will be ideal.

Whether he's good enough to win is the big question mark but he looks nicely weighted, fits in with a lot of the trends that you want for an animal to run well in this race and clearly has no problems with the track (won here on seasonal debut in October). He could do anything from win to tail-off but 33/1 is certainly a value price about him and in a race where I can't have the market leaders, hoping for a shock result is the best route to take. Minimal win stakes will do the job, as it's a race in which I could be very wrong!

Yet another race in which being wrong is more likely to happen than being right but I'm happy enough to take a chance on yet another Nigel Twiston-Davies trained animal and this time it's Educated Evans, a horse who I've had my eye on since he was sent chasing at the beginning of the season. Based on the market and the fact that the trainers son isn't on board, one would look upon this fellow as being the stables second-string for this race but I think that he's the one who is better handicapped and has the benefit of the exceptional Wayne Hutchinson on board - the man who should be Alan King's #1 jockey.

Educated Evans has run over fences on 5 occasions this season and has improved massively for the switch to this code, as he wasn't much of a hurdler at all. In truth, I'm not sure whether he's good enough to win a race like this around here but he has plenty of scope for improvement and the gigantic price makes up for the obvious risk involved. He's the sort of horse that Twiston-Davies can get the best out of too and having raced over around 2-miles last twice, the return to further at this track is going to really help. The better ground is yet another positive too and I'm just hoping that he doesn't act up like he did when running no race at Warwick on his penultimate outing (drifted in the market before the off).

A solid pace to run after will also help if Educated Evans' jumping can hold up and Hutchinson being on board will help in that department. He hasn't run at the track over fences yet but the undulations of Prestbury Park won't hinder him either. His most recent outing - over the extended 2-miles at Chepstow - represented a nice return to form and although he was beaten by 7-lengths, the winner was nicely handicapped and clearly well fancied. The soft ground wouldn't have been ideal either and I think that it's a good run to come here on the back of, even though some other runners come here with more solid form. He is 28/1 though and quite simply, that's too big and has to be snapped up. Small/medium win stakes will suffice and hopefully he'll run a big one. He's definitely capable but could also throw in a shocker, so don't be surprised by anything! Quincy Des Pictons could also run a big race at 20/1.