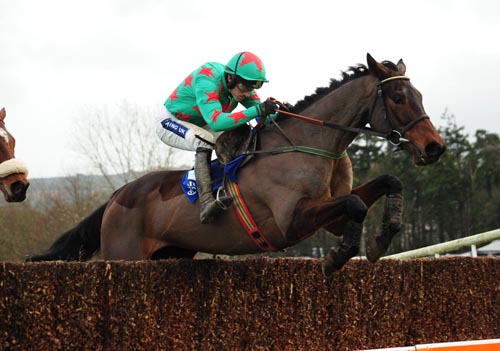 I was hoping that my poor 2011 Cheltenham form wouldn't follow on to this but it sure did and all of my selections ended up being defeated (although the two outsiders' performances were hardly shock results). First up was Jessie Harrington's Steps To Freedom and he was my strongest selection but ended up being the one who ran the worst. After the race, he was reported to have coughed and maybe that contributed to his downfall, as this wasn't the same horse that was last seen in November. There's every chance that he'll improve for the outing and it's certainly forgiveable. I don't think the race was run to suit him in any regard (being prominent was an advantage; he was held up) and it's a pity.

Billie Magern was a 33/1 shot when I was going through the cards and he certainly didn't perform like one, as he ran a cracker to finish 5th place. He was travelling as well as any coming into the closing stages (at which point he was around 3/1) but a costly mistake at one of the last couple of flights stalled his momentum and was the reason why he didn't finish in the places, which he deserved to do. I'd say that he's a nicely handicapped animal and will be interesting whenever he runs at the track again, especially if the quick ground comes out to play. This was a cracking run and I can't have any complaints.

The worst moment of the day was when Educated Evans came to grief at the second last fence, at which point he had no hope of winning but may have run into 4th or 5th had he stayed upright. Unfortunately, he suffered a very bad injury and had to be put down, which is absolutely gutting and one of the sad aspects of the game. One can only feel bad for his connections and this improving chaser deserved a lot more.

Not a busy day for me, with plenty of races in which I feel like I've no edge and there's little point getting involved in those races. The two that I have picked out come with plenty of risks and because of that, they're both standard stakes bets. Let's hope that one of them could do the business and get us rolling. Have a good day folks and best of luck with whatever you're on. It'll be very tough for us punters though.

Chases over 4-mile wouldn't be my strong point but it may be Allee Garde's and I expect quite a big showing from this lightly-raced, Willie Mullins trained 7-year-old. The main worry I have is the jockey on board, as he can look like I used to when I was around the same age as the horse but I'm willing to overlook that (possibly foolishly) and hope that this sound-jumping, relentless galloper can go about business in the manner that I think he can. I actually backed him at this meeting last year at massive prices when he was a novice hurdler running in the Albert Bartlett and although he was beaten a fair way, it wasn't a bad run from one who would always end up being a better performer once tackling fences.

That has proved to be the case since he embarked on his chasing career in December and the form and performances that he has produced are as good as anything on show here, especially as they've come over trips that - although suitable - wouldn't be helping him to be seen at best effect. 4-miles around here will be perfect and his trainer is on record as saying what a lovely mover he is, so the good ground will also help (best form on decent ground but ran sound race in a G2 on soft/heavy last time out). Taking a chance on him at 13/2 looks worthwhile to me and small/medium win stakes will do the job. Plenty of dangers are there lurking about but he does have the class to win this and should have a say, I hope!

Traditionally, those carrying a nice lump of weight don't win this race but Philip Hobbs booking the useful 7lb-claiming James Best to ride the ultra-progressive Featherbed Lane once again makes him look like a decent proposition here at fancy odds of 16/1 (could be bigger in the morning). With 28-runners being set to go to post, the chances of landing on the winner in this extremely competitive race is slim-to-none but I think that narrowing the field to just concentrate on a certain type of horse is the right thing to do.

Having a sound jumper will obviously be important, as they'll go hell-for-leather up front and any mistakes could prove very costly. Backing one who will race prominently looks to be a necessity as well and the ability to travel, stay and quicken even more-so. Featherbed Lane seems to have all of the right attributes needed to excel in this sort of race and the only thing I'm worried about is his ability to enjoy the track, as all of his better form is on flat tracks. However, if something's not proven, I'm happy enough to take risks and there doesn't seem to be any obvious reason as to why he won't handle Cheltenham.

Featherbed Lane also comes here on the back of a cracking effort over 3-miles on very heavy going at Haydock (a Grade 2 contest), a race in which he travelled so well but didn't see out the trip on the ground, understandably. The drop back in trip should certainly help and although he's 6lbs higher than his last handicap appearance, that came another ultra-competitive contest - The Lanzarote Hurdle at Kempton, in which he was an unlucky loser and a nice way clear of the rest. I think that there's more to come but he'll have his work cut out with an inexperienced jockey on board and the Hobbs team look to have a stronger contender towards the foot of the weights in Dare Me. This race will be won by a horse who has a bit of class though and I feel that my selection should run a big race, even though it'll take an exceptional performance to win this of 150 (effectively 143 with claim taken into account). Small/medium win stakes will do no harm though and who knows, he may find the improvement necessary to land the spoils.