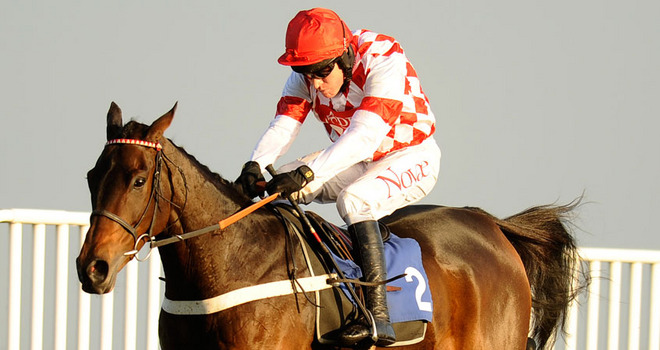 I'm slowly but surely hating the Cheltenham festival from a punting point of view, because I just can't seem to get anything right, despite preparing for this for an age. Everything went the wrong way again today, but I don't really mind about losing money on any given day and would just love to see all of the horses get around safely. Unfortunately, this wasn't the case for Featherbed Lane, who broke down just before he was set down to jump a hurdle and that's absolutely gutting. Given how the race panned out, I'm sure that he would have done himself proud and it's a real pity that this fine-looking, progressive hurdler ended up going wrong. It's an awful cruel game at times but I suppose we just have to motor on and hope for the best.

Allee Garde was my other selection and he didn't have any luck either, as he fell at the mid-point of the race. It would have been interesting to see how he would have got on but given how the race eventually panned out, I'd say that we were on a loser regardless and I had backed him under the assumption that he would be ridden fairly forward. That didn't happen, but at least he managed to make it home safely.

There's nothing worse than hitting a bad run of form/luck during one of the high-profile meets but we've still got a couple of days to make it all better and with 4 selections today, hopefully things will swing in our favour. We're surely due a bit of luck and although two of my selections come with plenty of risk (big-field handicaps = really, really tough), and the others are in very tricky graded races races, I'm hopeful that one could oblige. I won't be holding my breath though and best of luck with whatever you're backing.

With Nicky Henderson's string being in such fine order, it's very hard to ignore his runners and I'm going to take a chance here by siding with Solix, a horse who will really have to brush up on his overly cautious jumping if he's to get involved here. It's not that he's a bad jumper or anything, he just seems to always want to take an extra stride before take-off and he obviously won't get away with doing that here, as he'll be left behind in no time. However, once he's warming to the task in his races, it seems to improve somewhat and I'm hoping that the likely solid gallop will see him in a better light with regards to jumping.

It's also over a couple of months since Solix's last outing and he's only had a few runs over fences to date, so improvement is surely there to be found. It will have to be found, as he doesn't have the form in the book to be expected to go close here but there was plenty to like about his most recent outing, which came on New Years Day. On that occasion, he finished just shy of 2-lengths behind Champion Court at this track over a furlong further in a Grade 2 for Novices'. I expect to see that form turned around, as Nicky Henderson's charge just didn't jump well enough in that race and a stronger all-round gallop will be more in his favour (along with the ground and slight drop in trip).

Peddlers Cross is undoubtedly the one to beat if he brings his "A" game to the table but despite McCain saying that the past week has gone well, I have to have my doubts over the well-being of the horse (can't understand why they'd avoid the Arkle if all was well) and 7/2 is quite a way on the skinny side as far as I'm concerned, so it's best to avoid him. Sir Des Champs is also a very talented animal and still unbeaten over all obstacles but he's another who's underpriced. He doesn't look overly straightforward either and maybe he'll prove to be better suited to more testing ground. Overall, Solix looks to be the one to be on at odds of 8/1 and if he finds the improvement needed in the jumping department, he could have a solid say in proceedings. I'd urge caution though, as if it doesn't improve, he won't run a good race. He's still worth a standard sized bet though and let's hope that the Henderson/Geraghty machine keeps on firing.

This is an ultra-competitive affair but I've long held Barwell Bridge in pretty high esteem and although he's an infrequent winner, there's no doubting that he has plenty of talent and can play a part in this race. Warren Greatrex's 6-year-old has been campaigned all season with a tilt at landing this race being the main aim and I'd be fairly hopeful that he can improve on his solid 6th place in this contest last season when he was just a 5-year-old. Having an extra year under his cap will certainly help and he has looked a much better animal this year based on his two runs in qualifiers for this race (also ran a solid race in a jumpers bumper at Kempton last month - beaten less than 5-lengths & not given a hard time of it).

Barwell Bridge made his seasonal reappearance (first run since this race last year) on Boxing Day over 2m 6f at Wincanton on soft ground. With an inexperienced 10lb claimer on board and a few things being against him, I thought that he ran an absolute cracker to finish just over 3-lengths behind a pair of very decent animals. The form of the race is fairly solid despite the winner flopping next time out and a few weeks later, Greatrex's charge ran an even better race when coming 3rd over 3m 1f at Warwick. I don't think that being held up in a modestly run race like that was to his liking, nor was the very sharp nature of the track and I'd definitely mark up that effort. The return to better ground in a race where they'll be at it from the off should help this fellow and 16/1 looks on the large side to me. Small/Medium sized win stakes again and hopefully he'll run a big race. 33/1 shot Cantlow is probably worth a couple of quid also.

If there were no doubts over Riverside Theatre and his ability to handle the undulations of Cheltenham, you'd have to think that he'd be a fair way shorter than 5/1 in this race, despite it's competitive nature. The basis for doubt over Nicky Henderson's 8-year-old is down to how he performed in the 2010 Arkle, as he ran a strange race in which he looked like tailing-off at one stage but ended up flying up the hill late-on to finish a not-to-distant 5th behind Sizing Europe. With that race being run over 2-miles and the fact that he was only a twice-raced novice chaser, it's easy to overlook that effort in terms of judging his effectiveness on a track of this type. Unfortunately, all the rest of his form is on flatter tracks, so I can't conclusively say one way or another how he'll do but I can't see it posing an issue for this high-class animal.

Since then, Riverside Theatre has developed into one of the finest jumpers of a fence that I've seen and has won the last two running's of the Grade 1 Betfair Ascot Chase, both impressively. He didn't have a run in between either of those after sustaining a stress fracture to his pelvis during his preparation for this contest last year. However, he proved that there was no ill-effects from that injury when returning to win the second of those Ascot Chase's nearly four weeks ago and although the talented Medermit (best-priced 8/1 here) made him work for his eventual 3-length victory, it was a rather comfortable success in the end. The way he jumped and travelled throughout was sublime and with a much better pace being likely here, I expect to see him perform even better if he does indeed handle the track. I genuinely believe that 5/1 is a wonderful value price about Henderson's charge in this race, despite it being one of the most competitive Grade 1 contests at the festival this year, and a medium sized win stake will do the job. If he enjoys the track, he'll put up a mightily bold bid, barring disaster. Great Endeavour (10/1) should also run a big race.

Result - Winner @ 7/2; Everything went wrong and he still won. Unreal.

I can't say that I'm too keen on any of the market leaders here and Fine Parchment could be capable of springing a surprise in a race where many big-priced runners have popped up to become victorious. It's doubtful as to whether Charlie Mann's 9-year-old chaser will be up to giving his best on the back of a hard race less than a couple of weeks ago but he is a 33/1 shot at the end of the day and taking a chance at these massive odds is worthwhile. I also think that he has more than enough about him to be a big player off a mark of 133 in a race of this nature and he has no problem with the Cheltenham track - although his bloodless victory here in 2010 came off a much lower mark (118), but he did win very easily.

Fine Parchment ran a cracker on his seasonal reappearance back in October off 2lbs higher (finished 2nd to well-handicapped type) but was out of form for his following 3 runs between then and January. Mann's charge reappeared a couple of weeks ago at Newbury, in a race that he had won off 130 last year, and that seemed to spark a revival, as he looked like a much more assured horse than he had done over the winter. Some of his jumping was modest though and despite holding every chance in the closing stages, he just couldn't keep up to his work and put the race to bed. With an inexperienced 10lb claimer being on board, his finishing effort probably wasn't given a chance to be seen to its full effects and Noel Fehily hopping back on board is a solid positive. Whether the horse can give his best is no sure-thing but 33's are huge with plenty being to his liking and a minimal win bet will do no harm.