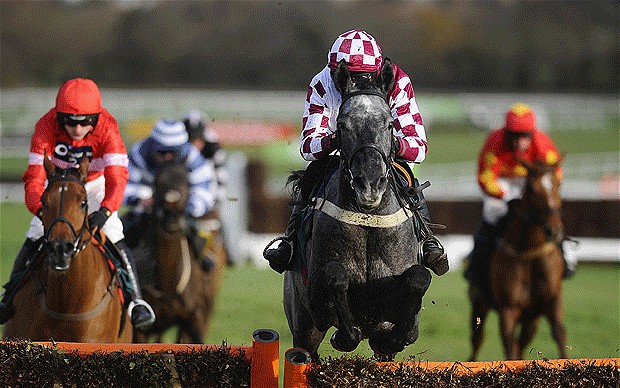 We're back on an even keel thanks to Riverside Theatre and his stupendous guts, jumping and staying prowess. Mid-race, I was fully expecting to be coming back here talking about a hard luck story, as Nicky Henderson's charge was getting bumped and barged around at every fence for a fair while in the race, due to Captain Chris more than anything. However, he got motoring with a few fences still to go, moved himself into contention and gamely powered up the run in to score, rather unbelievably.

This horse has absolutely everything as far as I'm concerned and proved that he has no problems with Cheltenham, so who knows where he'll end up. There's many a Grade 1 to be won with him in coming seasons and it'll be interesting to follow his progress, as there's bound to be more to come. For now, this was an ultra-pleasing performance and he has pretty much saved my festival (18pt loss is now break-even). Credit must go to Barry Geraghty too, for what was one of the finest rides I've ever witnessed.

The rest of my selections, Solix, Barwell Bridge (well-backed) & Fine Parchment all disappointed in their races. The first named just jumped atrociously and will never win at a very high level if he doesn't improve significantly, because it really is poor. The second named was still going fairly well enough and moving through the field when he had to be pulled up, as he had went lame. I'm fairly sure that he could have got involved if it wasn't for that, despite the clueless Racing UK folk saying that "he was never going", which is nonsensical. The last named was just unable to get involved and has to go down as a bad selection more than anything. He'll be one for much lesser contested races if the handicapper drops him a few lbs.

The festival hasn't been the most enjoyable of times but at least the worst we can do is come out with an 8pt loss (was -67pts last year) if all 4 of today's selections end up getting defeated, which I hope won't be the case! On the positive side, THE FLAT SEASON IS NEARLY BACK!! Excuse the caps but I'm so excited about it and the good times will hopefully roll more consistently, although I'm plenty streaky enough in that code too. However, I made over 230pts profit last year and with more knowledge this time around, about +250pts will be the aim and it's achievable I think. Can't complain with how this season has went though.

Have a good day folks and be lucky. It's very tricky though and this could go either way - positively, I hope.

Not too many races are as wide-open and competitive as this but it's usually one in which the obvious contenders come to the fore and I'm banking on that being the case once again. Baby Mix is a horse that I've long held in pretty high esteem and assuming he doesn't go back to the horse that flopped here on his penultimate outing (was too keen, didn't jump well; trainer said he made some mistakes with him), he should have a more than solid chance of running yet another cracking race.

He seems to have everything you want in a horse for a race of this nature and although he can throw in the odd poor leap, his jumping is very quick and nimble when he's on song. Added to that, he gets away from his hurdles very quickly and hopefully Tom George will have Paddy Brennan instructed to send him on should he need to. With the likely strong gallop, Baby Mix should settle a lot better than is usually the case, as he can be quite a keen-going animal and big fields could really bring the best out of him.

Baby Mix comes here on the back of an ultra-impressive victory over 2-miles at Kempton in the Grade 2 Adonis Juvenile Hurdle, which was run nearly 3-weeks ago. On that occasion, Tom George's 4-year-old put in a near-flawless performance when running out a 2-length winner to Sadler's Risk (also 6/1 here). The eventual winning margin doesn't tell the whole story though, as my selection for today's race would have won by a fair bit more had he not idled on the run-in and the way he had dispatched of that rival in the closing stages, I find it hard to see the form being turned around, despite the stiffer track being in the Hobbs horse's favour. Baby Mix will have no problems with the track, as he was an impressive C&D winner on his British debut and I think that he can add another victory here if he behaves. 6/1 looks a grand price to me and a medium sized stake will be played. Hopefully he'll get involved once again.

No fewer than 28-runners are set to line up for this years edition of the County Hurdle, which looks as competitive as ever. Younger, inexperienced horses seem to have a fine record in this race and I'm quite hopeful that Magnifique Etoile can run a big race and potentially enhance that fairly solid statistic. Whether Charlie Longsdon's 5-year-old is capable of getting involved at this early stage of his hurdling career has to be a bit of a worry but his high cruising speed will stand him in good stead and being an above-average bumper performer, you'd have to be inclined to think that he'll have no problem seeing out the uphill finish in what will be a frantically run 2m 1f, assuming that he's still in a good position come the closing stages.

Magnifique Etoile comes here on the back of a run at Grade 1 level, albeit for novices', in which he was a 13-length 3rd of 5. On the face of it, it's not an overly eye-catching piece of form but it was on soft ground and the horse is said to be much more effective on quicker ground, which he'll encounter today barring rain. I also wouldn't think that he was suited by the quite stop-start gallop and it's a run that you can easily forgive, even though it was very decent. Previous to that, he had lined up a couple of times over hurdles in October and December, winning the pair of them by a combined distance of 25-lengths, with sheer ease.

The form of those races wouldn't be anything spectacular but it's a clear indication of the ability that this animal has and I think that he's potentially well-in off a mark of 136, although it may take a while longer before he can defy it. Magnifique Etoile has plenty of room for improvement in the jumping department, which is encouraging given how well he has done to date without looking like a natural and experience should help him for certain. It's over a couple of months since his last run and Charlie Longsdon is sure to have schooled him intensively with regard to his jumping and hopefully he'll have come back as a much better jumper (when he's good, he's very good). Overall, 20/1 looks very generous and I'll take a small/medium chance again. Noel Fehily being booked is a positive and a big run wouldn't be a shock.

Another massive-field handicap which is restricted to conditional jockeys and in usual circumstances, it wouldn't be one that I'd been keen to get involved in. However, Gordon Elliot has sounded bullish about the chances of the 137-rated (7lb lower in Ireland) Toner D'Oudairies in the run up to the festival and I think that he's worth taking a chance on at his current price of 7/1 (which will disappear now that my arch-enemy Pricewise has tipped him, unfortunately). It's possible that he's harshly assessed by the British handicapper but there was so much to like about the way he travelled when last seen (December 29th) at Leopardstown, in a competitive Pretemps qualifier for which he was sent off as a heavily-backed 7/2 fav.

With the race being run over 3-miles on soft ground, Toner D'Oudairies wasn't sure to get home and unfortunately for connections, that proved to be the case. Still cruising going up to the second last, he was around evens in the run and looked very likely to go on to score before the tank emptied, understandably. One would imagine that the subsequent lay-off was in order to protect his mark and he could be lined up perfectly to give Gigginstown Stud another Cheltenham victory. The drop in trip looks sure to help, as will the better ground and there looks to be every chance that he'll love flying around Prestbury Park. There's also every chance that he has scope for further improvement given his age and he has never lined up over this sort of trip (ran 7 times over 2-mile and twice around 3-mile), so it could also prove to be his optimum. Overall, he's a fairly obvious bet and not a whole lot of value at the price but it's a bit big and worth a shot.

Slightly less runners in this one, just the 21 in total! It's not a race in which I'm too excited about but I'm going to take a punt on Nicky Henderson and Barry Geraghty landing another nice £42,000 prize with the speedy, front-running Tanks For That, a horse who loves it around here. This 9-year-old gelding seems to go best when fresh, so it's encouraging to see that connections have kept him off the track for just over 2-months in order to give him his best chance of running well in a race that he performed abysmally in last year - although he is a better and more consistent animal this time around anyway (even without a break).

Tanks For That made a successful reappearance in November 2011 when running out an impressive winner off a mark of 140 over half-a-furlong shorter, beating some decent types without too much hassle. Being 9lbs higher in a better race isn't exactly ideal but his two runs since that victory were encouraging, even though he fell 4 out in the first of those (over C&D). Coming back to this track is certainly a positive and Barry Geraghty riding despite Henderson having 6-runners is another plus, although that occurs for a variety of reasons. All going well, I expect this fellow to have some sort of chance if his jumping holds up on the back of what will be a solid gallop (he mightn't lead, but doesn't need to). 14/1 is not too far away from being the right price, so it's just a minimal win stake for me after taking that into consideration and the overall trappy nature of the race. A good run is likely though and hopefully he'll achieve exactly that.

Rather heartbreaking end to the festival and with a bit of luck, we would have came up on top with a bit of profit. Unfortunately, it ended with an 8pt loss but I'm happy enough with that considering how lucky we were to collect on Riverside Theatre, who had no right to win given what happened to him. That's just how it goes on occasions and at least the flat season is very close now, so a nice return to winning ways will hopefully await. It's certainly high-time for a few nice pints and have a good weekend folks.